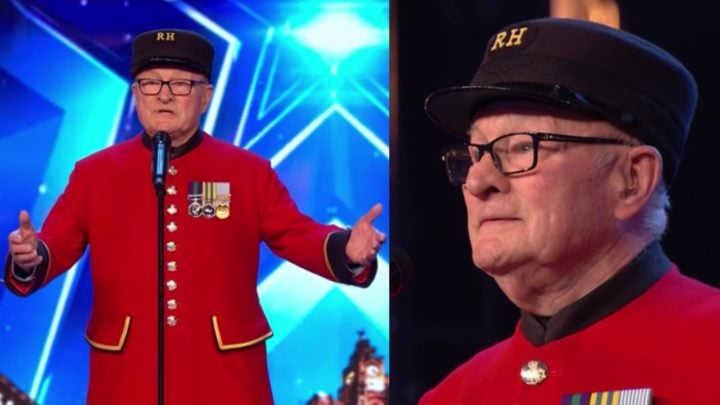 There wasn’t a dry eye in the house after an elderly war veteran took to the Britain’s Got Talent stage to perform a beautiful song, which he dedicated to his late wife.

Colin Thackery, 88, brought the crowd to tears as they watched his touching performance of ‘Wind Beneath My Wings’ which he sung in honour of his partner who had sadly passed away.

Stepping out in front of judges in his Chelsea Pensioner’s uniform, with his service medals proudly pinned to his chest, Colin had the audience completely captivated from the moment he stepped out on stage as he announced his performance.

“I’m going to sing you a song that is dedicated to my late wife,” he said. Before the veteran could say any more judge David Walliams replied: “Colin, I think it’s extraordinary you’ve come here. The stage is yours.”

With his military buddies supporting him in the crowd, Colin began his performance, his beautiful voice echoing throughout the room and leaving everyone in awe.

After he finished the first line of the song the audience gave him a rousing applause, while the judges looked on at each other in amazement. It wasn’t long before the tears began to flow, as members of the audience became engrossed in the emotion of the performance.

All the while Colin’s military friends, also dressed in the distinctive red uniform, proudly watched, with one even wiping away some tears, as they listened to the lyrics.

It was no surprise the veteran received a standing ovation once he finished, with the judges and audience all getting to their feet to show their appreciation for his performance. The room was filled with cheers as Colin looked up in amazement to the hundreds of people clapping for him, before taking a bow.

Taking to social media following the emotional audition, Colin again thanked everyone for their support and explained how much he enjoyed the experience, having made it through to the next stage of the competition.

“A huge thank you to everyone out there for your truly humbling messages of support!” he wrote on Twitter.  “I enjoyed every single minute of that audition.. it is so good to see that so many of you did too.”

Fans were quick to comment, with many leaving lovely messages for the veteran.

“Your performance brought a tear to my eye and that is not something that is easy to do,” one person wrote.

“Well done sir. You made it a truly meaningful and beautiful song,” another added.

While a third said: “Wow! Just watched this right before company came. Opened the door like this [crying]. My guests were very concerned. This is beautiful and I am sure that your beautiful wife is looking down on you and smiling.”