‘What a rotter!’: Sunrise reporter gets rude shock while on live TV 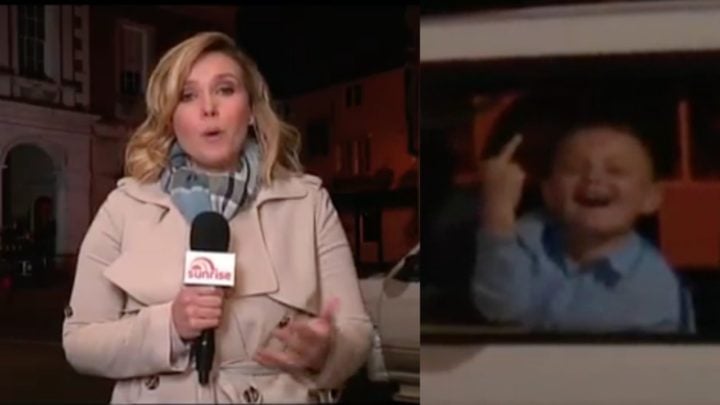 An Aussie journalist received a rude shock during a live cross from Windsor when a young boy gave an unwelcome gesture to the camera.

Sunrise reporter Edwina Bartholomew appeared on TV screens on Monday morning speaking about the imminent birth of Prince Harry and Meghan’s baby when the boy passed in a car behind.

The 35-year-old seemed completely unaware as the white station wagon drove slowly by and the boy began to yell out the window from the back seat. Leaving many in shock and laughter he then proceeded to put his middle finger up.

Later in the program, after the hilarious moment was realised, the Sunrise crew discussed the young boy’s actions with hosts struggling to contain their laughter.

“Speaking of bad parents, what about that kid that pulled up behind me before,” Edwina said between laughs. “What a little rotter. Stuck up his middle finger. There you go, the mean streets of Windsor… wait until I get my hands on him!”

David Koch piped up adding:  “That is the funniest thing I’ve seen in a long time.”

The video of the live cross has since been shared online with many Aussies sharing in the shock of the situation. In the post on Twitter Sunrise wrote: “@edwina_b received an unwelcome guest while reporting from the mean streets of Windsor.”

While some were disgusted by the boy’s actions others saw the funny side of things, joking that the boy was a member of the royal family.

Another wrote: “What a cheeky little bugger. At least he has an opinion and can express it.”

While a third added: “This is completely hysterical! You gotta [sic] love his smile while flipping you the bird!”

Meanwhile people across the world still await the arrival of the Duke and Duchess of Sussex’s first child.

Just days ago it was revealed Prince Harry has postponed his upcoming trip to the Netherlands. However, the 34-year-old is still headed overseas soon for the Invictus Games.

The Duke of Sussex was originally meant to visit the country for two days from next Wednesday, but will now fly in and out on Thursday. The decision has been attributed to logistical challenges.

“Due to the logistical planning for the traveling press to cover visits and engagements by The Royal Family, we have taken the decision to postpone The Duke of Sussex’s scheduled visit to Amsterdam on Wednesday 8th May 2019,” a spokesperson for the Sussexes said in a statement, according to The Telegraph.

“The Duke is currently scheduled to travel to The Hague on Thursday 9th May for the launch of the Invictus Games The Hague 2020 as planned.”

Do you watch Sunrise? What did you think of the young boy’s actions?