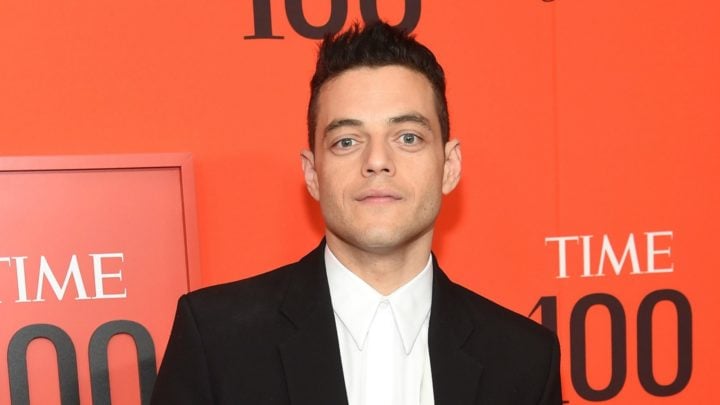 He became a household name after his portrayal of Freddie Mercury in 2018's Bohemian Rhapsody and Rami Malek will star in the next James Bond film. Source: Getty

He wowed audiences last year with his incredible performance as Freddie Mercury in Bohemian Rhapsody and now Oscar winner Rami Malek has been confirmed to appear in the next James Bond film.

While Daniel Craig will appear one final time as James Bond for the 25th film in the series, Malek will take on the role of the movie’s villain.

“I’m very much looking forward to joining the whole cast and crew very soon and I promise you all I will be making sure Mr. Bond does not have an easy ride of it in this, his 25th outing,” the 37-year-old said in a video shared online.

A word about #BOND25 from Rami Malek pic.twitter.com/CLJ5mpO9mu

Details about his character are yet to be revealed, but the film’s plot summary describes him as “mysterious” and “dangerous”.

The announcement was streamed live from Jamaica on the official 007 Twitter page and confirmed the upcoming Bond adventure would be written by Neal Purvis, Robert Wade, Scott Z. Burns and Phoebe Waller-Bridge. The film will shoot in an array of exotic locations including Jamaica, Norway, London and Italy.

“Bond has left active service and is enjoying a tranquil life in Jamaica. His peace is short-lived when his old friend Felix Leiter from the CIA turns up asking for help,” the film’s official plot summary reads. “The mission to rescue a kidnapped scientist turns out to be far more treacherous than expected, leading Bond onto the trail of a mysterious villain armed with dangerous new technology.”

Ralph Fiennes will be returning as M, Naomie Harris will reprise her role as Moneypenny, while Jeffrey Wright, Rory Kinnear and Ben Whishaw will return as Felix Leiter, Bill Tanner and Q. Lea Seydoux, who played psychologist Madeleine Swann in 2015’s Spectre, will also return in the latest instalment.

Others stars include Lashana Lynch, David Dencik, Ana De Armas, and Dali Benssalah. De Armas is expected to star as one of the new Bond girls and previously appeared in Knock Knock alongside Keanu Reeves in 2015. She also worked with Ryan Gosling and Robin Wright in 2017’s Blade Runner 2049.

Lynch, who will also play a Bond girl, appeared in this year’s Captain Marvel.

As for Malek, he beat Christian Bale, Bradley Cooper, Willem Dafoe and Viggo Mortensen to win the Academy Award at this year’s Oscars. In addition to Bohemian Rhapsody, he’s appeared in an array of other TV shows and movies including Papillon, Mr. Robot, Oldboy and Believe.

The new James Bond film is expected to hit cinemas in April, 2020.

Are you a fan of Rami Malek? Will you be watching the new Bond film when it’s released next year?