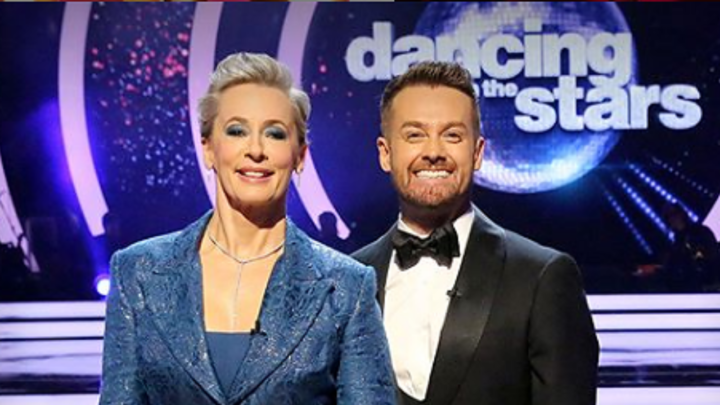 Grant Denyer confirmed he will not appear on Monday night's episode of Dancing with the Stars after suffering an injury at the weekend. Source: Instagram/ Dancingon10

Television personality Grant Denyer has been forced to pull out of hosting duties for Dancing with the Stars on Monday night after suffering a painful injury at the weekend.

Speaking on his breakfast radio show 2Day FM on Monday morning, the 41-year-old revealed he suffered a bulging disc on Saturday while attempting to undertake a home project.

Although in relatively good spirits, Denyer said he is having trouble standing or sitting for long periods of time, leaving him unable to take to the stage for his usual stint alongside co-host Amanda Keller.

During the phone chat with Ed Kavalee and Ash London, the Gold Logie award winner explained he had been in the backyard trying to finish off some odd jobs when the accident took place.

“I was down the paddock mate with my Akubra on, my flannos’ (flannelette shirt), just slamming away on a star picket with a huge sledgehammer and twang – away it went,” he said.

Kavalee then asked for clarification on how the incident occurred questioning: “So you were trying to hammer something into the ground with a mallet?”

“Yes, I’m trying to grow some trees and these trees need to be held up by posts,” Denyer replied.

The TV host’s announcement followed comments from his wife Chezzi earlier in the show, who confirmed the former Family Feud host was rushed to hospital on Saturday afternoon.

“He’s got a bulging disc,” she explained. “It’s quite low down so the problem is when he moves from standing to sitting – he can’t get comfortable.”

This year’s season of Dancing with the Stars has been an emotional one, with actor Samuel Johnson bringing the crowd to tears with his performance last week which was inspired by his former partner’s heartbreaking suicide.

The 41-year-old star appeared emotional as he span his professional partner Jorja Rae Freeman round the dance floor to the song ‘Shallow’ from Lady Gaga movie A Star Is Born, but only revealed the reason for the moving Rumba routine at the end.

“I had a partner… her name was Lainie and she died from a sore heart,” he told host Amanda Keller following the performance. “I’ve been thinking a lot because you told me to be romantic this week, that was the brief.”

He added: “I haven’t been able to be romantic since then, not really. So I thought I’d just try and think of her during the song and maybe that’ll make it beautiful.”

Have you been watching Dancing with the Stars?