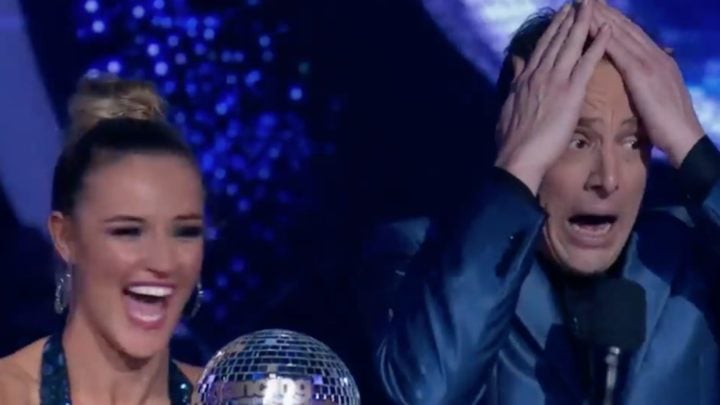 Samuel Johnson defeated Courtney Act and Constance Hall to win the 2019 series of Dancing with the Stars. Source: Facebook.com/Dancing With The Stars Australia

After weeks of gruelling dance routines, the 2019 season of Dancing with the Stars came to a dramatic conclusion on Monday evening. Samuel Johnson and his dance partner Jorja Freeman won the popular reality program, defeating Courtney Act and Constance Hall to take out the title.

Samuel’s sister Connie sadly died in 2017 following a long battle with breast cancer and in addition to taking home the title he won a $50,000 donation for his Love Your Sister charity. Love Your Sister was set up by both Samuel and Connie in 2012 after she dared her younger brother to unicycle around Australia in the face of her terminal diagnosis. More than a million people are now part of the charity which aims to find a cure for cancer.

“If we win, the money would be used to kick cancer in the pie hole like it so thoroughly deserves,” the actor said earlier in the episode. “And anyone who’s interested in my organisation can visit Love Your Sister on their nearest device.”

Samuel’s goal is to raise $10 million in honour of his late sister.

Before the competition winner was announced, hosts Grant Denyer and Amanda Keller revealed the scores from the judges and votes from viewers at home. Constance and her partner finished in third place, leaving Courtney and Samuel to battle it out. When Grant made the final announcement, Samuel was clearly shocked, giving his dance partner a hug and his jaw literally dropping.

Ever so gracious, he ran over to Courtney and her dance partner Josh and gave them a huge hug.

“I love you,” he could be heard telling his competitor. When Grant tried to hand Samuel the trophy, he politely declined and handed it to Jorja.

“Do you remember when I gave you your Gold Logie?” a shellshocked Samuel asked Grant.

“And I gave you a Dancing with the Stars trophy!” the host replied.

“Holy smokes,” the Molly star said. “Jorja must hold this because she’s the real dancer here. What the? Courtney was the better dancer.

“I want to acknowledge Courtney. Oh my god. Do I get to talk now? I’m trying to kick cancer in the face hole Please help me.”

Samuel and Jorja originally impressed viewers with a tango at the start of the series, before entertaining crowds with cha-chas, jazz performances and even sambas. They once left the audience and host Amanda in tears with one raw performance — which saw him carry and throw his partner around the dance floor before ending with a look of agony on his face.

Asked how he was feeling, Samuel managed to say: “All the feelings. Can you feel it?”

Amanda then asked if he felt he’d achieved his goal of summing up his life with his sister, to which an emotional Samuel replied: “I reckon.”

He dedicated another moving performance to a partner he lost to suicide.

“I had a partner … her name was Lainie and she died from a sore heart,” he told the hosts. “I’ve been thinking a lot because you told me to be romantic this week, that was the brief.”

He added: “I haven’t been able to be romantic since then, not really. So I thought I’d just try and think of her during the song and maybe that’ll make it beautiful.”

Viewers at home were delighted that Samuel won and shared their thoughts on Facebook.

One person wrote: “Anyone else burst into tears for him? So happy for him, so deserved, his story is just tragically beautiful.”

Another comment read: “Sam from all of us who have lost someone to cancer, thank you, you fought the good fight, with grace and dignity, and we are so appreciative, spend some time now relaxing and taking some time for yourself, congratulations.”

A third added: “Congratulations Sam and Jorja. You so deserved to win. Sam you are so humble and honest – you put in 120 per cent. So happy for you and your sister would be very, very proud of you.”

Did you watch Dancing with Stars? Are you glad Samuel Johnson won?