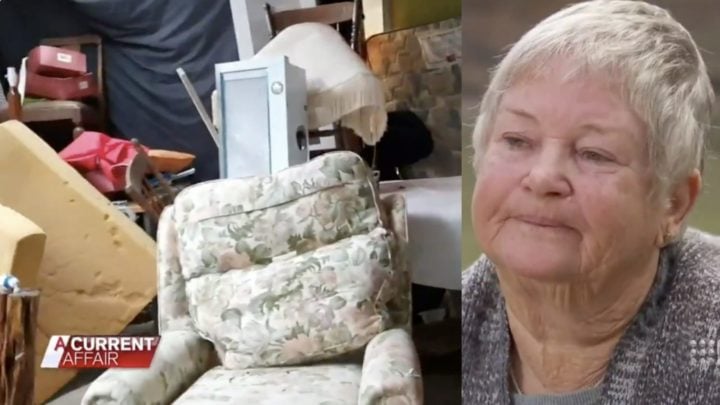 Pearn revealed that the squatter had moved in without her knowledge while she was away visiting her sick father. Source: Twitter/A Current Affair.

A cancer-stricken pensioner has finally been able to regain access to her home, more than two years after a squatter moved into the property and refused to leave.

Julie Pearn revealed her home in Deniliquin, in the New South Wales Riverina, has been left in a “disgusting” state by the woman, named by Channel Nine as Theresa Smith, who had been living there with her children without the homeowner’s permission since November 2016.

Ms Pearn shared her story on A Current Affair last month, revealing her struggle to evict Smith from her home, and on Thursday the program shared an update, revealing Julie has finally waved goodbye to the squatters.

The program aired a video diary filmed by Julie as she returned to her property, which revealed the extent of the damage that has been done to the home, including graffiti etched into wooden furniture and missing appliances, with Pearn telling the show her washing machine and dryer have “gone”.

“Where do I start,” Pearn can be heard saying in the video, as she walks around the house. “This is what they’ve left me. Oh my lord.”

We recently brought you the story of Julie Pearn, whose home was taken over by a squatter. Well tonight, there’s some good news for Julie – and some bad. #9ACA | FULL STORY: https://t.co/rFdhJOdBrm pic.twitter.com/FqDFbg0ToZ

“It’s terrible, it’s heartbreaking, the mess in here,” Julie continues, as she shows further damage including the front door which has been smashed in, and her late dad’s reclining chairs.

She adds: “There is mice crap and mice pee everywhere, and to think they had kids living in here. It is horrific.”

Read more: Cancer-stricken pensioner ‘forced out of own home by foul-mouthed squatter’

Last month, Pearn appeared on the program and revealed how Smith had moved in without her knowledge while she was away visiting her sick father. She had been renting her property out to a family friend at the time, however he moved out and his sister then moved in.

After the episode aired in June though, Smith finally bowed to increasing pressure and moved herself and her children out of the property, leaving Ms Pearn to clean up their mess.

According to the show, Pearn has since contacted the police, however she was told that it is a civil matter and she must take legal action. However the pensioner has secured a two-year AVO against Smith and several members of her family.

In June, Leo Patterson Ross, Senior Policy Officer at the Tenancy Union of New South Wales, revealed to the show: “Squatters rights do exist in Australia, but there are very clear rules around it, and it’s not an easy thing to claim.”

According to NSW laws, a person needs to have been squatting for 12 years before they can claim ownership of the property.

Have you ever suffered problems due to a squatter? Are you aware of the laws?