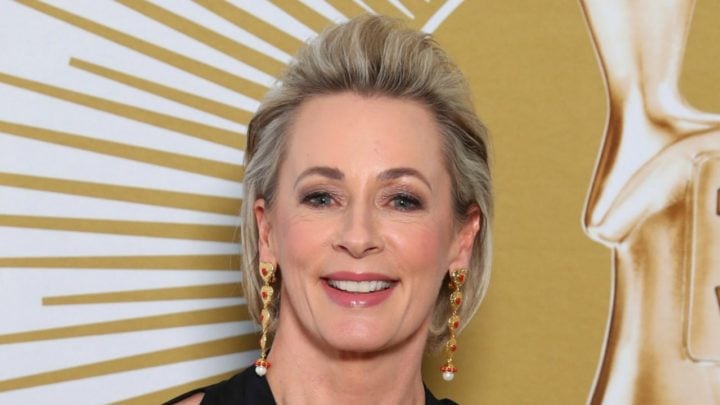 Dancing with the Stars host Amanda Keller has been given a second chance to take home one of Australia’s most coveted awards, the Gold Logie.

The popular presenter is in the running to take out the top prize at this year’s Logie Awards for the second year in a row, The Sydney Morning Herald reports.

Keller will go up against a string of Aussie favourites including The Project‘s Waleed Aly and Sunrise weather presenter Sam Mac for the prize which recognises the most popular personality on Australian television. While Hard Quiz‘s Tom Gleeson, Doctor Doctor’s Rodger Corser, Gardening Australia‘s Costa Georgiadis and Neighbour‘s Eva Morey are also in for a chance.

Speaking about the exciting announcement the 57-year-old said she’s “chuffed” to be nominated again, especially after having to squeeze into tight dresses each week on Dancing with the Stars.

In a chat with 10 Daily, Keller claimed surely she’s deserving of the award having suffered with the struggles of even going to the toilet while hosting the popular show.

“For me to be unzipped, to take off the microphones, go to the loo and get where I need to be, it would never happen,” she joked.

“Having to sip on water – only sip – because it’s a long show, balancing that… I deserve a Gold Logie.”

However, despite juggling a busy workload this past year with Dancing with the Stars, The Living Room and her morning radio show, Keller claimed it hasn’t been overwhelming.

“I did pace myself – I haven’t felt that much busier, but it’s great. I’m chuffed.”

Since the announcement was made Keller also appeared on The Project to discuss the exciting nomination with Aly – who is also named as one of the favourites.

During her appearance on the Channel 10 program the two joked over how they’d celebrate should they win the award which is due to be presented in June.

In the chat on Sunday night Aly claimed: “I would celebrate by knocking on Amanda’s hotel room door, showing her the award and then running off giggling like a school girl.”

While Amanda added: “What I wold do is wake up at 4am like I do every morning to do breakfast radio and I’m going to phone Waleed and giggle like a school girl for a year.”

Are you a fan of Amanda Keller? Who would you like to see win the Gold Logie?