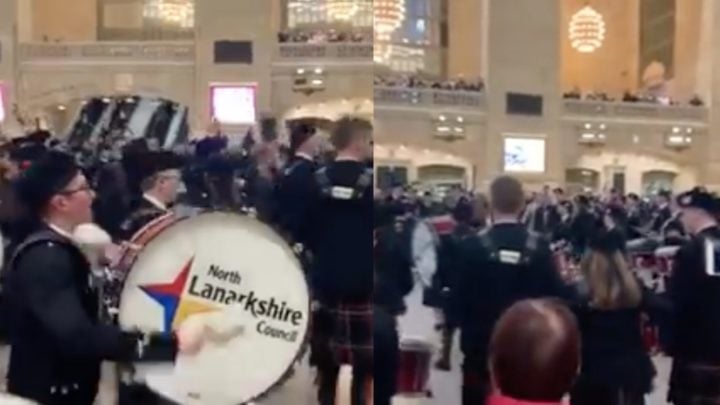 It’s not every day you witness something as incredible as this on your morning commute!

New Yorkers were left gobsmacked on Saturday when a group of Scottish schoolkids started filing into the entrance hall at Grand Central Station playing a rousing rendition of ‘Scotland the Brave’ in perfect unison.

The North Lanarkshire Schools’ Pipe Band brought the station to a standstill as hundreds of travellers stopped in their tracks to watch the youngsters play.

Video of the performance uploaded to Facebook shows the schoolkids entering the famous station with their instruments already playing before gathering in a large circle in the middle of the grand hall to complete the unofficial Scottish national anthem.

Hundreds of people are seen crowding around the young musicians with their phones held high filming the spectacle and looking around at each other in amazement.

Despite showing incredible skills and professionalism beyond their years, the band is made up of teenagers from North Lanarkshire just outside Glasgow.

The school band was in New York for Tartan Day after winning a competition back home to perform at the annual Scottish parade in the Big Apple.

The teens dressed in their traditional tartan uniforms for the occasion and certainly did their country proud with the emotional rendition of the famous tune.

Locals back home in Scotland have already caught wind of the incredible show and took to social media to share their amazement and pride in the talented group.

“So very proud! And this is a shining example as to the importance of free musical tuition for children! Outstanding,” wrote one woman on the North Lanarkshire Council video of the performance.

“Made me cry what a moment well done,” added another.

Another commented: “Wow! Congratulations young folk of North Lanarkshire and your teachers too! What a wonderful achievement!”

The New York Tartan Day parade is an annual celebration of all things Scottish and this year’s guest of honour was legendary comedian Billy Connolly.

Connolly appeared in good spirits as he lead the parade through the city streets with his wife Pamela Stephenson by his side.

His appearance comes after he was forced to reassure fans he wasn’t going to die anytime soon after saying in a documentary that his life was “slipping away”.

Connolly spoke openly about his Parkinson’s and death in the two-part series Made in Scotland and said he didn’t have long to live.

“My Parkinson’s is not going to go away and it’s going to get worse,” he said, according to The Mirror. “My life is slipping away.”

The Debt Collector actor also claimed that he was “at the wrong end of the telescope” and that his life would end soon.

“My life, it’s slipping away and I can feel it and I should.” he reportedly said on the program. “I’m 75, I’m near the end. I’m a damn sight nearer the end than I am the beginning.”

However, days later he took to social media to reassure fans he’d be around for a while longer.
“Not dying, not dead, not slipping away,” he said. “Sorry if I depressed you. Maybe I should have phrased it better.”

The comedian was diagnosed with Parkinson’s disease in 2012.

What did you think of the incredible bagpipes performance? Are you a fan of Scottish music?