Hugh Jackman brings down the house with haunting choir performance 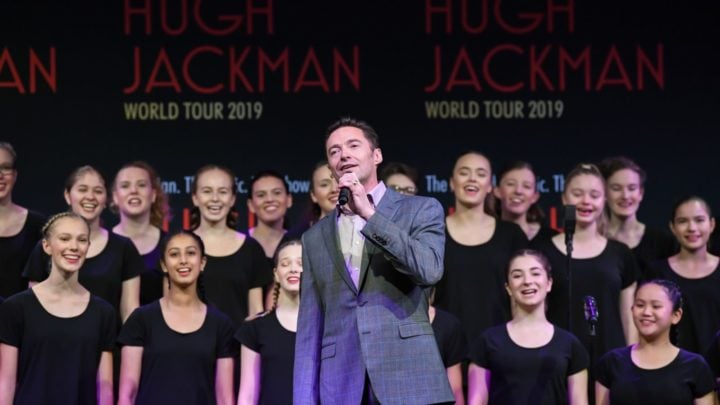 If Hugh's talent wasn't enough, he's performed one of his most iconic songs with up-and-coming talent from Australian Girls Choir. Source: Getty

He’s taking his new arena spectacular around the world and following the announcement that Hugh Jackman’s The Man. The Music. The Show would be heading Down Under, the Australian entertainer gave fans a taste of what to expect with a magical performance.

At a media call earlier this week in Sydney, the Les Misérables star joined the Australian Girls Choir on stage for a special rendition of ‘A Million Dreams’ from The Greatest Showman soundtrack. The song is one of the most powerful from the hit 2017 film and was recently made popular again when singer Pink released it as a single.

At first just the girls from the choir were performing, before Hugh surprised onlookers by joining them on stage. The Eddie the Eagle star showed off his incredible vocals but ever so humble, credited the choir for the stunning performance.

“You guys are awesome,” he said on stage. “I saw them warming up on the lawn at 7:45 this morning. Incredible.”

He also introduced Keala Settle to the audience. Keala famously played the bearded lady in The Greatest Showman and is best known for her powerful performance of ‘This Is Me’ in the hit film. Hugh announced that Keala would be joining him for the Australian and New Zealand leg of the tour.

The 43-year-old American singer then belted out another incredible rendition of the iconic song with the Australian Girls Choir.

As part of Hugh’s tour, he’ll perform some of the most loved and well-known songs from musicals including The Greatest Showman and Les Misérables, as well as other Broadway shows which will likely include his past role in The Boy from Oz.

The Aussie entertainer confirmed he will be accompanied on stage by a live orchestra – no doubt putting on an incredible show following his success in hit musicals over the years. Hugh will kick off the tour in Europe in May before performing to fans in London. He’ll then jet to the United States and his North American leg will begin in Houston, before heading to New York’s Madison Square Garden and Los Angeles’ Hollywood Bowl. He’ll then end the tour in his home country of Australia.

Last month, international fans were treated to a spectacular performance when Hugh opened 2019 Brit Awards with a show-stopping musical number.

The 50-year-old actor opened the awards ceremony with a stunning rendition of ‘The Greatest Show’ from the wildly popular musical, wearing a glittering jacket and even showing off some amazing dance moves. For that performance, he was joined on stage by circus performers in tops hats and tails, fire-breathers and a pyramid of backing dancers.

This is where you wanna be. @BRITs @AtlanticRecords #Gracey #Wallen pic.twitter.com/JlQ5LbM59k

Will you be seeing Hugh when his tour kicks off? What song would you like to see him perform on tour?