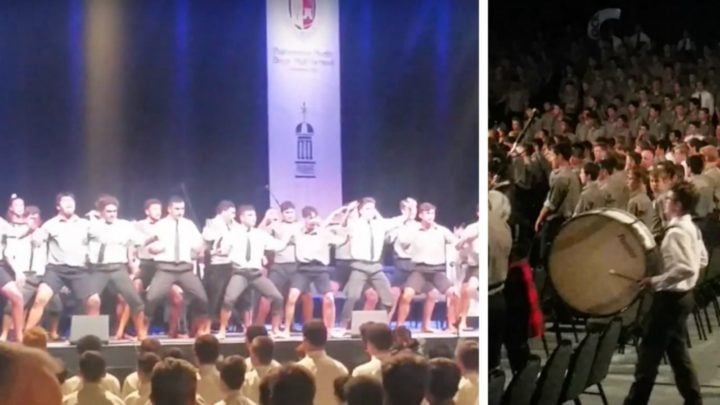 A clip of both bagpipers and New Zealand students performing the haka has been shared online. Source: YouTube.com/jade robertson

An incredible mashup of the haka and a bagpipe performance has been caught on camera and it’s so powerful it will give you goose bumps.

The clip, originally uploaded to YouTube by Jade Robertson earlier this month, appears to show students from Palmerston North Boys’ High School in New Zealand at a prize-giving ceremony. As some students perform the haka on stage, others can be seen walking through the audience playing the bagpipes and wearing Scottish Kilts.

As loud as the bagpipes are, they’re not enough to drown out the sound of the young men performing the haka and the mix of the two very different sounds works fantastically together.

The haka is a traditional war cry or challenge in Māori culture, but in modern times it’s also performed on meaningful occasions. It’s one of the highest honours in Māori culture. Meanwhile, most people associate the bagpipes with Scottish culture.

The audience – made up largely of other students – can be seen watching on in awe as the performance continues.

A second video was also uploaded to YouTube by Robertson which shows the entire audience, as well as the students on stage, performing the haka. It’s equally as powerful as the first video.

It’s not the first time bagpipes and haka performances have wowed people around the world in 2018. In September, a powerful haka performed by the New Zealand teammates of 2018 Dally M Medallist Roger Tuivasa-Sheck stole the show at NRL’s night of nights.

When the 25-year-old took to the stage to claim his prize alongside the night’s other winners, his teammates surprised him with an impromptu haka from the audience. The haka, performed by players including players Issac Luke, Jazz Tevaga and David Fusitu’a, left Tuivasa-Sheck fighting back tears.

Meanwhile, an incredible bagpipe flashmob performing in Victoria, the capital of British Columbia in Canada, was caught on camera earlier this month. That clip began with a single bagpiper performing to a small crowd, before more musicians randomly joined the performance.

After surprising onlookers in the streets, the bagpipers moved to the nearby Irish Times Pub, where, one by one, they marched through the pub doors and surprised patrons of the pub.

What are your thoughts on this performance? Are you a fan of the haka and bagpipes?