‘Steve would be cherishing it’: Terri on Robert and Bindi’s milestones 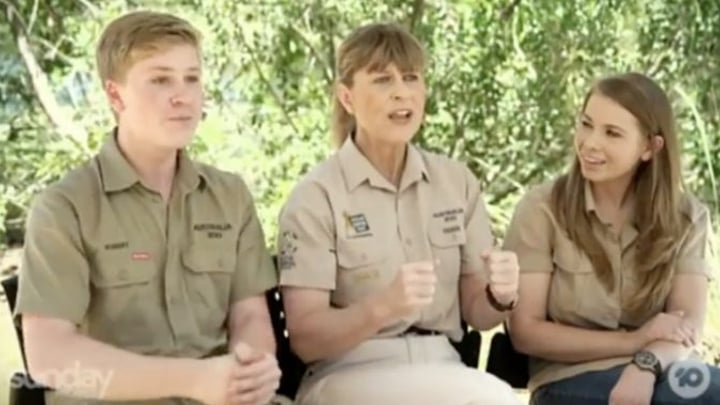 Terri, Bindi and Robert appeared on The Project where they talked about relationships, rumours and Steve's legacy. Source: Facebook.com/TheProject

Twelve years after Steve Irwin’s death, Terri, Robert and Bindi have spoken openly about the legacy of the “Crocodile Hunter”.

Speaking to Lisa Wilkinson on Sunday’s episode of The Project, the family said now was the time to talk about Steve and the impact he continues to have on each of their lives more than a decade after he passed away.

“It just felt like the perfect time in our lives to be able to showcase where we’re at now,” Bindi told Lisa. “I’ve graduated, Robert is doing amazing things where he’s almost graduated as well.”

During the chat, talk quickly turned to Bindi’s relationship with boyfriend Chandler Powell. Lisa explained there was a lot of interest in their relationship and quizzed the young couple on when they planned to get married.

“We will eventually,” Chandler said.

Bindi, 20, also said that she would happily make the news public when it happened. Meanwhile, Terri had nothing but kind words to say about her daughter’s choice in partner.

“He’s a good guy,” Terri explained. “He’s been learning a lot, he’s very kind to Bindi, I enjoy his company, Robert thinks of him as a big brother. I can’t fault him.”

And, while Lisa’s former Today co-host Karl Stefanovic recently joked that Steve wouldn’t approve of Chandler, Terri confirmed it couldn’t be further from the truth.

“I know this is a moment in time Steve would be cherishing,” she said. “Seeing Bindi’s grown up and has a very special boyfriend now and Robert’s going from strength to strength with his schooling and learning new things. I’m very proud, so I know he would be.”

During the interview, Terri also mocked claims that she was romantically linked to Hollywood actor Russell Crowe.

“I am in love with him,” she joked. “I have to admit it. I am desperately and totally in love.”

Being more serious, Terri said she does love Russell, but not in the way gossip magazines make out.

“I do really really think the world of him. He loves wildlife, he’s very considerate about helping what we’re doing and is a great guy.”

Meanwhile, Robert – who at just 15 has taken on the duty of feeding the crocodiles at Australia Zoo – said it makes him feel close to his late father.

And if you were thinking tonight just how much Robert Irwin is looking like his late dad Steve Irwin, here’s proof. That’s Robert on the left, and his dad Steve around the same age on the right. Amazing. @robertirwinphotography @australiazoo #australiazoo #robertirwin #steveirwin #theirwins #crikey #sunshinecoast #australia @animalplanet

“Learning to work with them is just amazing and getting to be right up close to them feeding them, doing exactly what dad was doing is such a special experience,” he said. “And for me, I definitely feel closest to dad when I’m working with the animals that he really loved.”

Are you a fan of the Irwin family? Have you ever been to Australia Zoo?