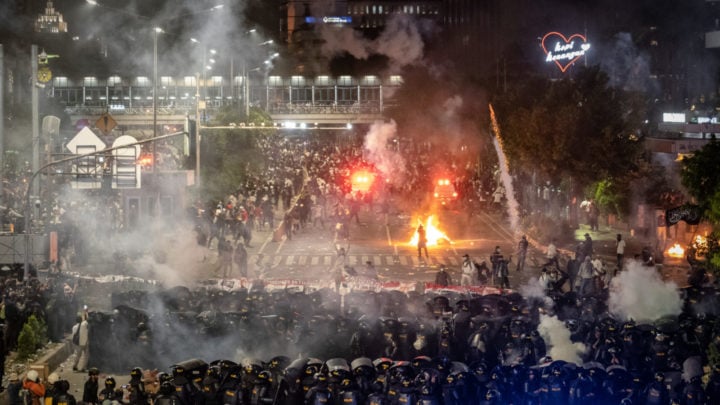 Six people have died and 200 have been injured during wild rallies in Jakarta. Source: Getty

Australians are being warned to exercise a high degree of caution when travelling to Indonesia, including popular destinations Bali, Surabaya and Jakarta, after violent riots broke out following the official announcement of the country’s election result on Tuesday.

Australia’s Department of Foreign Affairs and Trade (DFAT) updated its travel advice for Indonesia on its Smartraveller website.

“Indonesian authorities have advised there is an increased risk of violence, including possible acts of terrorism, before and after the election result announcement,” DFAT says.

The department has also advised Australians to avoid protests, demonstrations and rallies, “as these can turn violent without warning”, and monitor local media for updates.

The updated advice comes after six people have died and 200 have been injured during wild rallies in Jakarta against the re-election of President Joko Widodo.

Travellers are also being urged to reconsider their need to travel to Poso Regency in Central Sulawesi and Papua Province.

Have your holiday plans been affected by this travel warning?