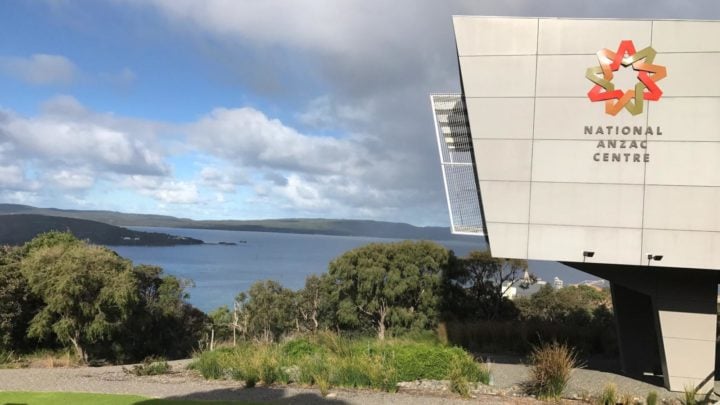 Until I had visited Albany, 430 kilometres south of Perth in Western Australia, I had no knowledge of its Anzac history. My husband and I were on a big lap of Australia from Sydney, New South Wales. Albany sits on a pretty section of the state of Western Australia on the way to Esperance and the Nullarbor.

The main part of Albany is built on a hill, with sweeping views over the coast. The beautiful Princess Royal Harbour (part of King George Sound on the south coast of WA and Albany’s harbour) played a big part in the history of Australia.

Albany is the oldest colonial settlement in Western Australia. It predates Perth and Fremantle and was colonised in 1826 as a military outpost as part of Australia’s resistance to French ambitions. It has a rich Aboriginal and European history. In the late-1800s, Albany was not considered a good location for farming or mining, which is how the whaling industry was born. While Albany is best known for its visitor whaling centre, I was pleasantly surprised to learn of its Anzac history.

On November 1, 1914, the very first convoy of ships loaded with troops on their way to the Middle Eastern battlefields of World War I left from Albany. The Australian and New Zealand servicemen were primed for war and for many it would be their last glimpse of Australian soil. Among the soldiers was the grandfather of my son-in-law, who fortunately returned home. However, many others would lose their lives at Gallipoli and the Western Front.

Just outside of town on Forts Road and sitting on a beautiful vantage point is an impressive statue and the new National Anzac Centre. When we first visited Albany in 2011, we visited the the lookout where all 36 ships (26 Australian, 10 New Zealand) from the first convoy are listed. They were joined by another two ships that departed from Fremantle at a later date.

On our most recent visit, we spent time going through the interpretive centre. The award-winning centre uses multimedia, interactive technology and historical artefacts to create a wonderful memorial to the Anzacs.

It is recommended that to fully appreciate the display, visitors assume the identity of one of the 32 actual service men or women and follow their experience of the Great War. To do so takes you on their journey of recruitment, their training, their life on board a ship, the conflict of Gallipoli, the Middle East and the Western Front, and what life was like for them if they were lucky enough to have returned home.

The building design overlooks the location from where the convoys gathered and then left. There is one room overlooking King George Sound in which there is a water trough with the names of the soldiers etched on the bottom and the water flows gently over those names.

The amount of thought and planning that has gone into honouring our Anzacs is clearly evident at the National Anzac Centre.

It is also thought Albany is the home of the Anzac Day Dawn Service. It is said that an Anglican chaplain by the name of Padre White held the first Dawn Service in 1918 at St John’s Church. Following this service he and members of the congregation marched to the summit of Mount Clarence (the viewpoint from which those first convoys could be seen in 1914) and said that we should always commemorate the troops in this way on Anzac Day.

This Anzac Day, we feel lucky to have experienced Albany and the National Anzac Centre.

Have you visited destinations of Anzac significance, like those of Albany, WA? Is this the sort of travel you like to do?