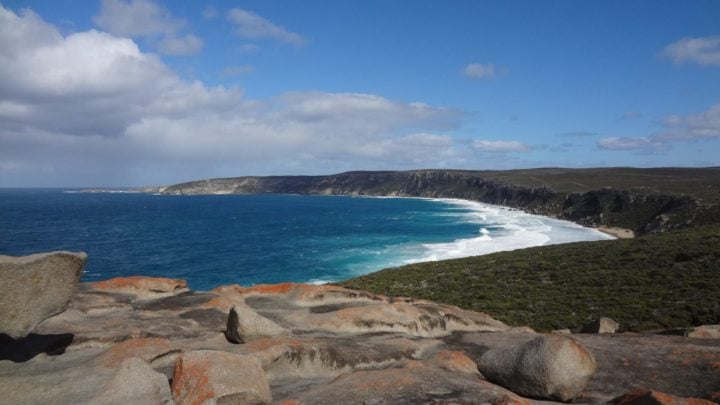 On retirement we bought a motorhome and over 12 years we have travelled extensively around Australia. Somehow we missed Kangaroo Island in South Australia, even though we had ventured close to it a couple of times. After selling the motorhome we decided it was time to visit the island and booked a package deal with friends. It would only be a six day holiday, something we should have thought out a bit more as the travel took a bit out of our older bones.

We left Sydney, flying to Adelaide where we spent two nights. The travel company arranged transfers from the airport to our hotel, but we had to find the central bus station to do our city tour the following day and to also catch a bus the second day to take us two hours to the ferry that services Kangaroo Island. Fortunately, the bus station wasn’t far, but it was so annoying when we had to walk with our luggage and it rained!

The first full day in Adelaide was enjoyable. It was good to discover the city again, we even visited Haigh’s Chocolates to stock up on our favourites. The bus tour took us past some iconic Adelaide sites, including the Adelaide Oval, Adelaide University, beautiful churches, Rundle Mall and historic homes.

We had spare time in the afternoon so decided to get the tram to Glenelg. If I had taken my Australian senior’s card with me, the trip wouldn’t have cost me anything, however it was still at home in Sydney so I had to pay $1.40 each way. Glenelg is a popular beach area with a long pier. We were there during the week so the crowds who would normally visit during a weekend were nowhere to be seen.

Very early the following morning we walked our luggage up to the bus station to board the SeaLink bus to Cape Jervis. We were well on our way before light. We arrived two hours later and boarded the SeaLink ferry and the 45-minute crossing into Penneshaw on the north-east coast of Kangaroo Island. This would be our base for three nights. The Seafront Hotel was a short transfer from the ferry. It has a pizza restaurant open at night, also they serve breakfast. The Penneshaw Hotel and a few restaurants were in walking distance from our hotel.

Kangaroo Island has a population of 4,700, according to the 2016 census. Kingscote is the administration centre and where the most people live, about 60 kilometres from Penneshaw. Agriculture and tourism are the two main income sources. We had two full days of touring by bus, both full days of seeing the best Kangaroo Island has to offer.

More than a third of the island is protected in nature reserves, home to native wildlife like sea lions, koalas and diverse bird species. In the west, Flinders Chase National Park is known for penguin colonies and striking coastal rock formations, like the sculpted Remarkable Rocks and the stalactite-covered Admirals Arch.

Linguria bees are the purest type of bees and are found on Kangaroo Island. Our tour took us to Clifford’s Honey Farm where we sat through an interesting introduction to this amazing species.

We visited two wildlife sanctuaries, had a raptor encounter with our various Australian birds and enjoyed delicious lunches both days.

While we were visiting Seal Bay on our first day, the weather had turned cold and windy. The sea lions were hiding under the tourist boardwalk and we decided it was better to give them a miss so as to avoid being blown away. We had to be happy with our views of the native colony at the lookout. Also from the lookout we could see the Remarkable Rocks, one of the island’s signature landmarks perched above the sea in Flinders Chase National Park.

Our second day was to be spent at Flinders Chase, but the weather remained miserable. We saw a lot of koalas in the wild, one crossed the road in front of the bus, the international tourists were just as excited as we were. Both days on the bus we had a small group of lovely people.

Our departure was early and the day was long, having to rise in time to catch the ferry and then the bus back to Adelaide. We had an evening flight home to Sydney, so were able to catch up with a friend in the city to pass the time. We all enjoyed Kangaroo Island and are proud we can tick it off our travel bucket list.

Have you visited Kangaroo Island in South Australia? What’s on your bucket list that you’d like to tick off in the next year?