‘Can you believe it? The story of Rocamadour, one of France’s most popular sites’ 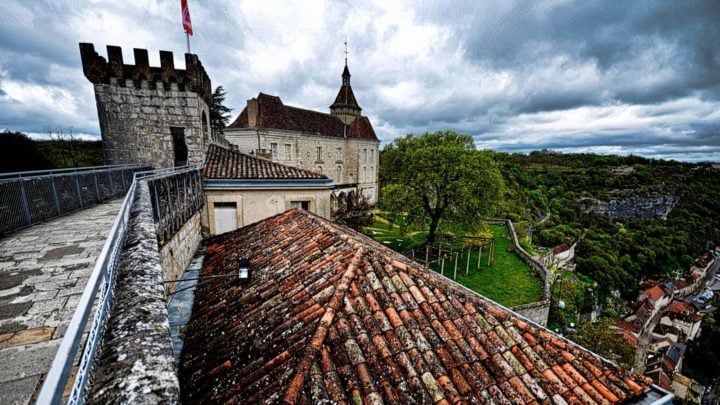 Each year the small village of Rocamadour (population around 600), in the Parc Naturel Régional des Causses du Quercy, receives more than a million visitors. Why so popular? Source: Ian Smith

It’s legendary, a place of serious pilgrimage. Whilst searching online for it before my previous French trip, I’d stumbled on Gorges du Tarn, and went there instead, with not one iota of regret. However, I’d got the name right and this time was not about to miss it.

I have to say, after Gorges du Tarn, the cleft in the earth was just a tad disappointing but, as we sat in the restaurant with the appropriate name ‘Au Panorama’, it was hard not to like. Few are the eating establishments with views such as these. Framed by branches, the vista all the way down to the Alzou river was something special while sipping a beverage.

‘Houses on the river, churches on the houses, rocks on the churches, castle on the rock’, so goes an old saying that sums it up pretty well. The fact there’s only one road in, Rue de la Couronnerie, makes it even more unusual; the fact that it’s open to pedestrian traffic makes it more unique.

Of course, I couldn’t do what most normal people do so, after our wonderful repast, I aimed for the top, i.e. the fort, built in the Middle Ages to defend the Sanctuary. En route we passed a church with accompanying graveyard, before finding a convenient car park right next to the fort.

Though the fort itself is closed, you can walk the ramparts, a stunning introduction to the main course. The spectacular views along the valley and the sheer drop to the sanctuary below with its terracotta tiles and refurbished brickwork are unforgettable. All this prefaces the remarkable zigzag path to the side of the fort that passes lots of shrines, sculptures and, at one point, some sort of memorial chapel cut into the rock face and supported by pillars.

In 1166 an uncontaminated body was discovered. Someone decided it was St Zachaeus (St Amadour). Never mind that Zacchaeus (whose wife, mentioned in the book of Luke, was said to have wiped the face of Jesus) had died about 1,100 years earlier and nowhere near France. This was the first of a few things that determined this would be a religious place. As ever, you need a gimmick to attract an audience and let’s not worry too much about the truth.

I believe the chapel is where the supposed body of St Amadour was found.

Not too much farther down is a statue of St Martial, originally purported to be a contemporary of Amadour. However, it is now well established that St Marital lived in the 3rd, not the 1st century.

Unknown to most pilgrims — then and now — the overall site was previously a holy place of Sulevia, Minerva and Iduenna (a triple goddess integrated by Cybele) and later a Celtic shrine.

Another tall tale, if you care to believe it, comes from the 8th century, when the valiant knight Roland, nephew of Charlemagne, fought a battle in Rondeaux against the Saracens. During this fierce fight, he was seriously injured. Sensing his death approaching, Roland tried to break his sword called Durandal against a rock to prevent the enemy from taking it. But the blade remained intact.

Roland then called upon the archangel Saint Michael and threw his sword with all his might. It miraculously crossed several hundred kilometers to plant itself in the Rocamadour rock where it can still be seen today … Well, there is a sword there, at least that’s real.

According to the Book of Miracles written in 1172, Notre Dame de Rocamadour cured illnesses, freed prisoners, saved sailors and also protected people during wars. Hence you can see models of hanging boats and prisoners’ irons in the Notre Dame chapel.

On May 16, 1535, Jacques Cartier armed a flotilla of three ships and left for Newfoundland. Surprised by the severity of winter, he was immobilised on board the boat La Grande Hermine from November 1535 to April 1536 in the ice of the Saint Lawrence Seaway. Scurvy was decimating the crew. He decided to have them pray before an image of the Virgin Mary and had a mass celebrated, promising to go on a pilgrimage to Our Lady of Rocamadour if God gave him the grace to return to France. Jacques then met the Amerindians who explained the benefits of white cedar tea, which healed the crew. On his return, he fulfilled his promise to thank the virgin at Rocamadour, who actually had nothing to do with the tea; go figure.

In 1562 the chapel was pillaged and burned by the Protestants and the body of St Amadour was destroyed. The statue of the Black Virgin, however, was unharmed. Reconstruction of the shrine began in the 1800s but it was in the 20th century that it truly flourished to the point where it has been declared a World Heritage site.

For us, it’s down to the street below. However, after you’ve passed by some tacky souvenir stores, then you have to do a set of 216 to 233 stairs (depending on which site you believe) back up again to the eight chapels set around a courtyard. All of them on your knees, if you please, if you’re doing penance. We didn’t please but wandered beneath the arched stone gates and kept going.

One hundred and twenty metres in length, the site clings to the rock mass high above a canyon through which flows the Alzou. The houses, roofs and churches seem to be part of the rock itself and I can assure you, while you’re doing your tour, you’ll be glancing up frequently at the overhanging cliff and wondering just when it’s all going to fall. In fact, a huge rock crushed the Notre Dame chapel, which was rebuilt in 1479 by Denys de Bar, Bishop of Tulle.

The medieval stonework lends an authenticity to the site though there is much that has been renewed after several attacks, mainly from Protestants and iconoclasts.
We stumbled in and out of a few of the chapels and got distracted by the stained glass, thus missing the famed virgin statue said to have been carved by St Amadour. Would I love to see a carbon dating on that one!

In the end there was nothing left to do but sit down and savour a delicious ice cream before our ascendancy once again to the top.