‘Of quoits, the charm of exploring Silverton and Broken Hill’ 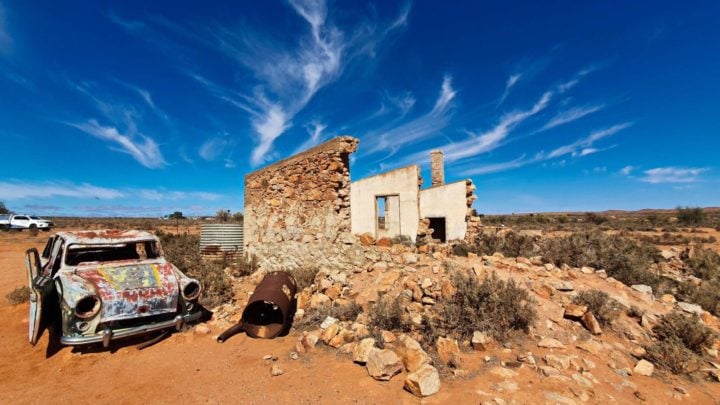 It was time to see Silverton; again. I’d been to this part of New South Wales a few times before; in a hire car, in the motorhome, on a push bike but, never with a tour company. Broken Hill City Sights Tours was the company of choice.

I figured that a local might have some knowledge that couldn’t be gleaned elsewhere. Unfortunately, when it was time to contact the operator, he wasn’t available. No indeed, Milton Hawke Senior was elsewhere, deeply engaged in throwing rope coils around a raised stick, something I certainly hadn’t done for years.

When finally the tour was organised, the minibus pulled into the tourist centre and we were on our way, all three of us, plus Milton. The only other male was encumbered by a crutch and a set of teeth that would excite a pianist. Turns out he’d been at Uluru a few days earlier (before it was closed to climbers) and, at the top, where the surface is a little wavy, his foot gave way. Had a hell of a time getting down apparently. Still, it hadn’t stopped him riding his motorcycle.

A proud Milton then related how he’d won his eighth veteran’s title at the Australian Rope Quoits Championship against a field of 11. There were 53 contestants all up and Milton was the main organiser as well. He said he’d thrown 1,700 quoits to win the title.

We travelled west-northwest, the contrast between almost barren rocky ground and the sky streaked with wispy cirrus was stark in the clear air. Of course, Milton was a font of other local knowledge. When we crested the semi-famous Mundi Mundi Lookout, where key Mad Max scenes were filmed, he wafted about how, below, once was an inland sea, 500 kilometres by 300 kilometres.

Then we visited Umberumberka Dam, a sorry sight at a venue that hasn’t had rain of note since 2011. There was barely enough to sustain a few water birds, the yabbies having laid their eggs awaiting better times, not to break out until the rain finally come. Milton indicated places where previous storm events had rent the earth, scything channels where none before had existed.

We motored back past Mundi Mundi while Milton told us about how Silverton was initially the main mining centre, but its usefulness only lasted 18 years while Broken Hill has now racked up 143. There are many ore bodies out here, but none that are currently viable.

If history is your go, you could do worse than visit the local museum, wonderfully stocked by an active society with a veritable cornucopia of various items. From cheer leader’s outfits to steam engines, it’s all here in the 17 rooms. Actually, the steam engine is outside in the yard.

We took the opportunity for a couple of photo ops at abandoned residences that missed transference and were joined by a couple of donkeys. Milton knew the ropes, he had a couple of banana skins for them as they strode over to his bus. No need to get out. Interestingly, 87 dwellings were transferred from Silverton to Broken Hill. Some real estate here is still worth money though.

The Silverton Hotel was up for sale for those who had a little over $2 million to spare. John ‘Singo’ Singleton put in a $2.2 million bid but they know its worth and wouldn’t come down. The lady who owned it at the time of my visit had a father who was a drover and, amongst other jobs, she was a camp cook. The place is an icon, and icons don’t come cheap.

A little later on the donkeys were on the verandah of the pub looking to enter but, apparently, they weren’t allowed in because it was thought they might make an ass of themselves. Unlike our good selves who partook of pies for lunch, imported from Broken Hill, and tried to keep the sauce on top of the pastry, though it was a tad tricky with the odd shaped pastie.

Milton points out the church, though it doesn’t really need pointing out. There’s only one and it stands alone. A lady named Patsy got it for her 60th birthday after 12 months’ negotiation and installed a one-bedroom unit in the upstairs area. They didn’t realise when they purchased the church that it came with 5 hectares so they’ve decided to rebuild the rectory that was once across the road there.

Milton is something of tainted traveller. He was at Thredbo just one week before the landslide disaster and at Port Arthur just a few days before Australia’s most horrific massacre. I’ll be counting the days for the next week or so.

He also had his own tale to tell; this one about his mining days. There are long wire ropes that dangle in the pits. They’re attached to skips and such that take ore and people up and down. Milton just happened to be standing too close to a coil and it latched itself around his much repaired dungarees, took his legs from under him and he was on his way up facing the wrong way. Disaster was nigh; approximately 20 feet up the coil let go of his dungarees and he fell to an abrupt stop, though softened somewhat by the patches.

From there he had to get out and the first aid person, to put it mildly, failed to react in the right way. Milton was mostly responsible for getting himself to the top. With two fractured vertebrae and a cracked coccyx, pain was to the fore. It took three years of recuperation and a magnetic belt to get somewhere back to normal.

It reminded me of a true story I once heard about a miner who was injured. It was back in the 1930s. As he emerged from the depths on a stretcher the accountant was on hand to record the time, because that was when they stopped paying him; or caring. It’s why the union movement achieved such strength and meaning in these parts. Broken Hill has hundreds of stories, why not go find some for yourself.

Have you visited the outback locations around Australia?