Beyond the rock circle: The fascinating history of Stonehenge 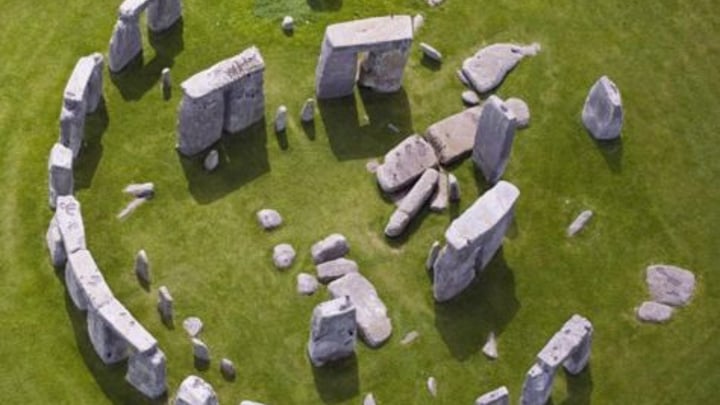 It can no longer be done I’m afraid, but when I was a youngster, everyone could actually walk among the sarsens of Stonehenge, touch them and appreciate their immense size and weight. As late as 1967, visitors could get amongst them; I have a photograph of our youngest son, Ross ‘holding up’ two of the mighty stones. It is no longer possible to do this because the ground around the stones was literally being worn away by the many millions of feet that stepped, stomped and slid there over the years. The authorities began to worry that the stones might at least become loose, at worst fall over — they were starting to act like teeth in diseased gums, ready to fall out if handled too heavily.

Stonehenge — in Wiltshire, England — is one of the great monuments of the ancient world, older than the pyramids, but presenting quite similar problems to the builders of both. No one really knows how they did it, but some of the stones, all of them weighing many tonnes, were brought from as far away as Wales, nearly 200 miles (241 kilometres) from their final resting place.

Various suggestions have been put forward and the most highly thought of is that they were somehow cut roughly to size in Wales, then manoeuvred (with difficulty!) down to the sea, perhaps near where Cardiff now stands. They were then loaded onto what can only be described as ‘barges’, enormous wooden platforms, one for each stone, and ferried all the way around the coast of Devon and Cornwall and along to the area of what is now Christchurch, where the River Avon enters the sea. The Avon flows in its course, to within a couple of miles of the Stonehenge site, and I imagine the task of dragging them that short distance, after the epic voyage from Wales and up the river, presented few extra problems to the people accomplishing it! Of course, once at the site, the stones had to have their final carving and they then had to be stood upright, with other, slightly smaller, stones placed on top of them. A truly epic task, and one which it is believed, must have taken many generations of builders, several hundred years to complete. Definitely not a weekend job for the handyman!

The whole area, for many miles around Stonehenge itself must have had great religious significance to the people who were living and working there at the time. That part of England is richly dotted with stone circles, the largest of which is Avebury, (it even has a fair-sized village in the centre of it, inhabited today), burial mounds, ancient roadways and marker stones, plus the mysterious Silbury Hill, not too far from Stonehenge; it is the largest man-made hill in Europe, and no one has been able to discover why it was built there in the first place – just another of those mammoth tasks ancient men seemed to relish!

Still in the same area of countryside, but modern by the standards of Stonehenge is Old Sarum, the original ancient site of the city we now know as Salisbury (where people get poisoned by Russians nowadays!) though the modern city is now several miles to the south. Old Sarum was originally an Iron Age hillfort, later occupied by the Romans and after them the Normans who built a motte-and-bailey castle there. It was one of the biggest settlements in medieval England, and a magnificent cathedral was built there, sadly now ruined. Even today though, the place is well worth a visit, with many interesting points to admire.

The Wiltshire Downs still play an important, if more secret part in the life of England, not for the ancient religious or commercial reasons, but because the military has taken over a very large part of the county as a training ground for tanks, guns and other reasons, some of them very secret I am sure. There are even villages on the Salisbury Plain that were taken over during the last war and are still used now for all types of training, the original owners of the properties never having been allowed to return, except for occasional nostalgic visits — and even these are now dying out as the original owners die off and the younger generations have no connections with the place.

Have you visited Stonehenge in England? Is medieval history something you are interested in on your travels?