‘The inside story: Discovering an Egyptian treasure trove in Sydney, Australia’ 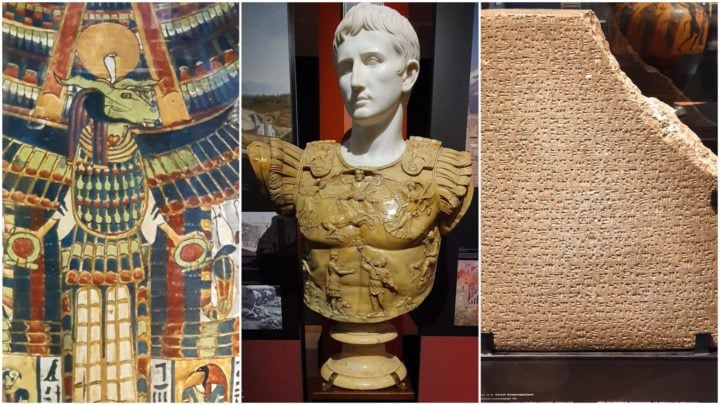 Left to right: Close up of the coffin showing the symbol of Egypt, Sculpture of armour and Cuneiform script, all seen at the Nicholson Museum. Source: Ian Smith

He spoke in delectable English, his voice resonating clearly amongst the huge crowd of four people, all of whom were here because they were genuinely interested, unlike the ‘follow the yellow umbrella’ groups of mass tourism. Though invited, questions and interruptions were few, but informed, only adding to the font of knowledge already available. We were in the Nicholson Museum. One of Sydney’s gems, housing artefacts that constitute the most extensive collection of antiquities in the Southern Hemisphere, I was wide eyed with anticipation.

He stated his claims as to the veracity of being our leader; teacher, degrees, etc., but he could have been the cleaner for all I cared. Though specialising in Middle Eastern history, he immediately digressed to the nearby coffins from Egypt, everyone’s second favourite historical subject. Get the distracting colourful stuff out of the way first.

Here was the coffin of Padiashaikhet, standing upright thanks to a previous dynamic curator Michael Turner, whose visionary outlook for the museum was responsible for a significant climb in visitor numbers. They just weren’t here today, but 80,000 made the effort in 2019. Turner’s efforts to take the tag ‘one of Sydney’s best kept secrets’ off the venue worked to some degree but one can’t help but think the new, soon-to-be-opened Chau Chak Wing Museum at the University of Sydney that will host lots of other art and anthropological items as well, will finally drag the number of patrons in that such exhibitions deserve.

Of course, the mummified body isn’t as advertised on the outside. It’s someone a tad larger whose toes got severed so their feet could fit into the blank space. In fact, about one third of all mummified bodies are in the wrong burial casing. CT scanning has opened whole new world on this subterfuge.

Still, it’s the inscriptions I’m loving. Here are all the gods from the afterlife that look after selected parts of your body in glorious colour. Horus is a good place to start, since the god of the sky is invariably depicted as a falcon and we know how good a raptor’s eyesight is. His right eye was associated with sun god Ra, so the eye was used to symbolise sacrifice, healing, restoration and protection. In between times Ra was being rolled around the sky by a scarab beetle. Such a busy life!

Embalming stuff showing the brain being removed (out through the nose cavity if you please) and the heart being weighed against the feather of truth (bit of a no-brainer that one) were also clearly evident.

At some stage Dr Jamie Fraser, our guide, whose other life is the museum curator (wasn’t the cleaner after all) mentioned in a warning tone that the script also mentions that the name of the deceased should be spoken so that they can live on. Jamie took much care in stressing that he had done his bit.

Then we were ushered to Isis, or at least a couple of pieces of Isis, nee Nefertiti, for that was who the museum originally thought their breast was of. However, an eagle-eyed and brilliant researcher from Chicago visiting the Nicholson Museum in the mid-1990s saw the torso, and recalled seeing a broken head in the cluttered basement of the wondrous Cairo Museum that he thought was a likely join. That he had envisioned the match was truly amazing, because the Cairo Museum has more than one exhibit. Proved correct, a joint project by both museums saw fibreglass replicas made and fitted together midst much ceremony, Egyptian representatives included.

Then on to the cuneiform tablet, more in our guide’s area of expertise. I was amazed when the story came out that this and other tablets were actually set inside clay bricks with the idea that they be discovered decades or millennia later as the weathering broke down the mud.

Cuneiform evolved from merchants recording sales and consists of wedge-shaped marks representing composite sounds such as da or ku. At one stage a significant leap in the decipherment of Mesopotamian cuneiform came from work on the trilingual Bisitun inscription. Henry Creswicke Rawlinson, a British army officer stationed in Baghdad, made accurate copies of this inscription, engraved on a nearly inaccessible high cliff overlooking a valley in Bisitun, Iran. The fact that this inscription included three versions of the same text, written in Old Persian (already satisfactorily deciphered), Elamite, and Babylonian, was arguably the most significant factor in the decipherment of Mesopotamian cuneiform. Shades of the Rosetta Stone.

Cuneiform is continuous around the tablet, so it’s designed to be read from top to bottom and around to the other side. The fine example on show here is actually on loan from the Australian Institute of Archaeology in Melbourne and extols the virtues of Ashurnasipal II from around 874 BC. All the stuff he built and did so people will speak his name in reverence. It was unearthed from Nimrud, that once wonderful historic city that Islamic State (Isis) trashed.

The other thing highlighted was a bust of Horemheb. I’m sure you’ve all heard of him, he came after the lesser known Tutankhamun. Since the latter had no heirs, the able Horemheb took over but this part statue was done during his earlier working life. It’s made out of granodiorite, the same stone used in the Rosetta Stone, but doesn’t have the same smooth finish.

Our hour was up, all too soon for me. I wandered off knowing that I learned stuff none of my friends will be the slightest bit interested in, but I will wallow in for the rest of my life.