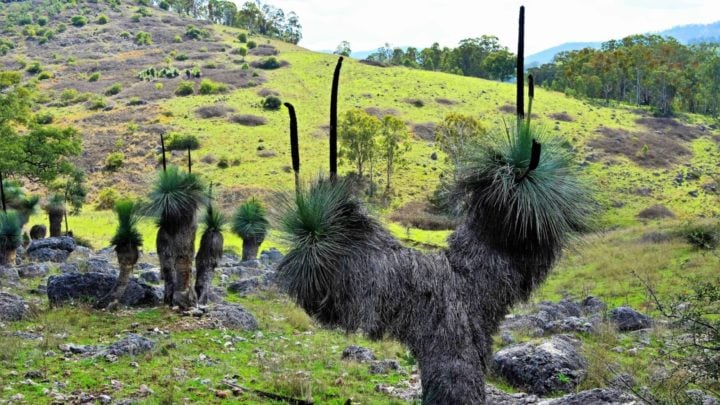 Crawney Pass is not a name most Australians are familiar with. Not even those who live within an hour or so of this place in New South Wales might be familiar with it and yet it has an almost unique feature that many might find interesting. Apart from a road through interesting scenery there’s a stand of grass trees (Xanthorrhoeas for the purist) that those who have travelled the route will, more often than not, mention. “Hundreds of them,” is a phrase frequently used.

Because I was desperate for a day out, I picked it as one of two options to put to Col, my friend in Tamworth, as a suggestion to partially make up for the two day trip to Coonabarabran that was cancelled by our superiors, so called, as in female partners. Col thought that a good idea, subject to research on Google maps, and two days later arrived early on our doorstep to set out on our ‘Boys Own’ adventure; initially plunging south on the New England Highway until, just before Wallabadah, we turned off towards Nundle.

The land, in so many locals’ words, “has never been greener” and “you’ll never see it looking any better than this”. I certainly hadn’t, making it a distinct pleasure just to be out here, looking at the puddling remnants from the recent rains and one smaller elongated pond on the far side of some flowering fruit trees that bade me leap a fence (actually, I strained between some barbed wire fencing) just to get a shot I envisaged. It was to be the start of a memorable day’s photography.

I love going out with other male photographers because they always understand why you want them to stop (even though they may not visualise what you’re looking at) and have no problem going down the road and then coming back or even tarrying awhile as you set up your gear and click off a few frames. This is in direct contrast to the female genre who seem intent on doing just the opposite.

By the time we arrived at Nundle we’d already blown about an hour shooting and a steamy brew inside warm surrounds seemed like an ideal way to spend a half hour. We queried our hostess about the Crawney Pass road and she knew so little about it I had to fill her in.

We headed south until the bitumen finished and noted some distinctly odd corrugated iron structures off to our right. We later learned that two were constructed and then the third, more grandiose edifice, had the foundations and uprights done. That was nine years ago, nothing much has happened since.

Further along on the opposite side was a large barn, utilised for functions such as country music. Col had actually attended a couple and pointed it out, embellishing the view with his information. Then the road started its ascent, winding midst lonely properties and Crawney Pass National Park until we reached the apex, or what we assumed was the apex because there was a sign indicating 905 metres and we were now in the Isis River Soil Conservation Area, which seemed a bit incongruous when it stood right beside a four-wheel drive track that had recently suffered with knobby tyres ripping over it and creating water channels that facilitated erosion. Indeed, it was happening even while we were there.

We moved ahead and came to another rise whereupon another stop was decreed so that we could take in the view. This entailed walking through a gateway, a much more preferable option to climbing over the fence as I’d already done four times that day. We strolled over to the edge of the rim and took in the panorama. Black cattle espied our presence and moved away, as they mostly do, increasing their strides the further away they got until they were almost stampeding down the hill below us. Finally their perceived threat was over and the thunder of their prancing hooves eased until silence reigned apart from a couple of currawongs. A peace came over us as we took it all in, noting the dead logs that had seemingly nothing trying to break them down. No termite mound, no fungi, just dead wood from how long ago one could only guess.

We speculated, wrongly as it turned out, that the peak in the distance would be Mount Crawney, but it wasn’t. We found that out soon after, about 30 seconds after we’d returned to the car and were about to leave in fact.

We could hear a vehicle approaching from somewhere and then farmer Fred and his wife pulled up near us. We surmised quite quickly that they probably had something to do with the property and we surmised right. Fred came over and we had to explain why we’d pulled up (“admiring the view” without telling him we’d trespassed) and he seemed content with that but added that others had been on the acreage without permission and he hoped people would ask first. Of course we would, if only you can find the owners!

Fred told us they’d had half a metre of rain since June 1, which was heading into record territory. The bits of the Isis we’d seen reflected that because it’s usually a trickle at best in the upper reaches but today it had the distinct appearance that it might be something you could call a river.

We parted company and the road wound downhill for a kilometre or two until we spied another pleasant creek setting to photograph. Out beyond it, on slightly higher ground, was Fred’s house or, more specifically, Fred’s brother’s house because he just looked after the property for his brother who was, as they say in Australia, a ‘Pitt Street Farmer’, residing in Sydney.

As we yet again broached the boundaries and settled into some stream side photography, Fred and his wife drove by but thankfully didn’t hassle us as we’d assumed he’d given us unspoken authority when he said he wasn’t worried about our type of person.

He’d tipped us off that the Xanthorrhoeas weren’t that much further but soon after we stopped to shoot a standout weathered gum tree and decided to take lunch. We’d been munching, drinking and reminiscing for 10 minutes when I just happened to glance across to the other side of the road and there, in the near distance, was a significant stand of our sought after trees. Taking in the direction of the road we figured a few hundred metres down the way would bring us to a better spot to view them and so it transpired. The next batch were only about 3 minutes’ walk and there were hundreds of them.

We ventured this way and that in our excitement until, about 20 minutes later, my camera battery ran out just when I’d reached the furthest point I’d intended to go. That necessitated a long haul back to the ute, calling out for Col all the way because I guessed I might need the keys.

He never replied so I found myself trying the doors to no avail and then having to climb the hill for the third time until I eventually found him and he complained that I always rush off and leave him, which was probably right. He also said he’d heard me but his replies hadn’t carried to me. Anyhow, I got the keys and changed cameras because the spare battery for the one I’d been using had been lost at my Bangalow Creek excursion a couple of weeks earlier. Funny how things come back to haunt you.

Hiking up the hill for the fourth time I started to feel fatigue, the muscles starting to get reluctant to stretch out once more but the need for more pictures driving me upwards. Occasionally I came across wounded examples of the species and I could but reflect on my experiences at Esperance when I went on a hike and came across several crumbling versions of the grass tree, all devastated by phytophthora, a relative of the fungal disease that caused the potato blight in Ireland. According to one authority over there, it’s causing more damage than climate change and mining combined, so now, every time I see a damaged one, I wonder if it’s suffering the same fate.

After an hour we hit the road again and it was only about a kilometre down the road when the bitumen returned. Suddenly we were on a good road surface and the reason became immediately apparent because the bitumen ends exactly where there’s a limestone quarry.

Still, it was good for us also as we followed the Isis to Blandford, a nondescript village where I recently got booked by the speed camera, and then turned back towards Tamworth, stopping at Murrurundi as advised by Col, at a special place called Nelliebellie’s. Now, I thought I had good knowledge of the Murrurundi scene but this was on the opposite side of the road to where I used to pull up. It was seemingly run by two affable ladies whose bouncy disposition made you want to stop and soak some of that up anyway.

They also have a small library of books for sale for a pittance, yet another attraction for Col and I, except that, as a professional book reviewer, I get a lot for nothing these days. Still, it’s wonderful to see that book reading is still promoted.

We adjourn to the outside tables and chairs on the back lawn; very rustic and very relaxing, before a large serving of some cake was served up with a dollop of ice cream and cream. That and the chai latte left us full and wondering what we were going to tell Col’s wife, Sue, who was at home preparing the evening fest, when we found we were too full to stomach any more. Just have to wing it through without fessing up, as I usually do.

What are the best experiences in nature you've had while travelling?