‘My ultimate Italian experience: From Florence to Genoa in five days’ 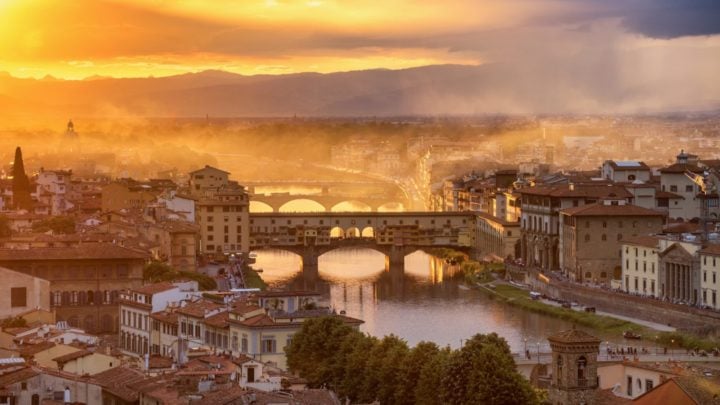 Having already taken the Eurail into Italy, my second train trip was to Florence in the country’s Tuscan region. It was interesting and we met a real live puppeteer, Thomaz, who loved telling us his story. I had so longed to see Florence — for a long time I had dreamed of standing in front of Michelangelo’s David, of seeing all the wonderful architecture, of exploring the streets.

Our accommodation was right on the Ponte Vecchio and it could not have been a better location. As the taxi driver turned in that direction the most famous area of inner Florence brought us to a standstill. You could not see any part of the roads for the thousands (no exaggeration) of people in front of us. It was the day before New Year’s Eve and the amount of people was actually a little scary.

After arriving, very slowly at our destination, we met our host. This man was very rude, continually talking on the phone and unlike Guido from Venice, explained very little about our accommodation. The apartment could have been nice … had it been clean and stocked as promised on Airbnb. Disappointing, but we had to make the most of it. We were only in Florence for two days.

We ate in a quaint little restaurant, with friendly staff and had a drink or three — surprise. We tried walking through the streets but it was almost impossible and now the cough I had developed was making walking very difficult for me.

We gave up and were content to watch the activity from our apartment window, which overlooked the famous Ponte Vecchio bridge. The bridge is renowned for the shops that occupy it, once butchers the tenants today are mostly jewellers, art dealers and souvenir shops. It is almost unrecognisable as a bridge spanning the Arno River. During the war, it is said, that the bridge was spared destruction, because Hitler liked it so much.

New Year’s Eve also happens to be my sister Nola’s birthday. We headed out early and basked in the glory of the beautiful architecture. The statues stood regally, the buildings in all their glory; I was amazed and captivated.

Photo after photo, inscription after inscription and, of course, Pinnochio. Carlo Collodi wrote the enchanting tale of Pinocchio back in the 1880s and evidence of his being born in Florence was everywhere.

The highlight for me was of course Michelangelo’s David. I was a bit disappointed in Florence, feeling it was way too commercialised, but I was not disappointed in the architecture of the city. Our celebration of my sister’s birthday was a tiny cup of local gelato each, costing nearly AU$40.

On New Year’s Day, I left my sister as she was heading for Brussels, her year-long journey was nearing its end.

The following day I had to leave my sister. She headed for Brussels as her year long journey was nearly at an end. I would miss her and Greg, who had become a new friend. I found myself on a very dark platform at a very dark Florence train station, waiting to head to Genoa, the home town of a friend I met online through Starts at 60.

Genoa in Italy’s north-west is much larger than I had imagined and I was staying in a very elite part of the city, in a very ‘Italian’ hotel. It was more than 100 years old. The top half was still occupied by it’s owners and the rest was accommodation. I loved it, it was everything it said it was.

My friend Maresa took me to the Italian playground of the rich. The boardwalk was full of people and their canines, enjoying unusually good winter weather. The houses and boats were massive and the beach was overflowing. I marvelled at how everyone laid on stones to sunbathe, not sand like we do in Australia.

The following day we wandered through the narrow cobbled streets in the heart of Genoa, passing the home of Christopher Columbus and many more monuments. The old buildings and churches were amazing.

I lunched with Maresa and her friend Lorella at their quaint and historic home. Then, my journey was at an end.

My dream of travelling overseas, despite my COPD (chronic obstructive pulmonary disease), had been realised. It had been an adventure and I made many new friends along the way.

Looking back on things, I found most of the challenges in and around the airports. Ground crew in some places were difficult and the Beijing airport was frightening for me, but these are experiences that formed part of the journey.

I returned home, with a lifetime of memories, new friends, special mementos and I had the best time with my only sister. The virus I’d developed hindered and lingered, but I’m hardly going to complain about it when I look at the experiences I’ve had.

Having COPD, made life a little difficult, but not impossible. Never say never, never give up. Italy, we finally met! Austria, you were my surprise and the love of my life.

Have you been to Italy?