‘It was a sign from above: Why I chickened out of my Japanese onsen experience’ 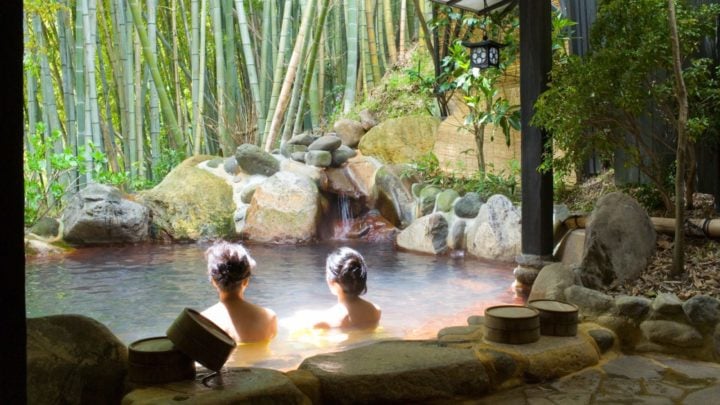 The Japanese people have believed that onsen water has a multitude of healing properties, which is why Jenny was so keen to give one a go. Source: Getty Images

On a recent trip to Japan I was excited to be going to places that has onsen, or hot springs. In fact, before I’d even arrived in Japan I’d considered I would be partaking in more than one dip in a hot spring.

Since time began, the Japanese people have believed that onsen water has a multitude of healing properties. It is said the water is packed full of minerals that are thought to be good for your skin, circulation and general health.

Onsen baths can be made from materials such as cypress wood, marble and granite, and are often situated in areas of outstanding natural beauty or attached to lovely traditional inns. They can be absolutely beautiful.

In the knowledge that a dip in the onsen is supposed to be very good for all matter of complaints, I packed my swimwear and towel in readiness for the experience. I was looking forward to having my painful joints eased, my skin made soft and smooth, and the stresses of life removed.

Ask any Japanese person what their favourite thing about Japan is and they’ll most likely say onsen. For such a well-loved pastime, onsen are also probably the scariest part of Japanese culture for most foreigners.

Before arriving in Japan, I read up on the rules of public bathing. First and foremost, no clothing, swimwear or anything like it is to be worn in the onsen. At this revelation I was taken aback. I, of the larger variety of women, naked in public? It was almost too much to comprehend.

I immediately doubted my confidence to appear before others in my skin only. One thing in my favour though was that women and men had separate onsen. This helped calm my nerves a litle. At least no men would be present.

But I did wonder how the super slender Japanese women would cope with a whale-like creature in the midst of their onsen.

The next rule is that everyone must have a shower before entering an onsen. This is to protect the pristine waters from any contamination. No soap or shampoo can be used. Save that for the shower beforehand.

Every onsen has a row of showers around the edges. Soap and shampoo are provided as well. A small stool is there to be used while showering as it is considered bad manners to stand and shower. One must also be careful not to splash the person showering next to you.

At the onsen, I would be provided with a small and a large towel. Also a basket in which to place my clothing.

The large towel was for drying myself and was to be left in the change room along with my clothes. The small towel was for washing and could be taken into the bathing area. I discovered that you can take your small towel into the bath with you, but you mustn’t let it go in the water. Most people sit it on their head whilst bathing.

The small towel is also used to discreetly cover ones privates while walking from the shower to the bathing pool. I doubted it would cover much of my body. A bit akin to a postage stamp on a letter.

The more I read the more I was filled with dread.

If you have long hair, wrap your hair in a small towel, as even if you’ve just washed your hair under the shower you should take care to make sure that it doesn’t go in the bath water. No one wants to see hair floating around them. In fact, even if you don’t have any hair you should refrain from putting your head underwater, it is just not considered to be hygienic.

Tattoos are a no no. Persons with tattoos are best to bathe in a private indoor onsen.

Excessive noise and alcohol are also banned in public onsen.

Despite all this information, I decided it was still something I wanted to try. The best time would be around 4am as there would not be many people in the area at that time.

I woke just before 4am and gathered my courage. Just as I was about to leave my room, an earthquake struck. The building shook and rattled for several minutes. Surely this was a sign that the gods were warning me not to show my nakedness to anyone else.

That was it. The decision was out of my hands. I never did experience the onsen.

Have you visited Japan? Did you indulge in an onsen experience?