‘Indulge in the natural beauty of France’s Cascades du Herisson’ 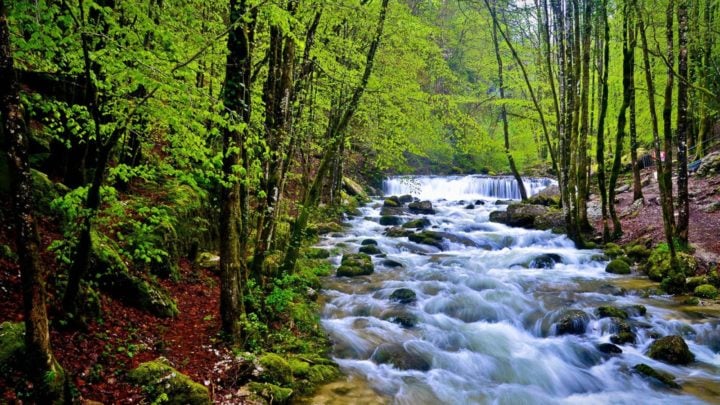 The source of the Hérisson is at an altitude of 805m, and the river tumbles down the slopes in spectacular waterfalls. Source Ian Smith

I’d seen them on a map, we were going past; what other reason to you need to view something? Les Cascades du Herisson (The Hérisson Waterfalls or Waterfalls of the Hérisson) in Menetrux-en-Joux, France is not writ large upon the tour companies lists, probably because it involves walking and we know how many travellers are reluctant to leave the comfort of their bus/train/ship (tick whichever is applicable). They’re located not far from Switzerland in the Jura region of France. Indeed, we’d started at Geneva.

The tidings were not good, weather-wise, though I suppose that depends on what you’re after. We were there to view waterfalls and, as any dedicated cascade seeker will relate, they’re always at their best after rain. Hopefully that would apply while it’s actually raining as well, as we were soon to find out.

We checked in at La Maison des Cascades to get some idea of exactly where we were either going or should be going. There’s also all manner of souvenirs to be had on the shelves for the aspiring collector, but we were on a mission. Once we’re on our way we soon pass by the ruins of the Jacquand Flour Mill (1482-1802), one of several mills and forges that once utilised the hydro power available.

It’s something more than a walk in the park though, but the 7.4 kilometres up and back route isn’t overly arduous for the seasoned hiker with only 250 metres gain and you’re not going to get lost. The only catch is that, as you’d expect when it’s wet, the route is slippery in places.

The forest was lovely and had a special feel about it. Splashing along the trail that was like a tiny river itself in places, we were soon beholding the spectacle of waterfalls in several directions. Off to our right was a minor stream called Tuffiere (suspect a corruption of the word for truffles) that tumbled down several large steps indiscriminately and was worthy of a look but that would have meant crossing the flooding Herisson itself, and that wasn’t going to happen.

Luckily we had our wet weather attire on; if it wasn’t the rain itself it was the drips from the leaves that conspired to drench us. For some reason, I suspect the thrill of exploration, our discomfort was minimal as the rush of the river melded into, and was soon blocked out by, the roar of the torrent crashing down L’Eventail (fan like), the first of the major drops. You could only make yourself heard whilst shouting and thus our conversation with the first, and only, couple that we saw was brief.

We came across them at the main lookout for L’Eventail where the promoted image of the area, the country that breathes, seemed so appropriate as we sucked in air after our first ascent. There are three waterfalls (of seven) over 35m and apparently, at 65m, this is the most impressive. The broadness of it reflected the volume of water that was currently invading the area. That we were lucky is emphasised by the fact that the falls aren’t open all the time because the flow is decidedly seasonal.

Higher we strode until, above L’Eventail, we crossed the river on a bridge before the trail led upwards on a made staircase. Here we decided to eat our meagre self-allocated rations before pushing on to Le Grand Saut (the Big Leap), the second highest major drop. Though there’s a riverside path, for once I didn’t transgress too far onto it because it was closed due to the danger of rock slides in this wet weather.

Looking down into the abyss from above we decided this would be enough for us on this occasion, opting for the blessing of dry clothing when we returned to the car. Small rivulets beckoned us back to the warm safety of the vehicle as we passed several rivulets trying to make an impression on the landscape in their own way, adding to the charm of the place.

If nature and waterfalls are your thing, you’ll find much to please you here and you don’t have to worry about it being overcrowded, though it is popular when the weather is more clement. Added to this is the bonus of nearby Lac du Val, where we stopped to photograph some fishing boats beneath the overcast skies and the dripping rain, the only thing spoiling the surface of the millpond-like waters. You could but imagine yourself being here and enjoying a picnic on a sunny afternoon. Les Cascades du Herisson ticks a lot of boxes.