‘The trouble I encountered while travelling solo in Hawaii’ 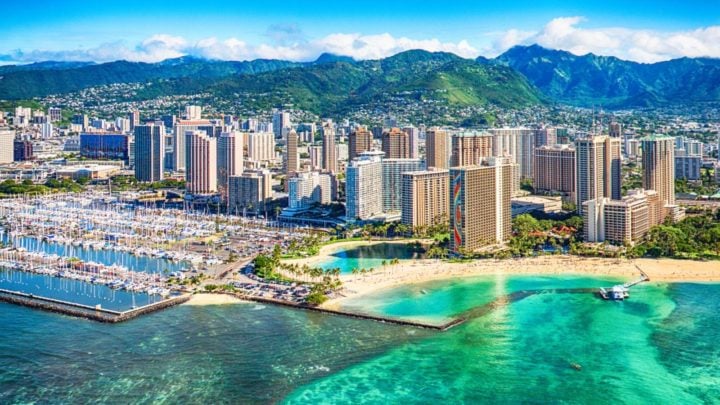 Oh dear … A senior moment indeed … I forgot about Maui, Hawaii. Some might call it a broccoli moment … When you are looking in the fridge for the round green vegetable, that you cannot remember the name of.

It was great pleasure that after five days our time at sea had come to an end and we were tendered in Maui, one of the largest Hawaiian islands. At last, the Americas! Immigration was relatively painless; we were expecting something more onerous. An old whaling port, Maui seems to have been dedicated to mermaids. There were mermaid statues, mermaid lanterns and mermaid garden ornaments. If I could have carried them all, I would have.

Maui is also home to some enormous banyan trees, which the locals bask under in a delightful island fashion. It was fantastic to be on land after what I can only describe as a long, long, long five days! I was amazed that the cashed-up bogans (CUBs) and cashed-up Baby Boomers (CUBBs) went into a shopping frenzy on the islands near Australia, buying cheap tack they could have purchased in Australia at half the price! Hello, have they not seen the price of Hawaiian shirts in Lowes. I’m sure they were just stocking up for their next garage sale!

The following day we arrived in Hawaii’s capital, Honolulu. I almost skateboarded down the gang plank with my two wheelie bags. It was on to the airport bus … where we stayed for an hour!

The airport at Honolulu was almost entirely automated. I noted hardly any staff. Most of the Australians appeared to be having difficulty getting their passports read by the machine, so we joined a queue of shame-people who were ‘too thick’ to use the comprised check-in. It gets worse …

The body search was a little too intimate for my liking. I have metal in my knees! They go ‘bing’ at security check-ins. Finally I was through, but there was a five-hour wait. ‘That’s cool,’ I thought. ‘I’ll get on my iPad’. Wrong! There was no free Wi-Fi at McDonalds or Starbucks, or anywhere in the Honolulu Airport for that matter!

I capitulated and purchased some Wi-Fi time. What a big mistake. It gobbled up my identification, took my money and gave me nothing in return, especially not the Wi-Fi I was hoping for! There was no one to help, no one to complain to … A major panic attack was setting in. No Wi-Fi and no credit card. This was not good travelling solo.

I ran from one disinterested airport worker to the next, then after a major cry and tantrum, I got through to the head of security. “No ma’am, there ain’t no one to help you. It’s Saturday.” There was more crying from me at this news, and stamping of the feet.

“Stay there ma’am and I will come over.”

Thirty minutes later this huge (and I mean huge!) security van pulls up and out pops the head of security brandishing his leather boots and a gun. He lends me his mobile phone. I am really starting to cry. I ring the didgy Wi-Fi suppliers and they promise to delete my details. I mention the head of security’s name repeatedly just to get the message across that they shouldn’t mess with my credit card.

Then I sat sullenly for the remaining hours, until I boarded the Hawaiian Air Flight. One on the plane, I used my credit card details to purchase and watch a movie. I prefer to use cash, but I was being forced to use my card.

When I arrived in San Francisco, California I received an urgent message that my email account has been tampered with in Honolulu and my account was closed as a precaution. All of this seems to have arisen from my trying to use Wi-Fi in Honolulu. It’s the small hassles that can become major events when travelling alone!

Have you had any trouble while travelling alone? Do you feel safer travelling in a group or with another person?

Been travelling? We want to publish your travel stories. Simply sign up as a contributor and submit your stories. When your story is published, you’ll go into the draw to win some great weekly prizes. You can also join the Travel at 60 Travel Lovers Club on Facebook to talk to other travellers in the Travel at 60 community.