‘Every cloud has a silver lining: Hurricane Florence improved our US holiday’ 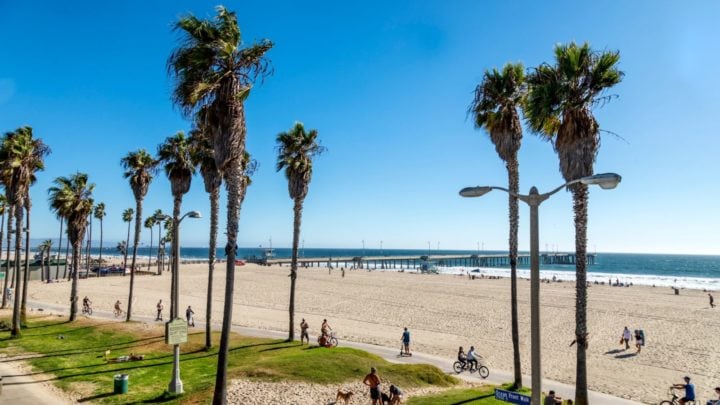 Every cloud has a silver lining, so they say and apparently so too do hurricanes as we were about to discover. We were enjoying the last week of our east coast United States holiday in North Carolina visiting my daughter when the news came that Hurricane Florence was bearing down upon the ‘Carolinas’. Not to worry we thought. Greensboro is a long way from the coast, so we’ll be fine. After all, we didn’t want to cut our holiday short. Greensboro and North Carolina are wonderful places to visit in September.

Then, out of the blue on the Monday prior to our scheduled flight home, we received a call from United Airlines asking us if we wanted to change our travel plans within the US at no cost? We were scheduled to fly Greensboro to Los Angeles on the Friday, with only a 1.5-hour stopover before flying home to Australia.

The helpful customer service agent advised we could take another route or bring forward our internal US flights, but that we could not change the LA to Australia flight. What to do? What would our travel insurance cover if we didn’t take this option and got stuck in a known hurricane? We needed to think about this.

“We’ll call you back shortly,” we said to the United Airlines agent.

Over the dinner table, we convened an urgent family conference.

“You should go a day earlier and have a day in LA,” said my daughter. “If the hurricane hits here we will be fine, but the smaller airports, like Piedmont, get closed first, because they have to reschedule all flights via the internal hubs like Dallas and Washington. You might be stuck here for days.”

Now getting ‘stuck’ in Greensboro for a few more days sounded wonderful, but missing our flight home from LA and then having to re-book a new flight did not sound appealing at all. Reluctantly we agreed to depart a day earlier and made the necessary arrangements with the airline. We felt like we were abandoning my daughter and her partner to face the hurricane alone, but they reassured us all would be fine and that we should not worry.

What to do with an unscheduled 24 hours in LA? I had only been there once in 2006 and I recalled that the place is huge. We decided we did not want to be too far from the airport as we had a 9am departure on Sunday. We also wanted to be on the beach, so we settled on Venice Beach and Santa Monica.

Not having a lot of cash to splash at the end of our holiday, we booked at the very reasonably priced, Venice on the Beach hotel. Our room was clean and comfortable and indeed right on the beach. You know you are in California when you wake to see out your window a bikini-clad girl rollerblading along the boardwalk!

The beach at Venice is vast. A broad gently sloping swathe of the finest white sand you can imagine. The weather was magical with clear blue skies, a light breeze, a gentle swell on the water and about 27C (81F). It seemed perfect until we entered the water. To we soft Queenslanders it seemed like It was freezing! It didn’t matter as there are lots of other things to explore at Venice Beach including funky cafes, street artists and the Venetian styled facades of buildings along Windward Avenue.

Stopping at Venice Beach also afforded us the opportunity to catch up with a former colleague, Sam Trude, who relocated to the US 10 years ago. Sam and his Australian business partner, Sam Cooper, founded, own and operate Great White café right in the heart of Venice Beach practically underneath the iconic hanging ‘Venice’ sign.

Great White is the two Sam’s take on the quintessential coastal Californian restaurant, with a balanced, sophisticated menu and beautifully organic interior which the partners designed themselves. It’s been operating since 2017 and was packed when we arrived. They even serve Vittoria coffee from Australia and you can get a real flat white or cappuccino, which is a rare treat in the US.

Now in their third year, these young entrepreneurs from Sydney are really kicking goals and have recently opened a second restaurant, Gran Blanco also in Venice. If you are in Venice Beach do check them out. Whilst catching up on the years since we worked together, Sam suggested we should visit the remaining Venice Canals, which are only a few blocks from his café.

Venice, California was a town built in 1904–05 to resemble Venice, Italy with its network of canals, business district buildings constructed in Venetian architectural style, and two huge amusement piers. Post-World War I the age of the automobile dawned and demand for road space meant that nearly all of Venice’s canals were filled and converted to roads. Fortunately, a few residential canals were saved by the Great Depression when funding and demand for more road space dried up.

You can walk around these canals and there are several footbridges that enhance a peaceful atmosphere just one block from the busy traffic of Pacific Avenue. The canal atmosphere is definitely laid-back Californian with neat bungalows fronting the placid canal. A myriad small watercraft adorns the canals including canoes, dinghies and some peculiar vessels. A flamingo and a raft complete with barbecue and icebox drifted aimlessly along the canals. What a shame that there are only a few canals left.

Los Angeles is huge and we didn’t have a car, so we decided to get aboard the hop-on, hop-off tourist bus and venture into downtown LA, Beverly Hills and back to Santa Monica. We find these tour buses with their running commentary and the ability to get on and off at designated stops a great way to become familiar with a new city in a short time. After lunch at one of the many fine restaurants on Ocean Avenue overlooking the Pacific Ocean, we decided to explore Santa Monica Pier.

Santa Monica Pier is the culmination of the famous Route 66 but is also a fairground full of exotic performers, the weird and the wonderful. Buskers of every variety abound and even includes a singing Donald Trump. There are many restaurants on the pier as well as amusement parlours and adventure rides. It’s also just a great place to promenade with an ice cream and soak up the west coast ambience. There are still places on the lower section of the pier where locals dangle a line and fish.

The Pier is very popular with locals and tourists alike, but it was not always so. The Pier was originally constructed in 1909 as a means of supporting a sewerage outfall drain. Fortunately, the practice of discharging treated sewerage ceased in the early-1920s.

From mid-1916 there has always been an amusement precinct associated with Santa Monica Pier. In 1983 a series of fierce winter storms destroyed nearly a third of the pier and its future looked bleak. Due to overwhelming community support the pier was reconstructed between 1987 and 1990 to become the wonderful experience that we enjoyed when Hurricane Florence changed our US holiday plans.

Oh, and if you are wondering, Hurricane Florence spared Greensboro, North Carolina, although the airport was closed, so we made the right decision and enjoyed a wonderful 24 hours in Venice Beach. So, it’s true — every cloud (and hurricane) does have a silver lining.

Has a natural disaster changed your travel plans? Have you been to Venice Beach or Los Angeles in the United States?