‘Wild horses couldn’t keep me away… Tame ones could’ 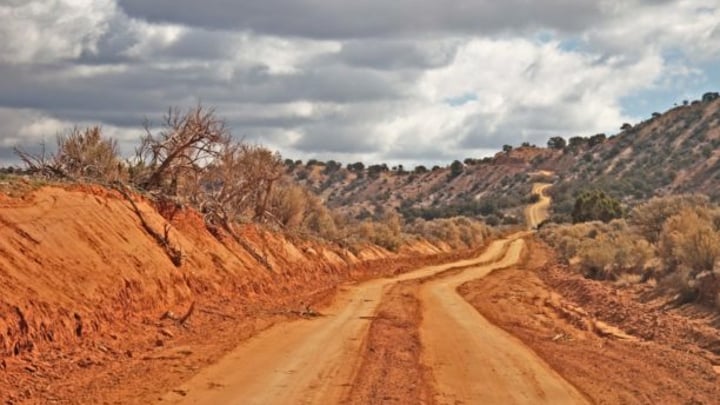 At Kodachrome Basin State Park the day before I’d espied a car. Nothing unusual in that except that it had transgressed past a ‘Road Closed’ sign, down a road that was on my list — Cottonwood Canyon Road. Somehow that vision wouldn’t let me alone. What was I doing tomorrow? Would I give it a go? I went sleep and woke up with it on my mind. Adventure is the playground of the curious, I had to at least try this scenic dirt road in Kane County, Utah, United States. Desperately one hoped that a deep penetration into the unknown would be possible.

It was obvious why wet weather would cause a problem here, the soil would become instant slush. However, no sooner had the transgression taken place than a pick-up truck with a horse trailer came past, giving me a friendly wave. Then there was another and then just a pick-up truck. Not much further on I pulled over to let another pass. How bad could it be?

About 5 kilometres in a streamlet crossed the road, which necessitated slowing down and it seemed that it might be a problem later on. What happened with occasional frequency was that there was a dried out cross gutter or a parallel one right in the middle of the road. They were the reasons for the signs but, if you pottered along at around 30km/h, it was fine and the surface was so smooth compared to Australian dirt roads.

It was an odd scenic journey, memorable in every way. At the top of the first, and also the longest, climb was a panoramic view looking back over the Grand Escalante Staircase National Monument, originally 7,610 square-kilometres but since reduced by recent presidential decree of the incumbent person who I won’t dignify by mentioning.

Then it plunged into the unknown. Sometimes you’d wonder if that was as good as it got and then you’d drive over a crest and amazing things would pop into view. I’ve never been anywhere with such variety of colours in the rocks. There was rust red, sulphur yellow, bleached white, coal black and a few others.

The first major point of interest is Grosvenor Arch. To be honest, it wasn’t one I’d taken a lot of notice of but, when I arrived, I could see why it rated and was pleased to have done the one mile diversion to see it. There are two massive outcrops of irregular coloured sandstone, one of which has two arches in it. The stop also had a toilet, the only one on the entire route, and it came at a time when I needed it.

The further the meander continued, the more interesting it got. At times unattainable horizons were awash with hues, then they were right next to you in all manner of abstract shapes, with the occasional weather-resistant spire jutting up, standing defiantly against the elements. Elsewhere, uplifted geological layers displayed distinct strata lines of varying colours and rivulet patterns streaked some layers, particularly the soft red and off white ones. I figured I must be in what the local ranchers call ‘Candyland’.

Then there was Cottonwood Canyon itself, which I deigned to wander down for a quarter of an hour or so beneath its towering walls, running parallel to the highway but obscured by the towering cliffs. You could see this would be a dangerous place in times of precipitation, water roaring through the limited space would be frightening but today was clearly not one of those.

Back in the car I moved on, rolling down the road and over a small hill where I was shocked to see a washaway that had taken three quarters of the width away with a narrow slot. Vehicles had widened the road and I followed their tracks but I took it as an omen to curtail my exploring and, after about another mile or two, I turned around and headed for base. It had been a fascinating day that had one last twist.

Nearly reaching the tar I got caught in a cow jam. Ranchers were herding cows along the road and four pickups were waiting for them to move. It was the real thing and I revelled in it as a young rider wheeled his horse across my bow. There were about eight riders and around 50 head; this was life on the ranch and for just a short time I felt a part of it. Sadly, it only lasted about 5 minutes and they were gone off to the side and the traffic rolled through.

What scenic journeys have you been on and enjoyed? Have there ever been any hair-raising moments while you’ve been travelling?

Keen to share your travels with other 60-pluses? You can sign up as a contributor and submit your stories to Starts at 60. While you’re at it, why not join the Starts at 60 Bloggers Club on Facebook here to talk to other writers in the Starts at 60 community and learn more about how to write for Starts at 60. Community blogs published on the website go into the draw for some great weekly prizes.