‘Visiting the charming Cotswolds hotspot made famous by Father Brown’ 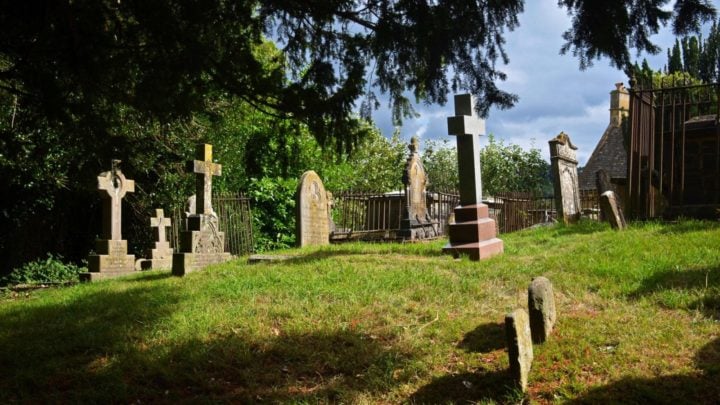 The cemetery located outside the church and vicarage at Blockely, UK. Source: Ian Smith

The day started as we headed out to Broadway, a slightly less famous version of its cousin overseas, but well known around Cotswold parts as a place for connoisseurs, both of fine art and food, and those enchanting thatched houses, whose stonework is sometime highlighted by immaculately trimmed vines clinging desperately to the ancient sandstone walls. Browsing some galleries with prices heading towards a quarter of a million before we ate left us quite sated in the art department. There is quality and variety to behold in every establishment in this part of the United Kingdom and it’s all set on relatively dead flat ground, which is part of the reason they bring busloads of older folk here from time to time, because walking is so easy and there’s a lot of ways to spend your money, should you be so inclined.

We were admiring a garden in the common situated in a laneway just behind the shops with bays of trimmed boxwood hedges and manicured plots in front of houses when we chanced upon the gardener who was the designer, with his tattooed arms and warm smile, who was then waylaid by Lorraine and they both enjoyed a botanical chat. It adds so much when you meet the creator of works of art while you’re admiring them.

Back on the main drag I espied a lovely lane across the fields so, after cruising the extremities of the main street, we turned off and headed further west where, indeed, there were some insanely picturesque clumps of thatchery in otherwise tree-lined streets that beckoned our cameras. The word ‘gorgeous’ seemed totally inadequate for these chocolate box top homes, though a monster tractor towing a trailer along the tar momentarily contrasted adversely with the surrounds.

From there we pointed roughly in the direction of south, looking for an obscure village that I’d read about the night before in an interesting book on local towns. Sadly, our GPS didn’t seem to like the destination so we blundered on until we chanced upon Burford which, despite its steep main street, had a bustle about it that indicated it was, indeed, popular. Parking was at a premium and we just managed to get a spot at nearly the extremity of the hill, meaning a tiring walk back.

The authentic nature of the architecture meant that you had little time to reflect on physical discomfort, rubber-necking instead took priority as you peered into the shops, some containing the sort of stuff you’d never buy but was nonetheless interesting. There were lots of quirky signs around as well, one of my favourites being the motto under the Three French Hens Café, which stated “I dream of a better world where chickens can cross the road without having their motives questioned”.

Not all lines on the buildings were straight either and most showed signs of repair or rebuild that somehow seemed to add to their allure. The one that most garnered my attention was a small dormer window atop two stories and its right side was lower than its left by about the thickness of two bricks with the glass sloping oddly.

At the lower end of town was the church, a typical English sandstone model replete with accompanying gravestones scattered seemingly randomly around the grounds with mature trees and it all reeked of history, though nothing more so than the plaque to the three ‘Levellers’ who were executed on the order of Oliver Cromwell when all they sought were better conditions and pay for the soldiers who had fought for him in the ‘New Model Army’. Despite assurances from Cromwell himself that no physical harm would come to any of the Levellers, he did a night raid to disperse the group of about 400 and chased the rest. Most escaped, but these three were made an example of and, to this day, there’s a memorial service held in honour of their sacrifice on the Saturday nearest May 15. The plaque only dates to 1979 however.

Among the other grave stones were some crosses in the Celtic style while lichen and moss covered much of the rest to the point of being unreadable. Beside the church ran a gurgling brook where ducks happily lived, the moving water proving to be a real treat apparently, but that’s where our downside ended; now it was up all the way past the Tudor style half-timbered houses, so named because the oak was so strong and durable they cut it in half, whereas in some other European countries they had to use the whole log.

We managed to chill out at one of many cafes on the way back, which gave us some blessed relief. Burford, a town I’d never wanted to see but was now pleased I had.

We’d gone a bit further than originally planned so we headed back to Snugborough Mill after a pleasing day. However, when we got home I decided I’d like to go and see the church, since we’d done little around Blockley and, let’s face it, there was only little to do. The village, like all in the Cotswolds, was based on the fabric boom, but silk was the main thing here until its collapse in the early 1900s. Where we stayed, at Snugborough Mill, was turned into hydroelectric power plant until the late 1930s.

I’d only just seen the tower of the church and had no reason to visit it other than to get a couple of snaps. In keeping with every rural church I imagined there would be some history there. I had no idea it would be modern day history for it is here, at this very church and surrounds, that the bulk of the well-known series Father Brown is filmed, though the church actually dates back to 1180. The village is mostly 16th and 17th centuries however, and there’s a sundial on the side of the church dedicated to a church warden dated 1650, which backs those dates up.

Recorded history goes back much further though; Burhred, King of the Mercians, granted a monastery at Blockley in 855 to Aelhun, Bishop of Worcester, who paid 300 solidi of silver for it. Liberties of an archaic kind were granted with the estate to the bishop. Still, I’m just here for a few snaps but it’s amazing what you can find out. Thus came to an end our time at Snugborough Mill, four days of mostly pure joy.

Have you ever visited a destination made famous by television? Tell us about it.