Iconic locations to visit if you love Australian history 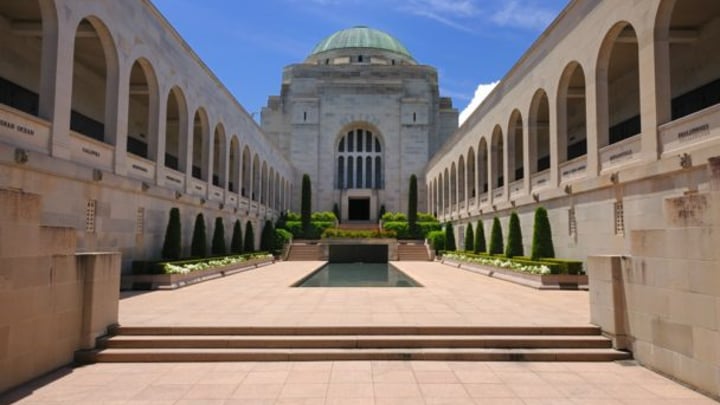 There are many military museums and preserved historic sites scattered around the country, including the Australian War Memorial in Canberra. Source: Getty

Australia is a country rich in history, from the landing of the first fleet in 1788 and the establishment of penal colonies across to country to Australia’s campaigns in World War 1 and 2.

There’s no shortage of historic sites to explore. So why not take a trip back in time and visit some of the country’s most iconic locations?

If you love military history, the Northern Territory is worth a visit. There are many sites of military heritage throughout the state including the Anzac Hill Memorial in Alice Springs, dedicated to those who lost their lives in WWI, and the Katherine Museum, that holds an eclectic collection of memorabilia from World War II. Darwin played a significant role in Australia’s military history and is home to the Darwin Military Museum, which is is dedicated to sharing the story of the bombing of Darwin during WWII, which to this day, remains the largest single attack ever mounted by a foreign power on Australia.

Many coastal locations in Western Australia, such as Rottnest Island, Fremantle, Albany and Broome, are steeped in military history. In fact, King George Sound in Albany is where the fleet taking the first Australian and New Zealand soldiers departed for the battlegrounds of WWI.

Meanwhile, Western Australia’s convict era has left behind a variety of historic sites including Fremantle Prison, which was originally constructed in 1851 by convicts that were transported to Australia from the UK. Today it remains as a world heritage listed building and is used for several purposes such as an art gallery, museum and a conference centre.

If you have a strong interest in military history a drive along the famed Great Ocean Road is a must. Known as one of the best road trips in the world, the Great Ocean Road winds through 300 kilometres of stunning Victorian coastline. It was built by servicemen in 1932 as a memorial to those who served during World War I. An arch was created in 1939 but was destroyed during a bushfire. It’s since been replaced and plaques have been erected to commemorate the arch and the people who were responsible for creating the road.

Tasmania is the perfect place to learn about Australia’s convict past — in fact, several UNESCO World Heritage-listed convict sites are found in Tasmania, including the Port Arthur Historic Site, which is Australia’s most famous penal settlement. From 1830 until its closure in 1877 it held about 12,500 convicts and the 30-plus buildings and ruins that remain, including the prison, hospital, insane asylum and the church, are a chilling reminder of the past.

Other convict sites include the Coal Mines Historic Site, a convict probation station situated on the Tasman Peninsula, Cascades Female Factory, a former workhouse for female convicts in Hobart, and Brickendon Convict Village which is based in Tasmania’s north.

When WWII broke out, Queensland became an important base for American forces. Following the Japanese bombing of Pearl Harbour in Hawaii on December 7, 1941, the United States entered the war and deployed soldiers across the world to take part in battles and security operations. At the peak of the war nearly 150,000 American soldiers were located in Queensland and their influence quickly seeped into Aussie life. Cafes started selling Coca-Cola, American fashion and cinema became hugely popular and by 1944 two-thirds of Australia’s imports were from the US.

This famed military partnership between Australia and the US is on display at the MacArthur Museum in Brisbane, with exhibits on the role the city played in WWII and its relationship with US forces. There are many other military sites around the city including the Victoria Barracks, which contains a large collection of replica and service medals covering the Australian army’s involvement in the Boer War, World War I and World War II.

Several UNESCO World Heritage-listed convict sites are found in New South Wales, including Old Government House, which is the oldest surviving public building in Australia and contains a major collection of Australian colonial furniture. Elsewhere, the Hyde Park Barracks offer a unique insight into the housing provided for convicts working in government employment around Sydney from 1819 until its closure in 1848.

Discover Australia’s involvement in World War I and World War II, and take some time to remember our servicemen and servicewomen at the Australian War Memorial, in Canberra. The memorial displays a wide-ranging selection of artefacts, photos and stories covering both wars and is a must-visit for those with a keen interest in Australia’s military past. At the centre of the memorial, you’ll find a long series of bronze panels, named the Roll of Honour, containing the names of more than 100,000 members of the Australian armed forces who lost their lives in the service of the country.

If you’re planning to visit South Australia, a trip to the Army Museum of South Australia is quite the experience. It’s the only military museum in the state and proudly showcases a range of army equipment, artefacts and realistic displays of historical campaigns. And if you’re one for motor vehicles, outside the museum is an impressive display of vehicles including a WWII M3 tank and a Rapier missile system once deployed at Woodside in Adelaide Hills.

Have you been to any of these places before?