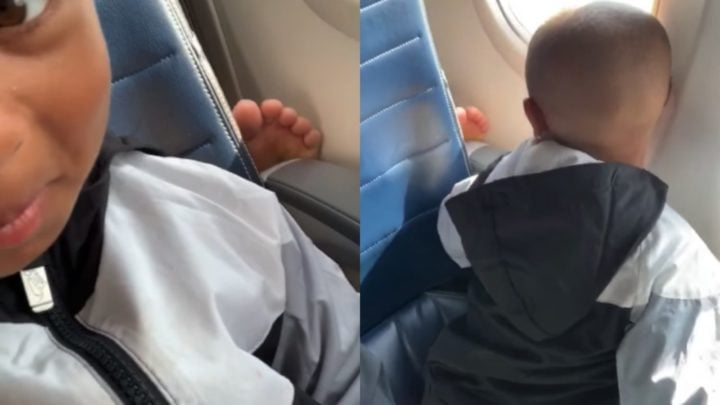 Rodney Small was travelling with his dad Daryl when his armrest was partially invaded. Source: Facebook - Darryl Small

A video of a four-year-old boy telling off a woman for putting her “stinky feet” on his armrest during a flight has gone viral.

Rodney Small was travelling with his dad Daryl, who captured the incident on camera, when his armrest was partially invaded by a fellow passenger.

In a video, which has since gone viral on social media after being shared on his dad’s Facebook page, the toddler can be seen smirking, before exclaiming: “There are stinky feet behind me.”

The video has since been viewed over 96,000 times on Facebook, with other social media users congratulating the boy.

“Good Job young man! Always stand up for yourself,” one user wrote.

Another added: “It’s good to learn at an early age to stand up for himself. He’s got quite a feisty personality. Love this.”

And a third wrote: “Good for him!! That’s gross. That lady should be ashamed.”

Meanwhile, the toddler’s dad told Unilad: “As a child he knew that putting your foot in someone else’s space was not kind at all. Sometimes adults hold back with confronting others to keep the peace but as a child he voiced his concerns and his facial expressions and reaction made it hilarious.”

What are your thoughts on this? Do you find this funny?