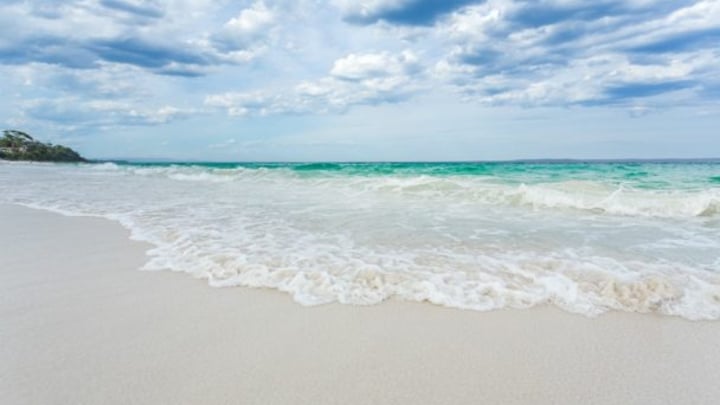 A travel site has poured a bucket of cold – salt – water over one of Australia’s most popular beaches, telling readers that Hyams Beach in New South Wales is not, in fact, one of the world’s best white-sand beaches.

Hyams Beach, near retiree-hotspot Jervis Bay on the state’s south coast, is inundated with visitors every summer as tourists flock to the beautiful area to experience the famous beach’s pure white sands.

Hyams Beach has been long called Australia’s, and even the world’s, whitest beach. A Google search for ‘Australia’s whitest sand beach’ brings up multiple stories about Hyams Beach, including one from Channel 9 that says the beach’s claims to white-sand fame started back in 2005 when Australia’s National Committee on Soil and Terrain first started trying to identify Australia’s whitest beaches – admittedly, as a bit of a joke – and received many nominations for Hyams Beach. (The committee actually later found that, in fact, Lucky Bay in Cape Le Grand National Park in Western Australia was whiter and Hyams Beach came in fourth in the national rankings.)

But that didn’t stop plenty of people continuing to insist that Hyams Beach has the whitest sand in the nation – even as recently as a 2018 article on traveller.com.au, that referenced the beach’s Guinness World Record for the whitest sand.

But now traveller.com.au has taken a different tack, pointing out that, in fact, there is no Guinness World Record for the whitest sand. “Sure, it’s white – whiter than the sand at Bondi and St Kilda. But it’s not the world’s whitest – Hyams Beach is not even home to Australia’s whitest sand,” the site’s Sumeyya Ilanbey writes.

However, the people who live in the area might not be too disappointed if the truth gets out, as many of the retirees who live in Jervis Bay year-round complain about the influx of visitors that flood the area’s beauty spots each summer.

Meanwhile, the hunt for even whiter sands than those see at WA’s Lucky Bay continues. Noel Schoknecht, the researcher who started the debate 13 years ago when he was chairman of the National Committee on Soil and Terrain, wrote in The Conversation in 2017 that there were still many beaches in Australia that he hadn’t yet investigated – Shelburne Bay in north Queensland was one he picked out as a likely contender that had at the time not had its sands sampled,

“I’m sure there are more wonderful beaches out there that we haven’t sampled which may defeat Lucky Bay,” Schoknecht wrote. Just don’t tell anyone who visited Hyams Beach specifically so they could say they’d experienced the world’s whitest sand!

Have you been to Hyams Beach? Did the sand seem spectacularly white to you?