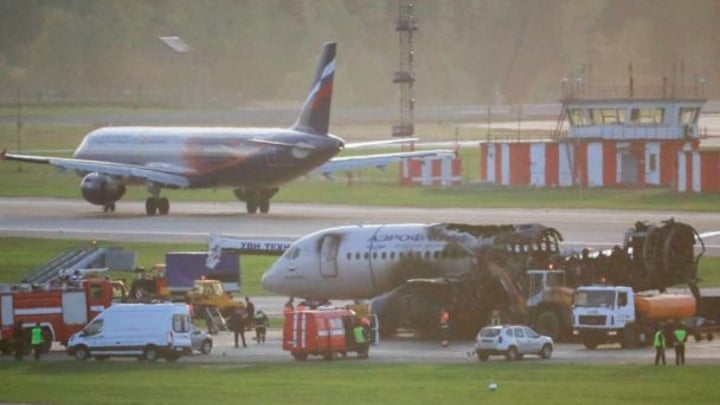 On Sunday, an Aeroflot Superjet 100, was in the air for just 28 minutes before making an emergency landing at Moscow's Sheremetyevo International Airport, where it then crash-landed and caught fire. Source: Getty

A survivor of the deadly plane crash in Russia that killed 41 of 78 people has criticised fellow passengers, accusing them of pausing to grab their suitcases before carrying them off as the plane was urgently evacuated.

On Sunday an Aeroflot Superjet 100, which was flying from Moscow to Murmansk, was in the air for just 28 minutes before making an emergency landing at Moscow’s Sheremetyevo International Airport, where it eventually crash-landed and caught fire. Passengers and crew members who survived said the aircraft was struck by lighting moments before, the BBC reports.

Now, survivor Mikhail Savchenko has expressed disbelief at passengers who allegedly grabbed their luggage during the scramble in an emotional Facebook post.

“I don’t know what to say about the people who ran out with bags. God is their judge,” he wrote in the translated post.

“But I really want to ask them not to persecute them, I am sure that it is very hard for them now. I do not think that at least one person in this burning hell coolly and deliberately dragged suitcases… I don’t know how the psyche works in such situations, the question to the experts.”

Savchenko also shared a video to his Facebook page, which prompted a slew of comments, appearing to show people carrying their luggage as the plane burned behind them.

“Everybody would have made it out had it not been for those passengers grabbing their bags. It’s a shame to think so selfish!!” one commentator wrote.

Another added: “Having trouble with those walking away with their luggage while people were dying behind them. Shame on them!”