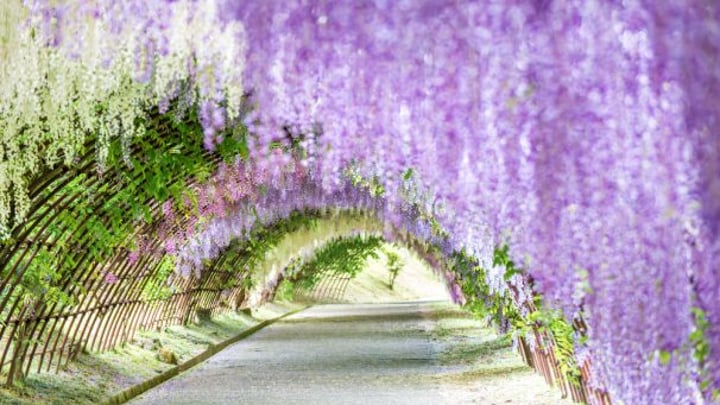 Magical, surreal, unforgettable, exquisitely beautiful. The list of superlatives is long when it comes to Japan’s incredible wisteria gardens.

Looking like something out of a fairytale, the wisteria plants bloom for a few gorgeous weeks every spring, creating a floral extravaganza that every garden-lover should experience at least once.

Beloved for its sweet fragrance and pretty colours, wisteria has been adored by the Japanese since the 8th century – and no wonder. The blossoms can grow up to about a metre, cascading down in long strings to create a vision in pastels.

One of the best places to view wisteria in Japan is the Ashikaga Flower Park in Tochigi, a Japanese prefecture about 90-minutes’ drive north of Tokyo. Loads of different flowers means it’s a riot of colours all year-round, but the wisteria takes centre stage from mid-April to mid-May.

There are more than 350 wisteria plants (they look like trees, but are actually vines), including an 80 metre-long tunnel of white flowers and (according to the website), “The most beautiful great wisteria in the world”. The title of largest wisteria vine in the world may go to a plant in Sierra Madre, California (it’s around 4,000 square metres in size), but Ashikaga’s is still enormous (1,990 square metres), very old (it dates back to 1870) and exquisitely beautiful. Its heavy vines are supported by steel poles, so you can walk underneath the canopy and feel like you’re underneath a waterfall of wisteria. The effect at night-time is just as spectacular.

The Ashikaga Flower Park hosts The Great Wisteria Festival every year – dates for 2019 are estimated to be around April 13 to May 19. Some species of wisteria feature edible flowers and roots, and apparently the on-site cafe actually sells wisteria-flavoured ice cream, biscuits and noodles – if anyone’s tried and of these, please get in touch and let us know what they taste like!

The other place that’s beloved by wisteria fans is the Kawachi Fuji Garden in Kitakyushu on the island of Kyushu in southwest Japan. It’s just over an hour by car from Fukuoka, or about five hours on a train from Tokyo.

The private garden spans roughly 10,000 square metres, and is home to 150 individual wisteria vines in 22 different types of blossoms, ranging from purple, blue and violet to pink and white. The glorious flowers completely cover two spectacular tunnels (one’s around 80 metres, the other an epic 220 metres), creating the most picturesque, pastel-hued walkways imaginable.

The private garden is open to the public during the wisteria season in spring and the maple leaf season in autumn (just remember Japan’s seasons are the reverse of Australia’s). Late April and mid-May are again the best times to visit to see the wisteria tunnels in full bloom – estimated 2019 dates for the annual Fuji Matsuri (a.k.a ‘Wisteria Festival’) are April 27 to May 14. But be sure to book tickets in advance – the gardens are so popular, you might miss out otherwise! Also be aware that the gardens are located on the side of a hill and if you’re using local transport it can be a bit of an effort to get there. Taking an Uber or hiring a car is a blooming great idea.

Would you travel to Japan to see the wisteria?