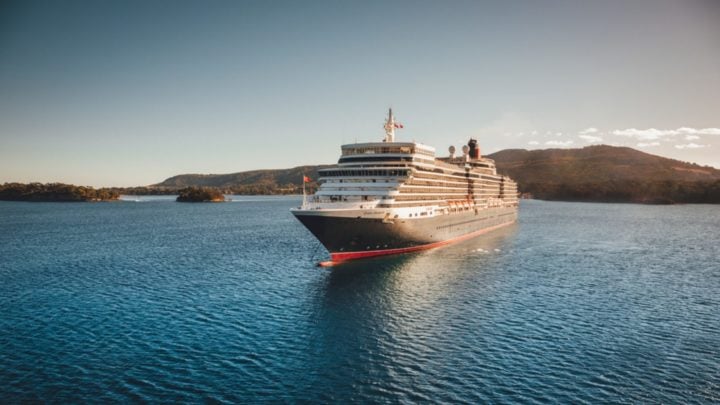 See Eden, Port Arthur and Hobart on the popular Queen Elizabeth for less than $100 a night per person twin-share. Source: Cunard

If you believe adventures begin in your own backyard, there’s a bright light amid all the worry that coronavirus has caused cruise fans.

The cancellation of hundreds of Asia-routed cruises while authorities in the region battle the virus means that the world’s biggest and best cruise companies are redirecting their ships to Australia to add extra voyages on some of best-loved Australian and New Zealand itineraries.

And because the cruise companies need to fill these ships at short notice, with sailings departing as soon as March, cabin prices are at unbelievable lows, Wendy Harch, chief commercial officer of Travel at 60, says.

“Everyone’s no doubt read about the cruises that cruise lines have had to cancel in Asia due to the coronavirus outbreak, but what they might not have heard is that instead of leaving their ships empty and sitting in a port, some cruise lines are sending them south to Australia to do extra Aussie and New Zealand routes,” Harch explains. “The cruise lines want to fill those ships and fast! That means they’re slashing the prices on some of the most popular routes.”

But Harch advises keen cruisers to get in quickly if they want to secure a berth, because paying less than $100 a night for three meals per day, plus a traditional afternoon tea every day, evening entertainment and gala balls, all amid the elegance that Cunard’s Queen Elizabeth offers is just too cheap for most cruise fans to resist. (The circumnavigation of Australia cruise on the QE sold out in a single day!)

“These rock-bottom prices won’t last long, because this isn’t a normal event – in more than 20 years in the travel industry, I’ve never seen the re-routing of so many ships at once – so it’s safest to assume that when these cabins are gone, they’re gone and there won’t be another offer,” she says.

Princess Cruises, another huge favourite of the Travel at 60 community, is the latest to offer incredible deals on Aussie and NZ routes, with its popular Round Australia itinerary going on sale on February 26 from $3,599 per person twin-share for 30 nights, with too many inclusions to list, including deck parties, movies under the stars and a champagne reception with the captain. A premier beverage package and free wif-fi is even being thrown in on some fares.

Princess will be sending the Sapphire Princess to so many iconic Australian destinations, including the Kimberley Coast, Kangaroo Island and Port Lincoln. And while this particular offer is on a Sydney departure, Adelaide and Perth departures are expected to be announced soon.

Pre-registration is already open on the Round Australia itinerary, plus Princess’s Northern Explorer from Sydney to Fremantle or vice versa, which is available at $1,299 per person twin-share for 17 nights.

Travel at 60 already has an array of these special cruise deals available or open for pre-registration, and Harch says it’s possible more cruise companies will add extra voyages in Australia and New Zealand in the coming weeks as they assess the ongoing impact of the coronavirus on their other routes.

“But that’s not guaranteed,” she cautions.” And the itineraries we do have are selling super-fast so I’d recommend getting in now if you don’t want to miss out.”