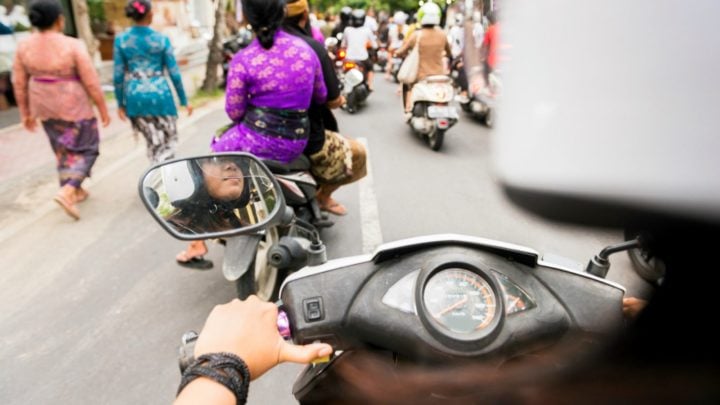 Motorbike accidents are a leading cause of tourist deaths on the popular Indonesian Island. Source: Getty

Riding a scooter or motorbike might seem like a fun, harmless way to explore Bali, but it can end disastrously.

Last week, we learned the tragic news of an Australian man’s death. The 59-year-old, identified as Peter Robinson, was killed after he lost control of his scooter and slid under a passing truck just before 5pm on Friday, news.com.au reported. The man suffered fatal head injuries and died at the scene.

A Department of Foreign Affairs and Trade (DFAT) spokesperson told Travel at 60 they are providing assistance to the family of an Australian man who passed away in Indonesia.

The sad news comes less than three months after another Australian man, Frankie Avalon Fonohema, 27, was killed riding a scooter on the popular Indonesian Island.

According to the government’s Smartraveller website, motorcycle accidents involving Australians are very common in Southeast Asia, particularly in areas such as Bali, Thailand and Vietnam.

Smartraveller notes some insurance policies will not cover you if you have an accident using a vehicle you are not licensed to drive.

The website also advices that it’s important Australian travellers wear helmets, and other protective clothing when riding motorcycles, scooters and mopeds overseas in order to minimise the risk of serious injury.

Meanwhile, a DFAT spokesperson previously told Adelaide Now, “the most common reasons for illness or hospitalisation amongst young people who travel to Bali are injuries due to motorbike accidents”.

In fact, information released by DFAT showed that a total of 39 Australians died in Bali from 2011 to 2012.