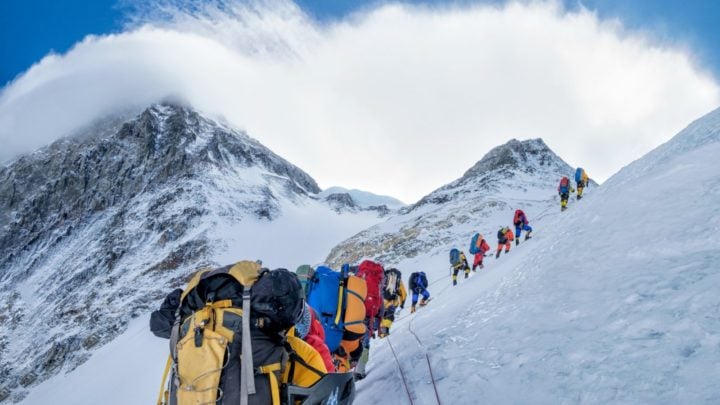 The Australian was found by a four-person mountaineering group on the northern slopes of Mount Everest on Wednesday. Source: Getty

An Australian man is recovering in hospital after he was found unconscious on Mount Everest.

According to China Daily, the Australian was found by a four-person mountaineering group on the northern slopes of Mount Everest on Wednesday, at an altitude of 7,500 metres.

The man, who has not been identified, was initially in a state of physical exhaustion, out of consciousness, and in critical condition, but has since stabilised, the publication reported.

The group then stayed one night with the man before transferring him to a camp at 5,200 metres on Thursday with the help of a yak. He has since been taken to a hospital in Nepal where his condition has reportedly stabilised.

In a statement provided to the Sydney Morning Herald, Australia’s Department of Foreign Affairs and Trade (DFAT) said it was providing consular assistance to an Australian man hospitalised in Kathmandu.

The news comes after at least nine climbers have died on Mount Everest during this year’s climbing season, with many blaming overcrowding for the death toll.

Climbed up to camp 3, 7500m but the jet stream had returned closing the summit after only 2 days so I descended to basecamp. Around 100 climbers did summit in those 2 days with sadly 2 deaths, an Indian man found dead in his tent at camp 4 and an Irish climber lost, assumed fallen, on his descent. A go fund me page has been set up for a rescue bid for the Irish climber but it is a well meaning but futile gesture. Condolences to both their friends and families. Both deaths happened above 8000m in the so called death zone where the majority of deaths of foreign climbers happen. Around 700 more people will be looking to summit from Tuesday the 21st onwards. My revised plan, subject to weather that at the moment looks promising, is to return up the mountain leaving basecamp Tuesday the 21st 0230 and, all being well and a lot of luck, arriving on the summit the morning of Saturday the 25th. I will be climbing with my Sherpa, Jangbu who is third on the all time list with an incredible 19 summits. The other 4 members of our team decided to remain on the mountain and are looking to summit on the 21st. My cough had started to return at altitude so I couldn’t wait with them at altitude for the window to open without the risk of physically deteriorating too much. Furthermore as I had missed due to sickness the earlier camp 3 rotation best practice was for me to descend to allow my body to recover from the new altitude high so I could come back stronger. This was not an easy decision as the 13 hours climbing from basecamp to camp 2 in a day was the hardest physical and mental challenge I had ever done, now I have it all to do again. Finally I am hopeful to avoid the crowds on summit day and it seems like a number of teams are pushing to summit on the 21st. With a single route to the summit delays caused by overcrowding could prove fatal so I am hopeful my decision to go for the 25th will mean fewer people. Unless of course everyone else plays the same waiting game. #everest #everest2019 #lhotseface

Last week, a British man died on his descent after he wrote on social media that he feared the dangers of overcrowding.

Four Indian climbers, two Irish climbers, one American and a Nepali guide are also among the dead.