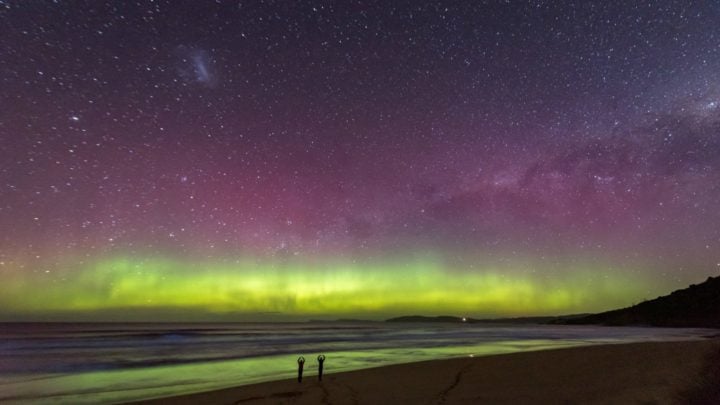 Last night and early into this morning, the Southern Lights lit up skies across Tasmania and in southern Victoria. Source: Getty

Spotting the beautiful Southern Lights is a bucket list item for many people and it usually takes a fair bit of travel planning to make it happen – but some Aussies may now have the chance to enjoy the spectacular colours without moving beyond their backyard.

On Wednesday night and early into Thursday morning, the dancing lights, formally known as the Aurora Australis, lit up skies across Tasmania and in southern Victoria.

The Bureau of Meteorology issued an aurora alert on Wednesday indicating a geomagnetic storm is in progress. A geomagnetic – or solar – storm is a disturbance in Earth’s magnetic field usually caused by a solar wind shock wave.

In this case, the storm is expected to set off solar flares that release electromagnetic matter which helps to create the bright, swaying lights. This can last as long as two days, meaning more colourful lights could be gracing Aussie skies tonight.

A post shared by Luxury Travel Community️ (@luxuryworldtraveler) on Aug 3, 2018 at 6:54pm PDT

“We are currently monitoring two coronal mass ejections (CMEs), which are large clouds of plasma that are ejected from the sun and travel at high speeds through space. They are both relatively slow moving and our model predictions have them passing over us on 15 and 16 May,” Bureau of Meteorology Space Weather expert Dr Zahra Bouya explained.

The lights are, however, notoriously tricky to see — a cloudy night can be enough to prevent people from seeing them, and it requires being away from artificially lit areas and preferably at an elevation such as on a hill.

Meteorologist Philip Landvogt said the best viewing conditions in Tasmania would be tonight, along the east coast, north of Hobart.

“In southern Victoria, cloudy skies are forecast on Wednesday with the best viewing conditions expected on Thursday night when it will be mostly clear with just some isolated fog patches,” he said.

Have you seen the Southern Lights? What was it like?