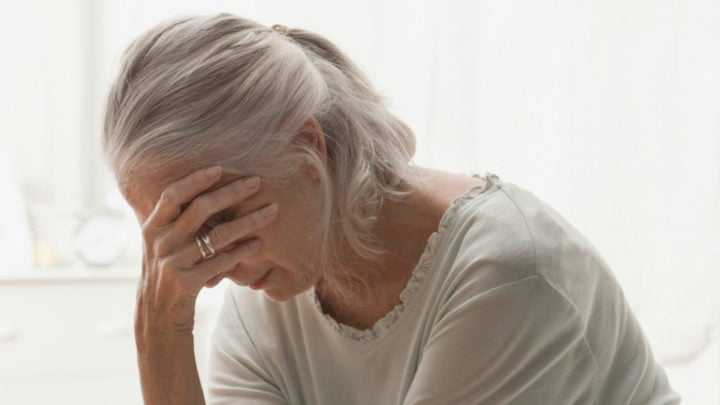 A whopping 70 per cent of Australians say they are anxious about their retirement income. Source: Getty

Senior Australians have admitted to feeling more anxious about retirement than their overseas counterparts, just weeks after the country was ranked third best in the world for its retirement income system. It seems that the Age Pension and superannuation do little to alleviate those nerves when it comes to life after paid employment, with 70 per cent of Australians claiming they have feelings of stress or anxiety towards retirement finances.

The study compiled by investment management company Franklin Templeton found that Americans, Canadians and Chinese citizens experience far fewer nerves about their futures with figures of 67, 68 and 68 per cent respectively.

This suggests that, despite having a world-class compulsory superannuation savings system, Aussies are still not immune from the common anxieties around retirement readiness. Speaking about the results, Manuel Damianakis, head of retail for Franklin Templeton in Australia said this is not so surprising, given the varied numbers thrown at pre-retirees to live a happy and healthy retirement.

“When you consider that there are so many different projections about the amount of money a person will need in retirement, and estimates can differ by millions of dollars, this general malaise about retirement finance is not hard to understand,” he says.

However, interestingly enough the global survey, which was conducted in Australia for the first time in May 2019,  found that it’s actually the younger generations who suffer the brunt of anxiety towards their futures. Despite having years to plan for retirement and budget their expenses, 70 per cent of those classed as Generation Y (21 to 38 years old) and Generation X (39 to 54 years old) say they experience stress or anxiety from thinking about their retirement savings and investments.

This is a rate higher than among Baby Boomers who are much closer to retirement, or perhaps have already retired, with 70 per cent of the older cohort admitting to these feelings.

“Younger Australians are often pessimistic about their capacity for home ownership and it appears they are equally perturbed about financing retirement,” Damianakis says. “It is unfortunate younger Australians are feeling this unease when they have one of the greatest advantages for successful retirement planning on their side – time.”

Funny enough, the hashtag #MillennialRetirementPlans was trending on social media recently with the younger generations sharing their concerns about their futures. The responses were quite hilarious, but also very dark, due to their sheer honesty.

“What plans, we’re never going to be able to retire,” one person wrote. While another said: “Finally earn enough experience to get an entry-level job.” And a third commented: “Move out of the basement when I inherit Mom’s [sic] house.”

But their worries, and those of Baby Boomers already retired, are set to be addressed when the country’s Age Pension and superannuation system is thrown under the microscope in a major sweeping review of Australia’s retirement income system, with a focus on how they support Aussies in retirement as well as how they affect the budget as a whole.

The review, which is the first of its kind in three decades, was initially recommended by the Productivity Commission after a damning analysis of the country’s poorly performing super funds earlier this year. It is focusing on three key pillars, a means-tested Age Pension, compulsory super and voluntary savings, “including home ownership”.

The independent review is being chaired by former senior Treasury official Mike Callaghan, alongside chair of the Self-Managed Super Fund Association Deborah Ralston and Future Fund board member Carolyn Kay. It is the first inquiry into the compulsory superannuation scheme since the 1993 inquiry, led by Vince Fitzgerald, which was carried out a year after former PM Paul Keating’s compulsory savings system was introduced in 1992.

According to Josh Frydenberg and assistant minister for superannuation, Jane Hume, the year-long review is looking at “the impact of current policy settings on public finances”. It is also going to “cover the current state of the system and how it will perform in the future as Australians live longer and the population ages”.

Are you retired? Do you have concerns about your income in retirement?