Packed to the rafters! Aussies ditch aged care in favour of multigenerational living 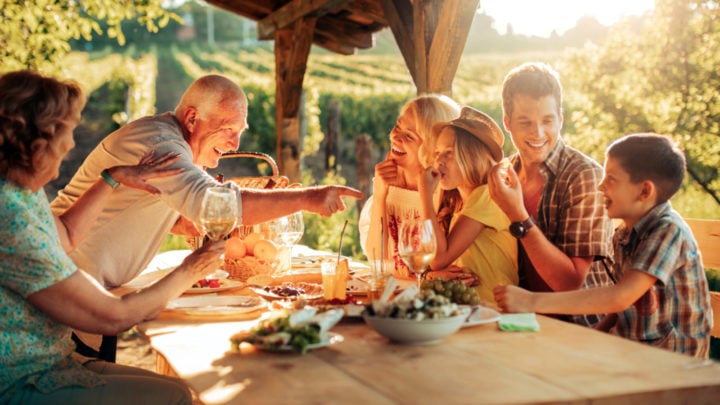 Older Aussies are choosing to move in with their adult kids instead of into an aged care facility. Source: Getty

The trend of kids, parents and grandparents all living under the one roof is continuing to grow, and while finances — or lack thereof — are a driving factor, the desire to age in place is becoming a huge drawcard for Australians as well.

Instead of moving into an aged care home, many Aussies are choosing to grow old surrounded by their family, in what’s called in what’s called a multigenerational household. This style of living sees whole family units working together to support each other in one home.

It’s a lifestyle that’s thought to be more commonplace in other parts of the world, but one that’s quietly emerging in Australia. Research from the UNSW City Futures Research Centre shows one in five Australians live in a multigenerational household, with over-65s highlighted as the fastest-growing age group for this style of living.

According to senior researcher Dr Edgar Liu, this is for two reasons. First, the companionship and support of being close to loved ones, including more time with the grandkids, and secondly, the desire to avoid aged care living for as long as possible.

The Aged Care Royal Commission brought into the spotlight many shocking allegations of abuse and neglect in facilities across Australia, instilling fear into the minds of many who were considering aged care for their later years. It’s also increased the government’s support of in-home care and living, in turn contributing to the rise in multigenerational households.

“There’s an aversion to moving into aged care for obvious reasons we see now, with the Aged Care Royal Commission, and policy-wise, the government doesn’t want people to move into institutions; they want people to live in the general community,” Liu says. “So, more families are considering providing that care and support themselves.”

It’s not just the elderly who are choosing to move in with their children for support in their older years – there’s a growing number of adult children choosing to move back in with their parents as they save for the future. According to a study by the Pew Research Center, 18 to 34-year-olds are much more likely to live with Mum and Dad than independently or with a partner.

However, it’s not to say that living with multiple family members is easy. While having everyone living under the one roof may suit some relatives, for others, it can put further strain on relationships. If it’s a choice that was carefully planned out, it can bring a world of good, but for others who are perhaps forced into the situation for financial reasons, it may not be smooth sailing.

There are common misconceptions in multigenerational households that parents will provide free childcare, or that certain people will take on the caregiving role of elderly family members. However, one of the biggest issues, according to Liu, is the lack of privacy.

He says government and developers aren’t building the type of multigenerational homes people need and so, people are being forced to live in close quarters. But not only that, Aussies are struggling to find the perfect place to set up home, with each generation requiring reasonable access to different jobs and services.

“At the moment, much of the new housing we see are provided as apartments, and they are typically small with 1-2 bedrooms, which is not really suitable to most family arrangements,” Liu says. “So it’s a bigger planning issue around how we have the right mix of housing for people.

Do you live in a multigenerational household? Is it something you'd consider?