Men cared for by their partners more likely to feel like a burden, finds study 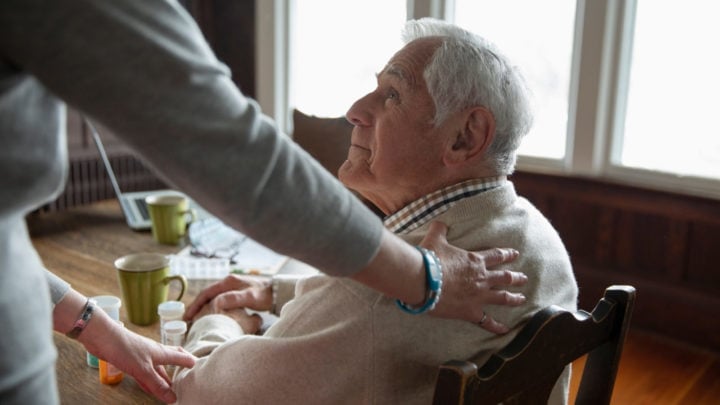 Husbands being cared for by their wives feel like a burden with an increase in depressive symptoms. Source: Getty

Becoming your partner’s primary carer can put a huge strain on your relationship as you watch your loved one slowly deteriorate. But the pain and stress of ageing can also be felt by the spouse who requires care – and a new study has shown one gender in particular displays serious signs of guilt and depression.

While obviously difficult for both males and females, new research published in the Journal of Social and Personal Relationships, found care-receiving husbands feel more burdensome in the relationship, resulting in negative spousal exchanges and poor mental health.

In investigating the relationships of older couples and how they cope with changes in roles and responsibilities, researchers from the University of Michigan and Daegu University came to the conclusion that if a person receives more care than they give, they are likely to feel guilt and shame.

Whereas, when the opposite happens – more is given than received – anger and resentment by the caregiver is a possible outcome.

When compared with husbands who didn’t receive any care or those who provided care to their wives, care-receiving husbands showed more depressive symptoms. According to researchers this may be due to the negative reactions they receive from their spouses.

Alternatively, for caregiving husbands, their role in looking after their partner didn’t affect their mental health. The study’s lead author Minyoung Kwak said this is not surprising given that it’s usually the wife who takes care of their partner throughout their lives.

“Because spousal caregiving is not a traditional role for husbands, caregiving husbands often receive affirmation when doing the work, as well as praise from others,” Kwak said.

Meanwhile, perhaps unsurprisingly, wives didn’t display any significant changes in their mental health while in a caregiving role. Although each household is different, Kwak explained many women are accustomed to caregiving duties in their marriage, so are less susceptible to the adverse effects of negative social exchanges with their husbands.

“Due to wives’ long-standing patterns of providing care in the family throughout the marriages, spousal care may not generate significant differences in exacerbating inequitable relationships among wives,” Kwak said.

However, this is not to suggest that being a caregiver isn’t emotionally exhausting and physically taxing. Dr Apil Gurung from the University of the Sunshine Coast recently spoke to Starts at 60 about the effects on carers. He said the likelihood of developing ‘compassion fatigue’ is common among informal carers who don’t have the formal training and coping mechanisms in place.

“Caring for someone involves a lot of patience, perseverance and hard work,” Dr Gurung said. “It’s not easy being a care giver and one has to look after themselves too as it’s easy to forget about oneself while looking after others.”

Are you the primary carer for your partner? Or are you in the care-receiving role? How has this impacted your mental health?