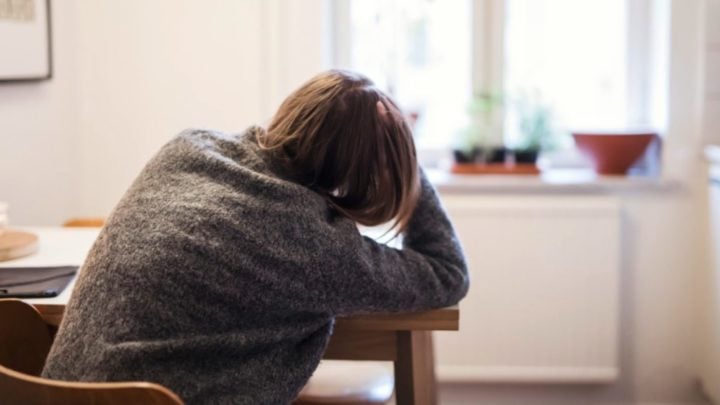 A woman has pleaded for answers after watching her savings gifted away. Source: Getty. (Stock image).

Making a mutual decision over how long to help fund adult children’s lifestyles – especially when they’ve moved out of home – can be a difficult one. But for one woman, it’s made even harder as she’s revealed she’s also helping to fund her own partner too.

Pleading for advice from other parents, the women – who revealed she was in her 60s – wrote to the Guardian’s Relationships column to admit she’s at a loss as to what to do, as her partner of 16 years refuses to discuss their finances.

“My partner of 16 years considers me unreasonable for questioning him over a £100 (AU $183) gift to his son from our joint account. The money was to get his son’s pension started and is the latest in a long line of financial contributions to both his sons,” she explained. She then went on to reveal how she’s helped her partner out financially over recent years as, while he’s incredibly kind-hearted and generous, “his finances haven’t always supported this characteristic”.

“He won’t discuss it. I paid off his mortgage recently and had already given him a lump sum towards it. I have also paid tax bills and credit cards – but he hasn’t changed his spending habits. Although there were no conditions attached to these payments, they were made on the mutual understanding that they were in both our interests and towards our better future together,” she wrote.

The woman insisted she has also been as generous towards his sons, but that has only made her partner feel more financially free. She concluded her plea by writing: “I don’t have children of my own, but I understand a parent’s desire to help their offspring. I would have no – or at least less – objection if these ‘gifts’ were discussed and decided on in a way that didn’t detract from our own needs, lifestyle and plans.”

In a fairly blunt and honest response, expert Annalisa Barbieri picked apart the generous behaviour, insisting while they’re in a relationship, they need to be able to discuss finances together for it to be equal. She wrote: “You can’t have a relationship without communication and you are not a bank.”

In fact, the Bank of Mum and Dad may be growing in popularity as Millennials draw upon their parents’ savings to help buy a house or establish themselves in the wider world but this option is having detrimental effects on Baby Boomers as they struggle to save for retirement.

Last year research revealed that almost two in three parents (65 per cent) are currently making financial and personal sacrifices for their adult children and grandchildren, helping them to plan and save for the future. The study commissioned by Homeloans also found that, of those willing to open up the personal bank to help their kids out financially, 29 per cent were prepared to work past the usual retirement age.

Meanwhile, data compiled by the Household, Income and Labour Dynamics in Australia (HILDA) Survey found that around half of Australians aged between 18 and 29 are still living at home with mum and dad, with young men more likely than young women to make the most of their parents’ generosity. Therefore, if you’re willing and ready to share the space again, this could be an excellent plan to help your kids save money, even if its just for six months or so to help them avoid rising rent costs and build up their savings.

Another great way to help them save could be to offer to look after grandkids, which in turn can help to save your children a bucket load, especially with the increasing costs of childcare. There are bonuses on both sides with the kids’ well earned cash going straight into the savings, while you get the enjoyment of hanging out with the grandchildren and building relationships.

There is research to prove the benefits of granddads and grandmothers taking on childcare duties with a survey by finder.com.au showing grandparents were collectively saving working families very close to $2.3 billion a year in childcare fees. Finder‘s analysis of Australian Bureau of Statistics (ABS) data also found that 900,000 Aussie children (aged 0-12) are cared for by their grandparents instead of attending formal daycare.

What would you do in this situation? Do you still support adult kids?