Income strategies compared: Is an annuity, shares or term deposit the winner? 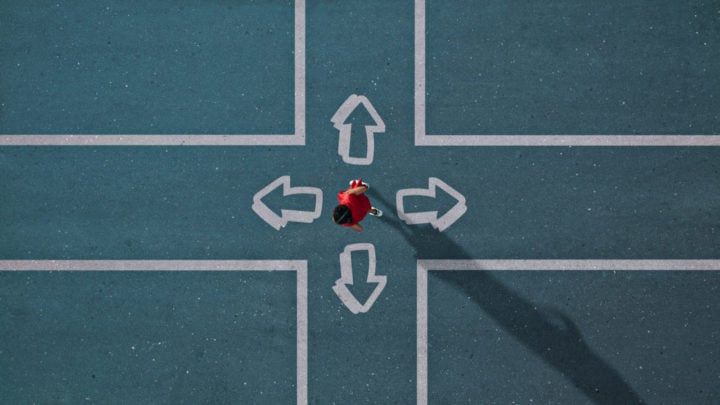 Which path will you go down when managing your retirement income? Source: Getty.

In my recent article Low rates are destroying more retirement incomes than the GFC ever did, I described the massive problems for conservative investors trying to obtain a reasonable amount of income from their portfolios. This is particularly the case if they are inclined to invest only in bank accounts and deposits.

This article takes a step further and looks at some alternative strategies for a theoretical retiree.

In this case I have chosen a homeowner couple (both aged 66) who have $1 million in their investment portfolio. This includes $50,000 in the bank and $950,000 in super. They need around $52,000 a year after tax to meet their ongoing living costs and  have no debts.

To keep things simple, I have avoided dealing with issues such as replacing motor vehicles, allowing for the costs of aged care or substantial costs associated with maintaining the home. In this regard, I have assumed that the couple remains in their home until they pass away.

I appreciate that there are many more possible combinations that can be used, including allocated pensions, also known as account-based pensions, but I am trying to keep things simple in this analysis and as the couple would pay little or no tax, an allocated pension does not change things much.

I have set out below a chart which shows a comparison of the income received from each of the three scenarios up to when the couple is 93. Life expectancy for a male age 65 is 84.22 and for a female age 65 it is 87.05 so these scenarios more than account for the longer lifespan that cause many over-60s to worry their retirement funds will run out.

You will see from the chart above that the scenario which produces the most income is the second – where the couple uses a lifetime annuity purchased with their superannuation money.

But where does this extra cash come from? The table below helps to answer this. It shows income and expenses for each strategy in the first year (2019) and then in the tenth year (2029).

You will note that the use of the annuity (strategy two) gives an immediate entitlement to the Age Pension because only a portion of the assets and income is counted towards assessing the entitlement of the couple to Age Pension.

The other strategies initially give no age pension because the amount of assets is above the maximum.

Eventually, though, the couple in the first and third strategies do become entitled to Age Pension payments. The analysis shows that they would start to receive age pension at age 69 in the first scenario and at age 72 in the last scenario. It should be noted that under all three scenarios the couple is able to meet their income needs through to age 93 even allowing for inflation, but at what cost?

So, on the surface, it looks like the annuity scenario may be the winner? Look at all that extra cashflow!

But what is the catch I hear you ask? Now let’s have a look at the three scenarios comparing the amount of assets (adjusted for inflation) that is available to the couple over time.

When you look at this chart, you will note that the most effective scenario for protecting capital is strategy three, where 50 per cent of the portfolio is held in shares and the other 50 per cent in cash and deposits. This strategy involves taking the most risk.

The other two scenarios both result in a substantial decline in capital. This is hardly surprising, because in the first scenario the couple only produces a cash flow of $14,750 but they need $52,000 a year. This means they will have to spend an increasing amount of their capital every year to make ends meet.

In the case of the annuity, we have a very different situation. For the purpose of this exercise, I obtained an actual annuity quote from a large annuity provider in Australia. I chose a lifetime annuity so that the couple need not worry about outliving their capital as the annuity will continue to pay them however long they live.

When the first of them passes away, the survivor will continue to receive two-thirds of the annuity income until they too die. However, once both of them have died, there is no capital available to their estate unless they die before their life expectancy – not a pleasant thought.

The idea of a lifetime annuity is to cover the risk of living too long and not dying too soon. The annuity provides a regular annual cash flow of $38,690 (paid in monthly instalments), which increases at 2.5 per cent per annum for as long as they live.

I undertook an analysis to determine what rate of interest is effectively being paid by the annuity provider on the couple’s capital in these circumstances.

It may shock you to find out that the effective interest rate is negative 0.749 per cent. This is because, at the moment, the rate of inflation shown in the quote (2.5 per cent) is significantly above the rate of interest available for long-term deposits (1.5 per cent). Under the terms of the annuity, the couple can access their capital prior to their life expectancy in limited circumstances but the withdrawal value declines rapidly over the period of the annuity if they live until they reach their life expectancy.

Annuities are extremely complicated financial products and it is essential that you obtain advice before deciding to use them. They offer both advantages and disadvantages that will vary greatly from individual to individual.

The results from each of these scenarios is very different in terms of cash flow and the value of the assets over time. So, are you confused yet?

Having seen all this information which strategy would be best for you? As usual the answer is – it depends. It depends on a whole range of issues including:

Remember, there could be other possible strategies as I only chose these three for comparison purposes. It is important to note that there are many factors (sometimes counteracting each other) that impact these projections and which can change over time, including:

This is why it is important to consider obtaining advice from a qualified, non-conflicted source before choosing a course of action. This could make the difference between disaster and a successful financial outcome.

Do you know how you'll meet your retirement income needs? Have you considered annuities, shares or term deposits as options?