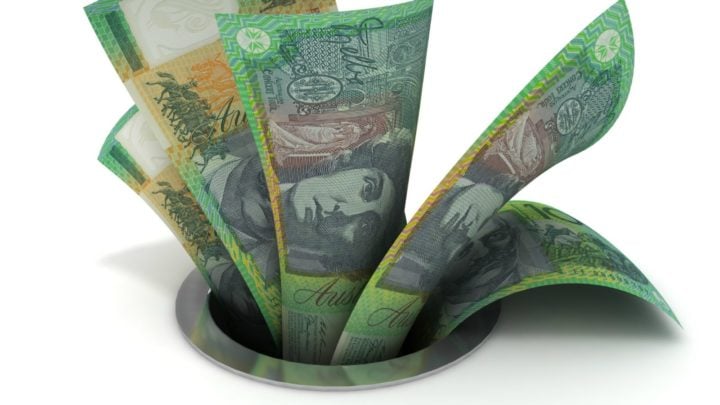 Let the sunk cost fallacy rule your investment decisions and in some cases, you may as well consider it money down the drain. Source: Getty

All of us, in one way or another, are investors in financial markets.

That means that increasing your understanding of how buy or sell decisions are made is more important than you think. Possibly the most important thing of all is to understand your own decision-making processes and in particular your built-in biases – we all have them and it is part of being human. The ancient Greek aphorism ‘know thyself’ remains applicable today, as does Alexander Pope’s observation that ‘to err is human’ ….

Understanding how and why humans make decisions is a fascinating area of study and has resulted in the development of behavioural science and a particular branch of study for investors known as behavioural finance. One of the acknowledged forefathers of this area of study is Daniel Kahneman, who is the only psychologist to have won the Nobel Prize for Economics and has an international bestseller – Thinking Fast and Slow – that explains much of his work.

Kahneman and his colleagues noted that, as humans living in highly complex environments, we often need to make fast decisions involving massive amounts of information. In order to do this, we use mental rules of thumb or shortcuts that are known as heuristics – this happens subconsciously so the decision process is speeded up. These shortcuts play an important role in daily judgments and decision-making processes. Without them, life as we know it would grind to a halt. For example, we can safely cross a street without accurately analysing the speed of all approaching cars. Children learn quickly how to do this long before understanding any physics.

However, the use of heuristics may also lead us astray and leave us prone to biases. Scientists have defined almost 100 of these biases. In fact, a debate continues amongst academics over whether these shortcuts and biases may serve to help us or harm us. Certainly, when it comes to investing there is strong evidence that these biases can harm rational decision-making. So, let us have a look at some of the main biases and consider how we may be able to moderate our behaviour to avoid making the same old mistakes again and again.

Let’s start with the ‘sunk cost fallacy’ or bias.

In economics, a sunk cost is any past cost that has already been paid and cannot be recovered. We commit the sunk cost fallacy when we can continue with an investment as a result of previously invested resources such as time, money or effort. This is closely to related to the ‘status quo’ bias, which results in us remaining committed to a previous decision even when it is clear it is not in the individual’s best interest.

These biases are found in a wide range of areas, as you can see from the above examples. For example, research shows that the majority of people will stick with an existing goods or service provider (such as a bank or an energy supplier) even when they are aware that a better offer is available. It is difficult to understand this inertia because the decision to stick with the status quo is often not in the best interest of the decision-maker. But Kahneman observed that people feel greater regret for bad outcomes that result from new actions taken than they do over bad outcomes that are the consequence of inaction – go figure!

In an investment sense, the sunk cost fallacy means people will hold on to an investment for way too long in the expectation that the price will improve in the future, even if all relevant information points to the opposite outcome.

I was asked to be expert witness in a court case involving an individual who had invested almost all his wealth in a single listed company that had a single asset, that asset being a goldmine in south-east Asia. The investor was suing the mining company and its board as he felt he had been misled about the investment. But as the bad news had continued to roll in and the share price continued to fall, the investor had decided to not only hold his investment, but also buy more shares.

This process of continuing to buy shares as prices fall is known as averaging down. This is an example of the sunk cost or status quo fallacy. In this case the investor continued to hold the investment until the price fell to close to zero to protect his investment – the opposite occurred and he lost the lot. During the course of the case, he often quoted the guru Warren Buffett, saying that Buffett’s philosophy was to find good investments and hold them for the long-term.

But in my own research, I found this interesting quote from Buffett in relation to the sunk cost or status quo: “Should you find yourself in a chronically leaking boat, energy devoted to changing vessels is likely to be more productive than energy devoted to patching leaks”.

Knowing when to walk away from an investment of time, money or emotion is an important skill but we often act counterintuitively and against ‘better judgement’ because we are hardwired with these behavioural biases. So how do we try to avoid or moderate this behavioural bias?

Firstly, ask others who you know and trust. An external perspective is often more objective than an internal one. When it comes to money there is no better option than to obtain independent professional advice as this is often the best way to avoid becoming your own worst enemy and making inevitable but ill-informed decisions. (In later articles I will discuss other important behavioural biases that affect our ability to make good decisions about our investments and provide some ideas about how to better manage these behaviours.)

Meanwhile, it is interesting to note that there is some relatively new research in relation to moderating our more damaging instincts that involves the use of ‘nudges’ or ‘boosts’.

A classic example of nudges is the use of reminders or labels on services and products. Another example in relation to investments are default positions in superannuation funds. Where an individual does not make an overt decision about their investment choice, the default position will activate, usually based on a person’s age. Typically, these nudges are to avoid inertia or other self-destructive behaviours.

Do you find the sunk cost fallacy affects your decisions on financial or other matters? What other biases do you think you may have when it comes money?