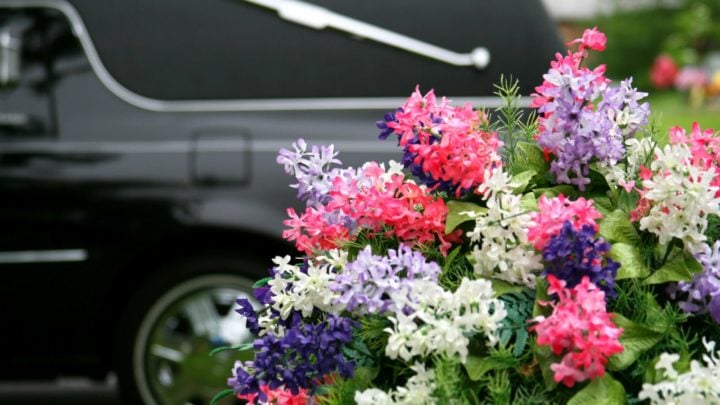 Religious ceremonies are declining in popularity, according to recent research. Source: Getty.

When it comes to funerals, gone are the days where you would simply book a religious service or the local crematorium, followed by hosting a self-catered wake in the home of a loved one.

These days there are a plethora of options when it comes to farewelling someone dear to you, from green funeral choices such as biodegradable coffins and seed pods, to less conventional requests such as having ashes made into jewellery, tattoos and even fireworks.

Last month, industry research company IBISWorld revealed that funeral directors across the globe are increasingly straying away from religious services and instead offering innovative alternatives to families.

Funeral directors across Australia are also getting on board with these changing trends and, rather than offering a traditional blanket option for all, are embracing new trends in order to differentiate their services from the competition.

“Religious services have declined in popularity among many demographics and friends and family have increasingly looked to new and unique ways to celebrate the lives of the deceased,” IBISWorld Senior Industry Analyst Tom Miller said in a statement.

Many over-60s are also opting to forego traditional or religious ceremonies, instead outlining more unusual requests to their loved ones for how they wish to be laid to rest when the time comes.

A recent poll of almost 100 Starts at 60 readers showed that the majority of people aren’t fixated on the idea of planning their own funeral, with 54 per cent actually claiming they “don’t mind” whether they have a traditional send-off, claiming they would be happy for their nearest and dearest to make all of the decisions for them.

In addition to this, 26 per cent said they would rather have a “unique service”, with green burials emerging as one of the most desirable alternatives.

Seed pod burials are also growing in popularity as Aussies become more conscious of the environment, and they emerged as a common alternative choice in the community poll. The burial method sees people laid to rest inside organic, fully biodegradable pods, which are then buried beneath the earth with a tree or sapling planted directly above them. As their bodies decompose, the tree will be provided with nutrients to help it grow.

One reader said: “Either, ashes scattered at sea, or ashes in a tree seedling pod and planted.” While another commented: “I want to be cremated then my ashes buried while you’re planting a tree.”

While several readers revealed they have actually signed up to donate their bodies to medical science, with one telling us: “I have donated my body to Newcastle University – I was always told I would amount to nothing – but I showed them as I am going to Uni ha ha – and no funeral at all – bonus!” Another said: “Off to the Uni wet lab for me – being useful!”

Other suggestions from readers included having their ashes scattered on their garden at home with no need for a formal ceremony, while others suggested they’d like their surviving friends and family to throw a “celebration of life party” rather than a funeral.

However, one fifth of those surveyed said they would prefer to stick to tradition when it comes to their final farewell.

Read more: Ditch the funeral director? Aussies could save thousands with DIY services

The research released by IBISWorld also showed that, while more ‘out-there’ choices are on the rise, cremations have also become increasingly popular, with approximately two-thirds of deceased Australians being cremated, rather than buried, over the past five years.

“Traditional burial services can have a significant effect on the environment with embalmed bodies and traditional coffins taking prolonged periods to break down,” Miller added. “Additionally, cremation has significant requirements and has been linked with particulate and harmful mercury emissions into the atmosphere (caused by incinerating fillings in teeth).”

Have you given any thought to what you’d like your funeral to be like? Would you prefer a traditional service, or something more unique?