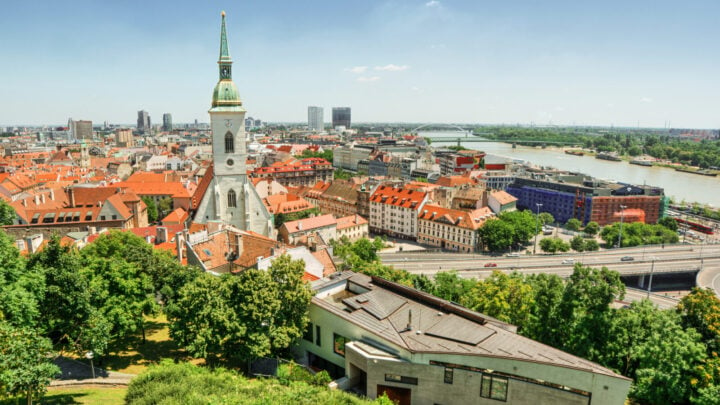 A cold morning was predicted but by the time I made it out, it was a perfect day. Not a cloud in the sky, not a breath of a breeze, warm in the sun, cool in the shade.

I wandered round to my coffee shop, hoping for some breakfast as well as coffee, but was disappointed they only had sweet treats. I was determined not to resort to McDonalds, so I ordered two treats. I was still early for my walking tour. I needed to stock up on food. I needed lunch for today, and breakfast and lunch for tomorrow. I bought sandwiches, as well as two tiny bread rolls for the ham and cheese I have left, three pastries and splurged on a limoncello dessert. Probably real limoncello if the price was any indication! Checking the time, but not wanting to carry this load on the walking tour, I dashed back to my apartment, unloaded everything except the 25 per cent off pack of sandwiches (I still can’t resist markdowns), and made it to the meeting spot for the free walking tour in front of the statue of Hviezdodslav.

Simona, our guide, told us a little about him. We learned more about Slovakia’s chequered history; the Candle Demonstration that occurred in this square in 1988, which precipitated the Velvet Revolution the following year, the collapse of Communism and the fall of the Berlin Wall. Czechoslovakia was split peacefully in 1993 into Czech Republic and Slovakia. That was just recent history. Bratislava and Slovakia have had, like many places in Europe, a turbulent history. Political unrest still exists because of corrupt government officials. Just last year, an investigative reporter and his fiancée were murdered; the perpetrators have not yet been brought to justice.

With all the facts about Slovakia’s history, the Nazi occupation, the liberation by the Soviets, Simona included personal anecdotes of her own family; how her great-grandparents hid a Jewish family during the World War 2. The family survived and the four-year-old little boy became one of Slovakia’s top neurosurgeons.

She also told us of some strange Slovakian traditions. On Easter Monday, all of the women and girls stay at home and the men go around visiting their friends and relatives with a bucket or bowl of water and a willow switch. They throw the water over the woman who answers the door and beat her (gently) with the willow whip. She responds by giving them gifts: chocolate Easter eggs or even money. It doesn’t sound very fair to me, but the belief is the water and whip will give the women the gift of beauty. I’d rather have the Easter eggs! Simona told us her little brother collected 150 euro from his female relatives last Easter!

Another strange tradition involves Christmas. The family catches a carp, a fish living in muddy rivers and lakes, but to make it edible for Christmas Eve, they keep it alive swimming in fresh water in the bath for the days leading up to Christmas. It amuses the children; they feed it and treat it as a pet. They kill it to be eaten on Christmas Eve dinner and the children must eat all of their dinner before they can receive their presents from under the tree. Of course, they are in a hurry to get to their presents, but they must eat slowly as the carp is full of small bones, and they don’t want to get a fishbone caught in their throat. Maybe this is meant to teach them patience.

The third strange tradition is not quite as strange, but parents must name their child one of the name days of the year. Each day has a name day, and the parents can choose one of 365 names. The child then celebrates a birthday and a name day in much the same way. Because so many men and women are called Mikhail or Mikhaila, their name day often becomes a festival for a few days! So much celebrating! Only recently, you have been allowed to choose a foreign name, but it must be a real name with a real history; you are forbidden to call a child Apple here! My name day (Adriána) is 26 June!

Sorry if I bored you with this, but I found it absolutely fascinating, so much so, I didn’t even notice the state of my feet until we reached the Blue Church – my favourite. I really wanted to sit down but the church was closed, and I didn’t have the energy to hoist myself an extra inch to sit on the wall as others did. And I still had to walk back to my apartment!

After bathing my feet in a cold bath, I made the supreme effort to put shoes on and hobble down to Koun to experience “the best gelato in Bratislava”. It has a Trip Advisor 4 and a half stars award on the wall, and it lived up to its reputation. Not cheap; €5 for a triple serve. I sampled the sesame seed and honey, the elderflower and poppy seed, and the cinnamon flavours. My favourite was definitely the sesame seed and honey!

Such a shame my bus to Budapest departs at 11.05am and Koun doesn’t open till 11am!