‘How I discovered the secret to England’s famed Cheddar cheese’ 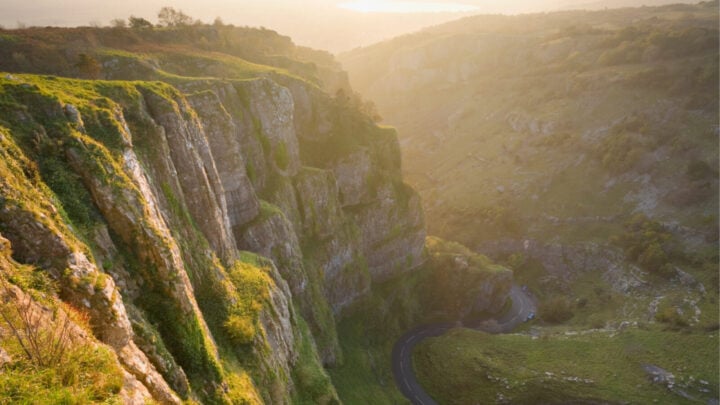 There was a time, many years ago when I used to enjoy going hiking with mates of mine in the Mendip Hills a few miles south of Bristol. This is the range of hills which incorporate, within their folds of rock, a small village which is famous throughout the world because of the product that was originally produced here and here alone, and it still is to this day, though not alone I’m afraid.

The product I am referring to is Cheddar cheese, which must, I would guess, be one of the most prolific of all cheese types in the world. Grocery shops and supermarkets everywhere always stock it, it is the basic cheese offered on airlines as snacks and it is even, in a rather highly processed form, to be found in a SuperMac!

I haven’t been able to find any information about why Cheddar cheese is so popular and why it was made there in the first place, but I do know the village was famous for the quality of its cheeses as early as 1170, so it must have been produced there long before that date, to have gained such a reputation.

I would suppose that the product was made there for several reasons, not the least being the position of the village right on the join between the Somerset Flats and the Mendip Hills, and especially at the mouth of Cheddar Gorge, the flats being rich pasturelands, providing good feed all the year round and cows making an exceptional quality of creamy milk, while the hills caused useful amounts of rain to fall, due to the south westerly prevailing winds, arriving after a long journey over the Atlantic Ocean and its Gulf Stream, with the gorge channeling all this fresh water right through the heart of the village.

My two friends/workmates and I used to drive down to Blagdon, on the north side of the Mendip Hills, and the site of one of Bristol’s major water supply reservoirs, where we’d leave the car and start climbing the steep northern slope of the hills. After a kilometre or two the slope would level off somewhat and once we had regained our breath we could enjoy magnificent views, north to Bristol, some 20kms away and westwards to the Bristol Channel, about the same distance as Bristol.

Then the hike proper commenced, over typical undulating countryside, sometimes farmland, with wire or hedgerow fences, sometimes open moorland, a lot of it bare limestone, most topsoil having been swept away by prevailing winds over many centuries.

There is very little in the way of civilisation up there, apart from a few stone walls, a scattering of cattle and sheep, and the occasional farm house, but right in the centre of this unforgiving landscape, there is a surprise! It is a motor racing track and it draws large crowds to the area several times a year, not the sort of clientele you might see at the Formula One extravaganza’s, but more of a fun afternoon out with the family really. The track for most of the day is oval, and all sorts of people bring their ‘bangers’ up there to get one last thrill out of the vehicle before it goes to the wrecker’s yard; but the last race of the afternoon is what everyone really comes for. The track is then changed from an oval to a large figure eight!

The race lasts as long as there is one car running, which can take up to an hour (but not usually!) because each circuit includes crossing twice over the X formed by the centre of the eight. All is well at first, but gradually, one car after another gets T-boned, and by the end the whole circuit is littered with the total wrecks of about twenty or thirty old cars. It’s a lot of fun for both the drivers and the spectators. I hasten to say, the track wasn’t open on the days we did our hiking!

Anyway, a few hours after we started, we would walk down the whole length of Cheddar Gorge and go into one of the several pubs the village possesses and satisfy the big appetites the walk had given us, washed down with a lovely, cooling ale.

Then it was back to the hiking again, with the Gorge seeming much steeper than it had on the way down and, on the last occasion we did it we were severely hampered by a very heavy rain storm, luckily not with thunder because I don’t much like the idea of being out in one, on top of a hill! Luckily the storm didn’t last too long and we were able to shelter in a barn through the worst of it, so we didn’t soak the upholstery in the car during the ride back to Bristol.

The Mendip Hills – a great place for a hike, if you’re ever on holiday in England, (but take a raincoat)!

Have you visited this part of England?