‘Lost, sore and out of pocket: A solo day in Tallinn almost got the better of me’ 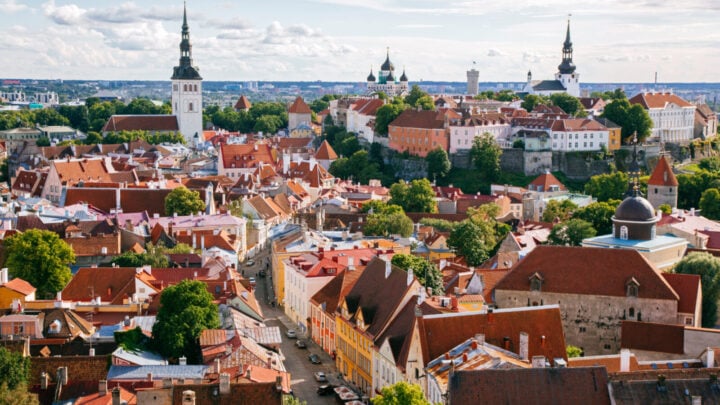 Adrienne hits the streets of Tallinn for a big day out. Source: Adrienne Beaumont

What an exciting, exhausting, expensive day in Tallinn, Estonia! Full of confidence, I set off to the Kristiine Centre, a shopping centre just 2.1 kilometres from my hostel. I needed to replace my two-week-old carry-on suitcase. It was 4C, so I thought a brisk walk would be just the thing on this beautiful sunny day. Suffice to say, I walked one street too far but managed to arrive 3km later and located the Samsonite shop without any difficulty.

Using the refund from Strandbags for my broken carry-on case, I chose a two-wheeler American Tourister case. Happy with my purchase, I headed to Prisma, a huge supermarket and department store, and bought three rhubarb danishes marked at 30 (cents I assumed). But not so – 30 was the code and they cost 91c each! Needing something to drink, I chose what I thought was a small iced coffee. The container was brown and had lättgrädde written on it, and a picture of coffee. Iced coffee right? Nope – it was the cream that you put in coffee! I drank it – delicious!

Using the free wi-fi, I found that Solaris Shopping Centre had a Pandora shop, and thought what the hell, I’m here once and the sun is shining, so called a Bolt. Bolt is the cheaper version of Uber and was actually founded in Tallinn in 2013. The English-speaking Bolt driver delivered me right to the door of Solaris where I bought the beautiful gold Alexander Nevsky Cathedral charm for my travel bracelet. My budget is right out the door and across the other side of town today! To be fair, it was only €4 dearer than the silver cornflower charm, which is the national flower of Estonia. The sad part was I could have saved €15.80 if I’d had my passport with me! Probably could have saved that on my suitcase too!

I am out and the sun is still shining so I call a Bolt to get me to Telliskivi Creative City on the other side of town. It’s quite spread out and after being dropped off, I walk in completely the opposite direction. Not doing well today! Must be the sunshine that’s addled my brain. I want to see the Fotografiska Exhibition. The €10 entrance fee covered three exhibits: Kirsty Mitchell’s Wonderland, Alison Jackson’s Truth is Dead, and Fuding Yang’s Moving Mountains.  The first two were amazing, but I didn’t quite understand the Chinese one.

Catching the elevator to the sixth floor, I discovered an upmarket restaurant where I didn’t dine but salivated. I went out onto the deck to admire the view and to figure out my way back to the train station because I know my way back home from there. I just have to follow the tracks back to the station. Simple! The only trouble being I ended up in a construction site and on the wrong side of a six-foot fence.

I was quite dismayed at the thought of having to walk all the way back again, but I couldn’t see a way out. An enterprising young man came along, saw my predicament and lifted one of the sections of fence, and beckoned me through the gap. I was outta there quicker than you can say Jack Rabbit. I was actually quite scared – there were cranes and equipment working and I was imagining something coming down and making a rhubarb danish out of me! Not sure if my insurance would cover that! I had no right to be there, but why wasn’t the site closed from the other end? By the way, I still had my new suitcase with me!

After passing through the underpass to the other side of the road, I was confident I knew the way from here, but apparently I didn’t because I ended up walking almost all the way around the outside of the Old City. There was a point where I could have climbed about 300 stairs up to the Presidential Palace, but I kept walking until I could not take another step and called a Bolt. I had only 3 per cent charge left on my phone! Almost panicking, I came close to tears at this stage – my feet were screaming ‘no more’ – and no wonder, I had walked almost 10km, most of it carrying or dragging my new case. What a day! But, once again, I’ve lived to tell the tale!

Have you ever been to Tallinn?