‘Castles, churches and plenty of charm: Our rainy day in Slovenia’ 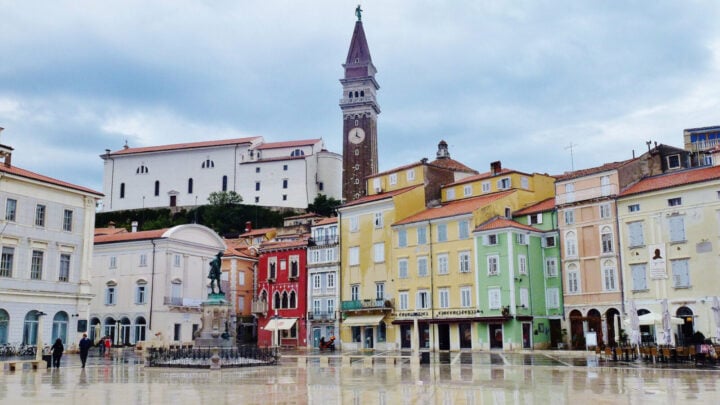 An Adriatic cruise from Venice to Rome enticed us with the promise of visiting not only Italy, but also Slovenia, San Marino, Croatia, Montenegro and Malta. Our first stop was the city of Koper, Slovenia. This city is Slovenia’s only commercial port and only major city on its 47-kilometre Adriatic coastline, and is only five kilometres from the Italian border. However, instead of taking a ship’s tour to Koper, we arranged a tour online with a company called Slovenia For You to Lake Bled and Ljubljana, with the town of Piran as an added extra.

When we disembarked, the tour guide escorted us to a bus that took us an hour and a half into the county to Lake Bled. Unfortunately the weather was bad – with rain and limited visibility. Our guide pointed out to us that the mountains in the distance were actually in Hungary, but it was so indistinct. Lake Bled is apparently one of the most picturesque places to visit in Slovenia, with a castle perched 130m high on a rocky precipice overlooking the lake, with a pretty little island in the middle of the lake complete with a cute church dedicated to Our Lady of the Assumption. When we reached Lake Bled village, we were disappointed to find that seeing the little church on the island was nigh impossible. Tourists usually hire boats to cross to the island or do hiking tours around the lake, but that was not an option in wet weather.

The plan was also to visit the castle. From the carpark at the base of the castle to the main gate the path was very steep and slippery in the wet, but it was worth the climb. The castle is the oldest in Slovenia, dating back to 1011. At the entrance there is a drawbridge over a (filled in) moat. From the lower courtyard there are various Renaissance-style buildings, which would have housed the servants, and a Romanesque tower. This connects to an upper courtyard via stairs where there is a recently renovated Gothic chapel and museum chronicling the history of the castle and its occupants. We were greeted by staff dressed in traditional period costumes, including two men dressed as a swordsman and an archer, complete with goatskin quiver for the arrows.

We were then free to wander around the area. The views from this courtyard were unfortunately lost to us that day but photos in a display in the information centre showed us what we were missing. As well as a gift shop and printing shop there is also a wine cellar, equipped almost exactly like it was 500 years ago, where we were offered a few samples of the local wine. Finally we retired to the restaurant where we had a morning coffee. Our guide assured us we should try the local dessert delicacy – Blejske Rezine – which we recognised as a creamed vanilla slice. It was delicious.

Half an hour later, in the capital city of Ljubljana, the sun at last shone, enabling us to enjoy a walk through the streets. The central part of the old city is quite beautiful due to its Baroque and Art Nouveau architecture. There are even archaeological remains of the ancient Roman city of Emona visible as you go down the underpass steps off Congress Square.

The view along the Ljubljanica River reminded me very much of the canals of Bruges in Belgium because of the way the buildings came right up to the edges of the waterway and canal boats plied the river taking tourists for scenic tours. One of the attractions we saw here was the unusual Triple Bridge across the river. It had been created to provide the original single road bridge with two pedestrian bridges at the sides and is decorated with stone balusters and stone lamps on all of the three bridges. Another famous bridge is the Dragon Bridge, with two ferocious-looking dragon sculptures.

The main drawcard for the city is the castle, Ljubljanski Grad, reached by a funicular railway – which looms over the town. We did not have time to go there, but we did manage to walk around some very pretty squares and admire the gardens and architecture. Two buildings in particular stood out – the pink façade of the Franciscan Church on Prešernov trg Square, and the Baroque Cathedral of St Nicholas with its twin spires and dome.

The central market was a welcome and colourful sight. Stallholders were preparing to pack up their fresh fruit and vegetables, but the lunchtime outdoor food stalls were still busy with customers who, like us, were keen to try the local specialities – such as Kranjska sausages. There is also a covered market, housed in a grand colonnaded building. Here we walked through, keen to see the different types of meat, fish and cheese offered. Outside, a vending machine took our fancy, offering ‘genuine fresh milk’ from two different farms available to be poured into your own bottle!

On the way back to Koper we took a detour to the seaside town of Piran, as it’s such a cute town. Formerly a fishing village, the old inner marina was filled in and is now the Tartini Square, with a monument in memory of Giuseppe Tartini, a violinist and composer. Nearby are various important buildings, such as Tartini’s house built in the 14th century and one of the oldest in town.

The city is walled and bears some resemblance to Venice with its narrow winding alleys and medieval architecture, probably because it was once part of the Venetian Republic. While we had the chance between rain showers, we walked up the hill above the town to see its biggest and most important church, the Church of St George, where there are magnificent views over the Piran peninsula. The tour took a full day, leaving us no time to look at Koper itself. However the time spent in Ljublijana and Piran was highly worthwhile and we were very pleased we did it.

Have you been to Slovenia? What did you love about it?