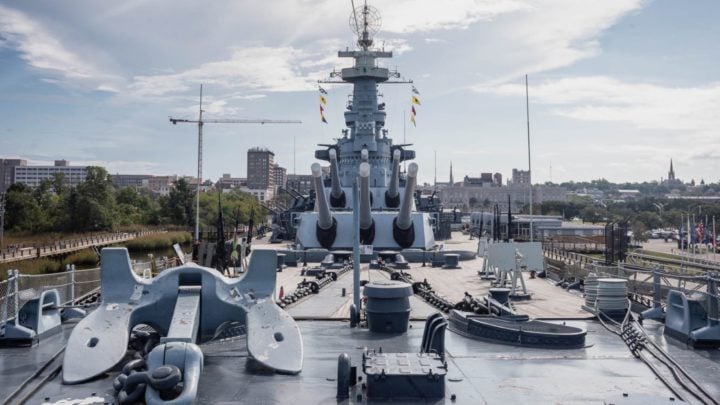 The USS North Carolina in Wilmington, United States is an impressive ship even though she has been a floating museum for over 58 years. The most highly decorated US naval ship ever, USS North Carolina participated in every major offensive battle in the Pacific during World War II, including the surrender of the Japanese in Tokyo Harbour in 1945. She earned 15 battle stars and the nickname ‘The Immortal Showboat’.

It is therefore no surprise that this important National Treasure should become one of the most visited tourist attractions in the US. But the most amazing twist to this story is that this magnificent battleship was destined to the scrap yard early in 1960. As part of a coordinated plan to convince the authorities of the day to preserve rather than scrap the namesake of their State, the school children of North Carolina were mobilised and pooled their ‘nickels and dimes’ in their contribution to ‘Save our Ship’.

Rather than looking to the state government to fund this enterprise, a plan was devised to create a North Carolina Navy and the ‘Save Our Ship’ fundraising campaign began. From each of the state’s 100 counties, they would select an ‘admiral’ responsible for seeing that their counties met a fundraising quota. People who gave $100 would also be named an admiral, earning a certificate and lifetime free admission to the ship. The governor suggested they involve the schools, so every child who brought in a dime received a pass for free admission. Of the 1.1 million North Carolina schoolchildren at that time, 700,000 gave at least a dime. That’s a 64 per cent participation rate in crowd funding well before the internet and social media had even been conceived! Wow!

In 1961, I was turning eight, so I can imagine how fantastic it must have been for the school children of the day to be involved in something that was so historic, larger than life and so important to the state and the country. All those children are part of the Baby Boomer generation and just like us, they too are now over 60 and many would be proud grandparents. What a wonderful legacy to leave for their children, grandchildren and future generations.

The Save Our Ship campaign raised nearly $330,000, about $2.4 million (AU$3.6 million) today, more than the budget required to relocate and refurbish the ship. Among those who were named ‘admiral’ was none other than president John F. Kennedy.

What makes USS North Carolina especially worth a visit is that you can either have a guided tour or self-tour the vessel with an audio prompt. We opted for the self-guided tour so we could clamber into any space that captured our imagination. Take your time as there is no hurry. Best of all you can gain access to 90 per ent of the ship from the bowels of the engine room to the conning tower, including crawling into the three cavernous turrets.

The ship is one of the two North Carolina class battleships built for the US Navy between the two world wars when the formidable power of air craft carriers had still not been tested in battle. As well as being large (36,000 tonnes), they were fast too with a maximum speed of 28 knots. Designed in the mid-1930s and commissioned in May 1941, USS North Carolina was very technically advanced and state of the art for its time, featuring analogue computers that controlled the firing pattern and aiming of the nine massive turret-mounted 16-inch cannons. At 18.7 metres long each was, and remains, the longest rifled cannon ever fitted to US naval ships. They could propel a 1,200-kilogram (2,645-pound) projectile 37 kilometres (23 miles) to its target — well over the horizon, which is 5km at sea level. Using elevators to load the shells and gunpowder bags to the turrets and the program from the analogue computers, the nine rifled cannons could each fire a shell every 30 seconds. Heaven help those at the receiving end as the Japanese learned at the Battle of Iwo Jima.

The vessel also had two catapult mounted Kingfisher spotter aircraft to look for enemy ships, assist with fire power coordination and report on the success of shots fired.

With a complement of 2,300 men this ship was a floating city complete with dentist, barber, post office, jail, doctor and infirmary as well as workshops capable of tooling and fabricating any component necessary to maintain the ship. The USS North Carolina became more to her men than a weapon of war and violence. For many it was home and a respite from depression era poverty.

One of the innovations on this ship was an air-conditioning system specifically fitted to keep the gunpowder bags cooled as gunpowder becomes unstable at high temperatures. Now while none of the crew enjoyed the benefits of this unless assigned to the powder room, a happy consequence was that all the crew were treated to ice cream on a regular basis. Life aboard was certainly no picnic particularly as there are no port holes below decks, but I could not help but think it sounded far better than the army stories from New Guinea related to me by my father. No ice cream for them.

From her first battle to the Japanese surrender in August 1945, out of 144 officers and 2,195 enlisted men, only 67 were injured and only 10 died. Despite all the action that USS North Carolina endured it was only damaged twice. One unfortunate incident involved friendly fire from a US destroyer that became a little too focussed on shooting down an enemy aircraft but instead got their own battleship. Some things don’t change it seems.

Wilmington is a lovely city on the Cape Fear River and steeped in history from early European settlement through to the present day. Do yourself a favour and visit Wilmington but don’t forget to spend half a day visiting USS North Carolina. You will be impressed.

What museums and destinations of historical significance have you visited? Do you remember having to save up your money to buy things as a child?