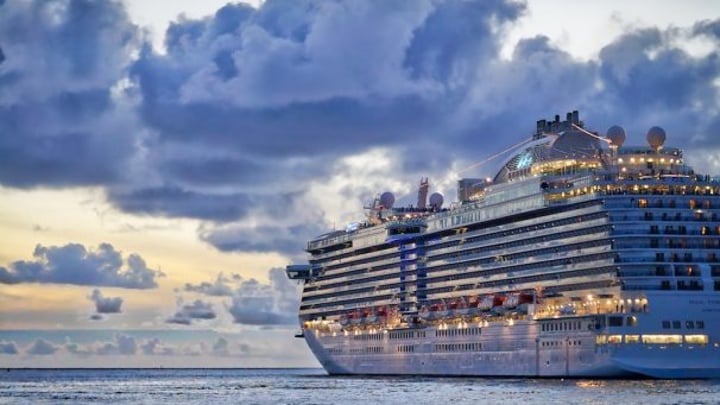 We speak to cruise-loving Brian Winchester, who’s lived all over the world since marrying his childhood sweetheart, Irene, in 1955. These days, they live near Bundaberg in Queensland. “We have lived in Carlyle Gardens Bargara retirement village for the last 27 years,” says Brian, “which have also been the happiest years of our life.”

How old were you when you went on your first cruise?

“We were just married and 20 years old. It was 1955 and only North Sea ports were then available. It was a mere seven-day cruise.”

“How many cruises have you been on in total?

Have you ever done the same cruise twice? If so, where and why?

What’s your favourite port in the world?

“Boca de Valera up the Amazon River. Only 12 houses. The kids were treasures. The place was so small, even the village hooker was a virgin!”

Are there any places you haven’t been that you really want to visit on upcoming cruises?

“I still aim to go round the Falkland islands. Tried three times, but other events have hindered me.”

What’s the one thing you always pack for your times on board that would surprise people?

“A tube of glue! We have used it so often on packs/shoes/straps.”

What’s the most memorable moment you’ve ever experienced during your days at sea?

“Scampering up to a volcano on Easter Island to find… a lake.”

Do you select your cruises based on the destinations, or the cruise line?

“Experience has taught us that the standards of Princess are generally above the crowd, yet not expensive. Love their ‘Zero Tolerance’ policy. Safety for all behaving passengers.”

What are some things you’ve experienced on a cruise that would blow people’s minds?

“Second cruise to The Med, celebrating our 60th anniversary, and renewing our wedding vows on board in a beaut ceremony. Not a dry eye in the crowd!”

Do you ever get sea sick?

“Never. Irene used to get crook leaving Sydney, before we passed through The Heads. If she sat in a green deck chair, I would not find her for days.”

How long do you spend at sea each time?

“Our ideal length cruise is between 22 and 30 days. Because cruise lines have to be profitable in a very competitive industry, it usually means taking two or more cruise back to back.”

On average, how long a break do you leave between cruises?

“Six to eight weeks, because we are doing four trips each year. There are no more ‘rainy days’ for us at our vintage.”

Do you still take other (non-cruise) holidays as well?

“Not at 84 years young! Though we have done seven Club Meds. Now we are lazy and want to unpack just once. Decay happens to everyone, it just looks worse on other people.”

Have you formed any great friendships with fellow cruisers, and do you ever bump into people that you met on previous voyages?

“We always bump into many prior ‘cruising buddies’. On a ship with more than 2,000 passengers on board, we indeed expect to meet up with at least three couples. With frequent cruising, we accumulate dozens of ‘buddies’. Everyone on board has either saved up or gone without to afford cruising. It follows that all of them are focused on having a jolly good time. We are in regular touch with cruising buddies from 14 years ago. The mind replays what the heart can’t delete.

“There’s nothing quite like the stimulation of meeting new people, hearing their stories, discovering the ways in which you are similar and different. It’s like reading a new book. It is enriching, invigorating and makes you feel connected with the world. Connecting with others is one of the greatest joys in life. You do not even need much of a mutual interest. And we’ve been lucky – we’ve never been plagued by feral tree-huggers, God-botherers, whale-savers or loopy gun nuts.

“All the people on a cruise are strangers too. Everybody feels a little socially awkward sometimes. But once the small talk flows, who knows what’s around the corner.”

How do you personally make the most of the whole cruise experience?

“As in life, you get about one third out of what you put in – therefore, volunteer, get involved, do different, eat different, see different. If you don’t want to do different, stay at home.

“In the words of Rudyard Kipling in The English Flag… ‘And what should they know of England who only England know?’ Substitute relevant country for England.

“Also, we like dressing up for dinner – ‘as flash as a rat with a gold tooth’.”

What are some really helpful things to know on a cruise, that you don’t normally realise/get told about until you’ve cruised a few times?

“Loyalty to your cruise line has added advantages, both monetary and in having a large ‘extended’ family.

“Always carry a deck bag. It should contain your camera/band aids/paper/pen/daily news sheet etc. When you go to the buffet, don’t collect your meal and then go hunting for a seat while your food gets cold – instead, select your seats, ‘reserve’ them with your deck bag, then wash your hands, get your food and go straight to your seat. One of the ship-issued tote bags won’t work, however, because they’re all the same colour.

“If you don’t want to catch a cold, wash your hands at least six times daily because there are passengers who bring their snuffles on board and naturally touch the door handles/guard rails with the same hands that have just blown their nose etc.”

Do you have your next cruise booked already? When are where will you go?

“Of the last 22 years, we’ve had only two Christmases at home. This year we will go for 32 days on three back-to-back cruises, initially up to North Queensland, then around the PNG islands and finally around New Zealand. In April we return to Hawaii/Tahiti and iIn October we go ‘round the block’ for 28 days to celebrate Irene’s 85th birthday. Then there’s another cruise next Christmas for 35 days and finally, in April 2020, we go round the top of Australia to Freo and return. Because Irene had a stroke, her doctor prefers her not to fly, so we now limit our cruises to ex-Brisbane and return. But we love cruising for cruising’s sake.”

What’s the best tip you’d give to someone cruising for the first time?

“Make 10 new friends, and all that it entails.”

Read more from Brian: ‘Retirement made me realise my life has been one long, post-orgasmic glow’

Are you travel-mad and 60-plus? Do you have a great story or helpful tips to share? Email them to [email protected] – together with a photo and some info about your travels – we’d love to feature you in a story like this.

You can also join the Travel at 60 Travel Lovers Club on Facebook to talk to fellow travellers and share tips, advice and stories.

Can anyone beat Brian's number of 83 cruises? Let us know!