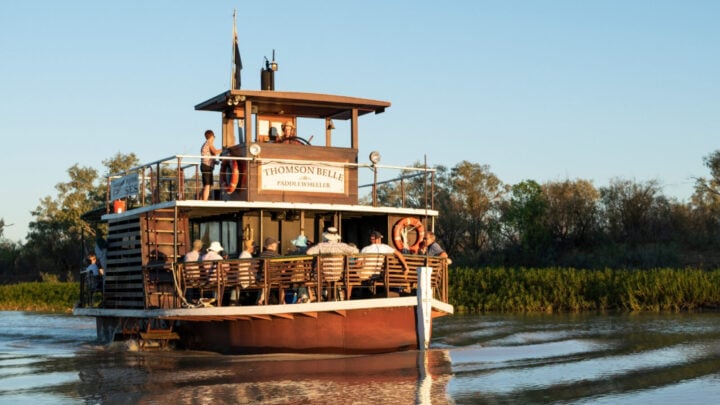 The Outback Pioneers Starlight’s Cruise Experience on the Thomson River buys all its stockman’s dinner ingredients from Longreach businesses, just as local businesses have supported each other for decades.

The outback is a tough place to survive and it’s become even tougher over the past year. The impact of Covid-19 has reminded us just how important tourism is, not just for our family but for many so outback families and communities. If we have another year at half-mast, many of our local businesses won’t survive.

Tourism started for Outback Pioneers when we were getting a lot of long, dry times in the early 1990s. Our family are graziers and so are used to the cycles of drought but I realised we had to do something to supplement our income.

I remember coming into town in the ute with my young boys Jeremy and Lane and they used to count the caravans heading towards Winton. Every year there were more! There had to be something we could do to make them stop here in Longreach a little longer.

We had a few old horse-drawn vehicles out on the station and one day one of the boys said, “Dad, why don’t we take the cart to town and give rides?”.

It reminded me that some years before there was an old fella here called Arthur Tindall who had a Cobb & Co stagecoach that used to take tourists from their motels to the Australian Stockman’s Hall of Fame when it first opened.

He’d been around with his stagecoach since I was a kid. Mum and Dad used to come to Longreach once or twice a year to go shopping and they left me and my brother with Arthur. I had a real connection with Longreach because of Arthur, who was a real larrikin, and because of the days spent with him.

Eventually old age caught up with Arthur and he sold the stagecoach but it always stuck in my mind.

Fun times with stagecoaches and scones

So, in 1995, we started our own stagecoach experience. Back in those days, one of Dad’s old stockmen, Sandy Flower, used to cook scones for the guests to have in the Cobb & Co courtyard after the ride. Sandy was more used to cooking in a camp oven than in the kitchen and some of the scones turned out so rock-hard, we should have thrown them away. But we found another use for them.

At that time, the town dogs were a real nuisance, running after the stagecoach and barking, so we decided to use the scones as ammo! We’d peg the scones at the dogs, which would break their stride and then they’d chew on them – they sure took some chewing! – while we got away. I can promise that no dogs were harmed in the process!

Of course, things have changed a bit since then and we have really good country scones now, as well as some major tourism awards.

Big and small work together in the outback

The Qantas Founders Museum was officially opened around the same time as our tourism business started and I approached them to have a hitching rail for the horses under the 747. Since then, we’ve unloaded premiers, governors and all sorts there with the stagecoach. They’ve only just moved the hitching rail with the latest stage of development – the Super Constellation and the brand new sound and light show.

The graziers around Longreach have long supported both Australian Stockman’s Hall of Fame and Qantas Founders Museum. Those attractions and the Qantas airline itself wouldn’t be here without the graziers, and the graziers need tourism visitors to help support the town – and other towns in the region.

Although at Outback Pioneers we’re the ‘little brother’ to those big museums, we offer a chance to see, smell and taste for real the things you can only look at in the museum. Guests who have done the museums early in their stay often want to go back to them after our experiences because we have given them new insight into what they saw there.

The butcher, the baker and the candlestick-maker

Our visitors – and especially our over-60s, who really embrace this iconic part of the world – don’t just help our family. Every dollar they spend here is multiplied six or seven times.

A motorist buys a new tyre or fills the petrol tank in town. The fella he bought that from buys a loaf of bread from the baker. The baker buys his kids new clothes. The clothes shop owner gets food from the supermarket … you get the picture!

We joke that our company, Outback Pioneers, literally supports the butcher, the baker and the candlestick-maker! Our Starlight’s Cruise Experience on the Thomson River gets through many hundreds of dollars of meat every night for the stockman’s campfire stew, which we get from the butcher, a local family business. The bread we buy for the billy-can lunch and for The Welcome Home hotel in town is from a local family bakery. And you can even buy gidgee wood candle-holders at The Station Store made by my son-in-law Ruben to help support his family!

And our new, heritage-themed accommodation, opening for the 2021 season, is providing employment for local tradespeople and for traditional crafts-people who make some of the special items to help set the scene.

We desperately need you in 2021

All of this is why we are incredibly grateful to the people who made it through to Longreach in 2020 and supported us even though we couldn’t offer our full range of experiences. But we can’t survive another year like that. And many other family businesses won’t survive either.

It’s not only about the money for survival though. It really lifts our morale here in the bush when our city cousins come and enjoy some time with us. When our crew feel they’re inspiring people, making them laugh and giving them a time to remember, it gives them a buzz and a reason to come to work. We love to make a difference and share our incredible outback heritage, which belongs to all Australians.

I know older Australians still get what this is all about and love the adventure of experiencing it for real. We look forward to giving you a very warm welcome. It’s not an exaggeration to say our outback way of life depends on you.

What great outback experiences have you had in the past? What would you still like to experience?