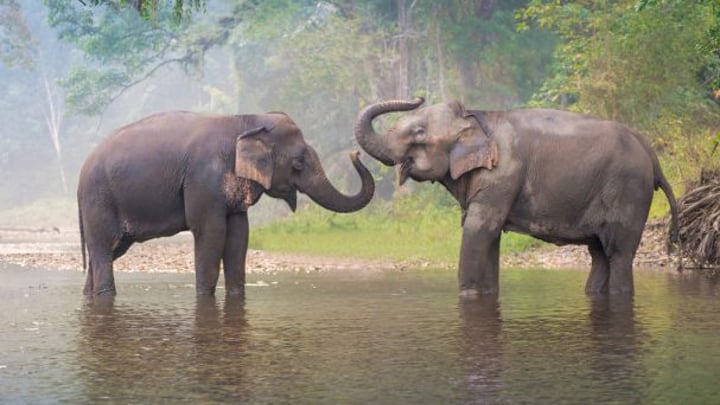 From the majestic elephants of Chiang Mai, to the Orangutans of Borneo’s tropical rainforests, there are a great many animals that call Southeast Asia home. And while there are a lot of opportunities for tourists to get up close and personal with these creatures, not all are ethical encounters. There are some perfectly good animal encounters you can have in Southeast Asia, though, and you can keep your sense of morality and love of animals in tact in the process.

If you have always wanted to see orangutans in the wild, then there are just two places in the world they can be found and they are Sumatra and Borneo. The Sepilok Orangutan Rehabilitation Centre is one of the most popular destinations and this is also where thousands of different plant varieties along with other birds and mammals can be happened upon, too. The orangutans are the true stars here. The centre is home to approximately 80 orangutans and is a care and rehabilitation facility for orphaned and saved orangutans as well as other animals including gibbons, Sumatran rhinos and sun bears.

We’d all like to see elephants while in Thailand, but elephants are often mistreated by their handlers and forced to perform or be ridden by tourists. At Elephant Nature Park in Chiang Mai in Thailand, not only are the elephants taken care of but they spend their days in their own habitat and riding of them is prohibited. As well as educating tourists, the centre works as a elephant rescue and rehabilitation centre and visitors are encourage to help and volunteer in any way they can including feeding, washing and walking these beautiful creatures.

Bring your binoculars, because the Sukau Rainforest Lodge is teeming with wildlife of all kinds. Recognised by National Geographic, you’re likely to spot pygmy elephants, orangutans and proboscis monkeys. The great thing is, though, you can sleep on site in one of the self-contained villas that will have you really feeling in and amongst the wildlife.

The Angkor Centre for Conservation of Biodiversity was created in 2004 and they’ve since been dedicated to rehabilitating all types of animals from the pileated gibbon and the Malayan porcupine to tortoises and the northern slow loris. After the animals have been rescued they are returned to the wild or entered into breeding programs to help endangered species. There are tours each day at the centre, which is just 30kms north of the famed temples of Angkor.

Which animals would you like to see in the wild?